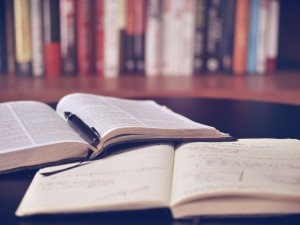 The fifth book in the Sydney Brennan series, Braving the Boneyard, was the longest one to date, even after quite a bit of trimming. In part, that’s because <ahem> I didn’t know where it was going until I got there, and in part it’s because the book involved a more traditional investigation–working from beginning to end in a criminal case–than the previous books. That meant a good chunk of my trimming was the day-to-day legwork.

In the following deleted scene, Sydney is checking out high schools, trying to find out anything she can about her client’s codefendant, Trevor Rose. Snippets of the beginning made the final cut, but most of the scene was summarized in a sentence or two.

Trevor was over a decade younger than Jerome, so in the absence of anything else (other than Kevin, Jerome couldn’t give me the name of a single common acquaintance), I’d figure out where Trevor had gone to school. Hendersenville was by no means a big city, but it was large enough to have several high schools. Without an appointment, no school administrator would grant me time with personnel on a school day. But if I could get access to school yearbooks … It was a long shot, but at this point, I’d take a new long shot over the same old tried and true failure.

I changed back into my jeans and sneakers (changing clothes in cars being another requisite PI skill), pulled my curly hair into a ponytail, and grabbed my innocuous purse instead of my work bag. I look younger than my chronological age, but fifteen years or so out of high school, there’s no way I’d pass for a student. On the other hand, I no longer looked like someone doing a Department of Education audit (do they do such things?) or gathering information for a lawsuit against the school.

Trevor and his mom had been pretty itinerate, and I doubted Trevor was a dress-up-for-school-photos kind of guy. But I hoped that if he’d been enrolled at the school, they would at least have an empty gray box with his name next to it. The morphing hairstyles, even over a period of just five years, were distracting, but I focused on the alphabetically ordered names rather than pictures.

I finally struck pay dirt at the third school. Trevor Rose stared back at me from a senior class made up of mostly black faces. He wasn’t smiling, but the boys generally weren’t smiling. Trying to look tough, I guess. Or maybe deep, and complicated. Trevor looked the latter, like an undiscovered poet, doomed to remain that way until his death as a starving artist at age thirty. He wasn’t on any of the sports teams or in any of the other group photos. I double-checked, but he hadn’t appeared in any of the school’s previous yearbooks either.

I copied the photos of everyone in his class at the library’s handy dandy coin-operated copier. Then I figured, while I was at it, I might as well do the other high school classes as well. Fortunately, it was a relatively small school. I was digging more change out of my purse when I heard a voice behind me.

“You’re not a pervert, are you? Copying pictures of kids.”

A young woman stood, staring at me, with a hand on her hip. She wore black-rimmed glasses, and her straightened hair touched the shoulder of her thin sweater. Being cute had snuck up on her so recently that she hadn’t noticed the change yet. In a couple of years, she’d transform from cute to beautiful. She already radiated confident energy, and the thought of the life ahead of her made me smile.

“Seriously, are you a pervert?”

That’s what I get for engaging in momentary flights of optimistic fancy.

“No, I’m just trying to track someone down.” I pulled the smashed yearbook from the copier and flipped to Trevor’s picture. “Maybe you knew him. Trevor Rose.”

She tilted her head and looked at me suspiciously. “You’re not looking very hard, if you’re looking for Trevor. He’s in prison.”

“I wouldn’t say I know him know him. He lived on our block for a while. I was in junior high, so we didn’t exactly hang out. What’s it to you?”

“I want to talk to him,” I said, which was entirely true but felt dangerously close to a lie. “You know anything about his mom?”

She shook her head. “No. She’s gone. She and Trevor moved, maybe a year before the robbery. But I still heard when he got arrested.”

“Do you know why she moved?”

“I don’t know why we moved last year, so I sure don’t know what went on in their house.” She dropped her eyes for just a moment, a fraction of a second. But it was enough of a tell for me to pounce on.

“I hear a lot of what goes on in my neighbor’s houses. Of course, they’re mostly old people who don’t hear very well, so they yell a lot,” I said. I ignored the copier’s lurch when I leaned against it, keeping my eyes locked on the teenager until she looked away first. “I’m not out to cause her any trouble. Her son’s done enough of that already.”

She looked back at me, hard. “Promise?”

It may have sounded like a child’s request, but I did not envy the person who broke promises to her. “I promise.”

She crossed her arms and worked her mouth around for a good ten seconds before speaking. “I didn’t see them much, but they seemed all right until this guy showed up. I never really got a good look at him, but a couple of nights later I could hear him yelling. This happened a few times, and it got bad enough once that my mom called the cops, but I don’t think they did anything. Not long after that, they were gone. Never even said goodbye.”

“You know what name his mom went by?” I asked.

“No. And I gotta get to calculus.”

“Yeah, that sounds about right. Maybe three years ago—2001—around Christmas. The old guy in the house next to Trevor’s fell off his ladder trying to put up decorations, and when the ambulance came Mom said too bad it wasn’t there for that screaming bastard. Look, I’m gonna be late.”

I tried to hand her one of my cards, but she backed away, both hands in the air. “I don’t want that. Now leave me alone before I start screaming pervert.”

The copier lurched again as I tried to stand, and I knocked over a book display trying to catch my balance. By the time I’d restacked everything I never wanted to know about basic computer programming, the young woman was gone.