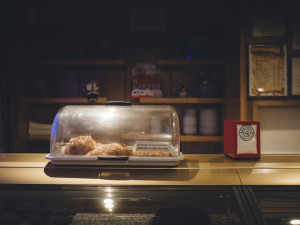 In the final version of Braving the Boneyard, Ralph convinces Sydney to help out on Jerome Adams’s trial after Jerome’s previous attorney has had a heart attack and moved to Arizona. However, I’d started the novel thinking that Sydney would be working with Ralph on Jerome’s appeal. (I used to work on criminal appeals, so that’s the default setting in my brain.) Fortunately, I realized fairly early in the rough draft that Jerome should still be awaiting trial.

This scene was written when Jerome’s original attorney had lost at trial, and Sydney (and I) had a vague sense of something sinister going on, but I wasn’t sure what it was. That’s probably why there are so many words. (Remember, unedited brain purging.) Oh yeah, when in doubt–throw in some pastries.

My first stop was an uneventful one at the clerk’s office, where I picked up copies of the appellate pleadings Roger wanted. The attorney who’d filed them, Steve Metcalfe, had an office nearby. Since it was November, I was able to skim the paperwork in my car without melting or dying of heatstroke. They were mostly records requests that didn’t mean anything to me out of context. Still wearing my Reformed Road Uniform to avoid offending Roger’s sartorial sensibilities (slacks instead of jeans, over heeled boots because it was finally cool enough, and hey—boots), I decided I was presentable enough to drop by the attorney’s office. If I was lucky, I’d catch him while his receptionist was at lunch.

The law office was only a few blocks away, but I drove anyway, preferring the security of having my own traveling office (and pursuit vehicle) at hand. It was part of a strip of businesses, freshly painted with cream exteriors, kelly green fabric awnings, and evenly spaced potted plants the length of the sidewalk. Angled parking spaces faced the businesses. The desired effect was “quaint downtown from a bygone era,” and they’d mostly succeeded. But with several other law offices and a bail bondsman within walking distance of the courthouse, their target audience was obvious. Presumably the bakery next door catered to the courthouse crowd as well. I found myself checking the bakery’s hours and gazing in their plate glass window before I even knew I was walking. Focus.

“Mr. Metcalfe?” I called out. No answer. I maneuvered around the counter. The wheels on the receptionist’s chair were locked, and I tripped when it didn’t move as I brushed past. Falling against the door, I tried to cover my klutziness by turning my thump into a knock. “Mr. Metcalfe?”

Still no answer, so I opened the door. A man in his early fifties sat behind a desk in a suit and tie, minus the jacket, which was hung on a coat rack. A white bread sandwich and a soda were the only occupants of the desk—no lines of cocaine, no secretary (or client) with knees in the air, no jade statue. That’s why the intensity of his reaction surprised me.

“What the hell are you doing here?” His pale lips set in a line, and one hand gripped his soda as if he were about to throw it at me. The other hand crept beneath his desk.

I opened the door far enough to be sure he could see my hands, without actually entering the room. “I’m sorry,” I said, “but the front door was open. I was hoping for a few moments of your time.”

“I’ve got more work than I can handle, and I’m not taking any more clients at the moment,” he said, “so you’ll have to leave.”

I tried my best subtext-less, open smile. “I’m not here to hire you, Mr. Metcalfe. I’m here about a former client, Jerome Adams. I work for his latest attorney, Roger Weber. I was wondering if I could ask you a few questions.”

“If you are working for Mr. Adams, I’ll need a release from him to speak with you,” he said, hand still hidden beneath the desk. I wasn’t about to reach in my purse for a business card.

“Of course,” I said. “Nothing confidential without a release. But in the meantime, I just stopped by the clerk’s office, and—“

“I told you, I have nothing to say to you—confidential or otherwise—without a release. Please shut the door behind you.”

I nodded and backed away, pressing the door shut noiselessly, as if I were afraid of waking someone. Passing through the reception area, I noticed the computer appeared to be off rather than just sleeping, and the surge strip at the edge of the desk wasn’t lit up. There was nothing personal either, no garments or photos or coffee cups. Nothing but office supplies. I shut the front door loudly enough to be sure Metcalfe had heard it, then went to the bakery next door.

The soothing smell of starches assaulted me, taking the edge off my caffeine and crazy guy nerves. A young man stood behind the counter, clean enough to take my money but hopefully not involved in the actual baking. Although I guess 400°F would be enough to kill most contagious things. I ordered a cheddar scone and tried not to salivate while he bagged the pastry with a set of tongs.

He shrugged. “More of a breakfast crowd. We don’t do sandwiches.”

I handed him a five-dollar bill, and his bloodshot eyes looked at me as if to say, Seriously? You’re gonna make me do change today? “You know the guy next door?” I asked, pointing in Metcalfe’s direction.

The cashier shrugged again and said, “He’s a lawyer,” in the same tone of voice he might have used to say, “He’s an asshole.”

“Thanks,” I said, but the entry bell was the only sound to follow me out the door.

I sat in the car and ate my scone (mmm… cheddar) then swept the yellow crumbs from my dark pants. (Yet another reason not to use Cecil on road trips.) I waited an extra fifteen minutes or so, but Metcalfe didn’t come racing out, peer incessantly through his blinds, or receive any visitors. Maybe the guy was just paranoid, but I didn’t trust him. The way he’d completely shut down on me, he was either a very good lawyer or a very bad one. And I was not leaning toward very good.