George Carlin used to do a routine about work habits, how we might get to work on time, but we all piddle around for a while first thing in the morning–look out the window, stare at the art on the wall. After all, he says, “People don’t jump out of bed and vacuum, right?”

Maybe not in real life, but in fiction, it’s often best to just jump right in. In the rough draft of Braving the Boneyard, I had Sydney hanging out in the back of class, making her usual smart-aleck observations. Going into revisions, my developmental editor rightly pointed out that it was best to start where things get real, to start the book with the action. But I know many of you (including me) have a soft spot for Sydney’s snark, so here is the original, unedited version of the opening scene of the book for your reading pleasure. 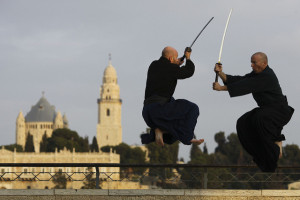 I was in a room full of men, none looking older than forty-five, with just two other women. We were loosely arranged in three rows. The front row was made up of men in their twenties, wearing matching bad-ass black T-shirts and roomy pants. A blonde woman with a ponytail stood rigidly in the second row, also dressed in black. Her hands were constantly clenched, and she swayed infinitesimally from foot to foot, frustrated at her exclusion from the front. A single, thick man stood between me and the other woman in the third row. Her brown, curly hair was pulled back, and a white shirt with a Swoosh set off the kind of tan complexion that’s coming from your genes rather than the sun when November rolls around. The sneakers peeking from beneath the hem of her navy track pants gleamed. Something about her, maybe the way she held herself or stood at attention, made me think she was a cop.

I wore baggy, gray sweats and a green T-shirt with a dinosaur. My sneakers may have been bought during the first Bush administration, but served the purpose of concealing my holey socks from the rest of the class. Lying low in the back, praying no one would notice me, I was reminded of freshman Phys Ed class. Sophomore year was different. That’s the year I broke Becky Crowe’s nose, just before my parents decided it would be best if I went to live somewhere else. I remembered her squeal and I remembered the blood, but I couldn’t for the life of me remember why I’d hit Becky. Don’t get me wrong—she was always a bitch—but I couldn’t remember the trigger…

“Hell, no!” I yelled, channeling a Marine boot camp movie. I stopped myself right before adding the sir.

There were chuckles around me, but not from the front of the room. Especially not from Daniel, our instructor’s right-hand man. I think they had a word for his position—the gunners who actually came to the regular martial arts classes and not just Wednesday’s self defense class—but to me he was just the guy who took over when our Sensei had to leave the room.

I shuffled to the front like a ten-year-old to a salad bar (a real salad bar, without chocolate pudding).

I’d lived in fear of these moments, ever since I’d bowed to a friend’s pressure and started coming to class three weeks ago. The Sensei never made me do anything until we’d broken out into smaller groups, easing me in. Daniel, on the other hand, was a wild card.

Damn you, Glenn. Glenn being the pressuring friend in question. I’d told him there’s a reason martial arts expertise wasn’t included on the Florida private investigator’s licensing exam. He’d said someone with my demonstrated skills at pissing people off needed to be prepared for the moment I pushed someone too far. Okay—he may have used the plural moments, and pointed out a few occasions when that had already occurred. Eventually, I agreed.

Some of the younger men were still a blur to me, but Langley was closer to my age. He had a real world haircut (not a military wannabe) and seemed like a nice enough guy. Wallace was the blonde woman who, in my opinion, needed to reduce her caffeine intake. Langley pantomimed slowly approaching Wallace from behind and putting her in a chokehold. Wallace pantomimed stomping Langley’s foot, then twisting away as she drove an elbow into his chest.

Wallace gave her shoulders a roll and hopped on the balls of her feet a few times. She stopped moving before Langley approached, but only just, and her body still seemed to vibrate. This time Langley grabbed her more forcefully, but you could tell he was holding back. Wallace had no such compunctions. She stomped his foot as if it were a foot-long cockroach, then let out an Amazonian scream. Fortunately, after the foot stomp Langley knew she was playing for keeps, so he leaned away as Wallace’s elbow struck his chest. His breath still flew out in an audible grunt, while Wallace turned to face him and looked ready to do more damage.

Langley nodded, but didn’t speak, still leaning forward, trying not to put a hand to his chest.

“Okay, we’ll give you a little break,” Daniel said. “Patterson, why don’t you step up here with Brennan.”

I didn’t have a face to go with that name, but someone standing with the other young men in Testosterone Row bounced forward with all the energy Wallace had shown. Great. Maybe he was her little brother.

“You ever think you shouldn’t look so excited about attacking a woman?” I asked, as I passed by Patterson.

“You ever think you should keep your mouth shut in the dojo?” he responded.

Was it a dojo? I’d never thought of it that way. To me, it was the big empty office with floor mats in the corner, next to the Indian travel agent that was probably a front for something else. But I guess if you came here several times a week, month after month after month, it was a dojo. So I probably shouldn’t have stuck my tongue out at Patterson. If the Petite Poobah Daniel could have seen my face, I wouldn’t have. But he couldn’t, so I did.

Daniel moved around for a better position and told us to go ahead. We walked through it first, with slow, exaggerated movements. Patterson’s arm crooked around my throat, barely touching my collarbone. I lifted my foot and brought it down on his, like a drum major leading a parade. Except if I had one of those staffs, I wouldn’t need to stomp somebody’s feet.

“More heel, less toe,” Daniel said. “You really want to get some force into it.”

I lifted my foot again, brought it down, and left it there. Then I moved my arm back toward Patterson’s chest—

This time, I made a fist before taking my elbow toward his torso. He was taller than me by a lot, but my elbow curved up as it went back so it met his body near his low sternum. His arm loosened, and I twisted and stepped forward, careful not to trip over my own feet.

Patterson stepped away. I stood with my back to him and tried to pretend like I didn’t know what was coming, but the anticipation sensitized me to sound of his fancy sneakers on the mat, the slightly musky smell of his deodorant, and, of course, to his touch. It was too much for my brain, and when his arm finally swung around me—much more closely this time—I giggled.

“You think this is funny, Brennan?” Patterson asked. His breath stirred my hair, and I laughed harder.

Patterson’s arm tightened and for a moment I thought he would choke me.

I nodded, shook my head and rolled my shoulders, much like Wallace had, to clear my mind. I was just starting to relax when Patterson slammed into me. His choking arm bent my body backward and nearly lifted my feet off the ground. I grabbed his arm with my hands, but there was no give in it.

“Give me your purse,” he said.

My hands slid down his arm, looking for a weakness. His other arm clamped his wrist, so I was effectively fighting both his arms. My heartbeat filled my ears, louder and faster, until I could barely make out Daniel’s words.

But I didn’t. I didn’t know what to do. I couldn’t breathe. My peripheral vision was swallowed by a field of gray that made its way toward the center of my eye, clouding the world as it moved. My legs grew numb, weak. Daniel’s voice was far away …

Time and space shifted and my feet did leave the ground this time, coming back down to rest awkwardly on someone else’s, someone with intense body odor. A hand grabbed my hair at the base of my skull and yanked my head back. His voice pushed its way in, through my ear, on to the nerves and the brain.

Are you a real redhead? I hear there’s only one way to tell for sure.

His arms loosened enough for me to step solidly onto the floor and put a few inches between us. I tilted my head forward and slammed it back hard, feeling teeth and chin hit my skull. The arms released me, but as I stumbled sideways something struck my face—elbow or hand, I wasn’t sure—spinning me the rest of the way around to face my attacker. I kicked hard, putting everything I had into it. He stopped coming, and my legs gave way, dumping me to the floor, where I sat, shaking.