I don’t know about you, but my week has seen a fair number of distractions. Many, like the current political situation in—oh, let’s just say everywhere—are of immense scope and importance, and yet have no immediate and discernible direct effect on me on any given day. (Is that enough qualifiers? Sorry—lawyer flashback.) Others, like the beetley roach (that’s what I call the smaller non-palmetto bug roaches because it decreases my likelihood of shrieking) making his sporadic journey around the room right now, have a small scope and very little Importance, but a direct effect on me. (And once on our poor dog Fred, when a beetley roach landed on my book while I was reading in bed, and I threw the book, and it slid from the bed onto Fred’s head; thankfully it was a paperback.) For good or ill, lately I’m finding it’s actually easier to block out The Big Things, or at least compartmentalize them into blocks of existential angst, than it is to ignore the smaller things. 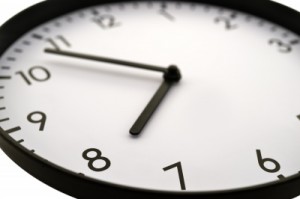 My best writing time is in the morning, and I was inspired by a recent Self Publishing Podcast on writing efficiency to get a little more ruthless about guarding that time. For The Big Things, I’ve stopped listening to NPR news in the morning while doing the pre-coffee shuffle. I don’t need all those stories bouncing around in my brain right before I focus on mine. (Or actually, my protagonist Sydney Brennan’s story.) For the smaller things, I don’t turn the internet on until I’ve made my daily word count, or occasionally when I break for lunch if there’s something that really needs to be addressed. Of course, how do I know something needs to be addressed? I still check email on my phone when I get up (and fairly compulsively thereafter) before I start writing. And maybe once or twice during the course of the morning if I get up to stretch or get some water. ARGH! I rationalize this behavior with the time zone warp. I live in Hawaii, six hours behind the eastern U.S. time zone. That means my inbox is full when I wake up, and most people are hitting the send button hard until around 8 or 9 am my time. If there is something important in that flurry, something that needs my input to move forward to the next step, I have to respond by mid-morning or I’ve lost a day. But I’m getting better about prioritizing. 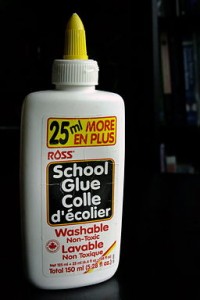 Bottle of glue by Mk2010 on wikimedia commons

That brings us to my big win for the week. This morning there was a contract/invoice in my inbox for a magazine article I’ve already written. It takes so long to get paid, I always make paperwork a priority. So I turned the internet on, downloaded the contract, and started to read it. So I could sign it, so I could scan it, so I could email it back ASAP. It doesn’t sound like much, but because of various wonky technology issues (speaking of inefficiency) the whole thing would take at least half an hour, possibly more. But then (let me try again, because this was an epiphany moment) BUT THEN I thought about prime writing time, about losing my momentum before it started, and about Urgency versus Importance (I’ve been reading Steven Pressfield’s The War of Art this week, and that distinction alone is worth reading the book). The contract was for an article I’ve already written that won’t appear until the Nov/Dec 2014 issue, which means I won’t get paid until next year. One day is not going to make a difference. Cue angels and beams of light. 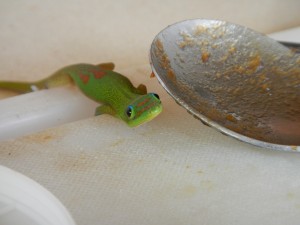 So I wrote instead. And despite my dog pretending the need to go out multiple times, and the cat mewling with a bird on the front doorstep (as he has every day this week, necessitating two rescues while writing yesterday alone), despite geckos falling from the ceiling while desperately trying to kill each other or have sex, and despite my husband stopping by for lunch (just lunch, people—mind out of the gutter!), I hit my word count. And I hit it the earliest I have done all week. Every day, the distractions get less distracting, sitting in front of the blinking cursor gets less scary, and the writing gets easier. And, oh yeah, it gets funner too. (Sorry, although grammatically incorrect, the amount of fun is worth breaking a rule.)