It’s rough out there, folks. At least, I think it is. 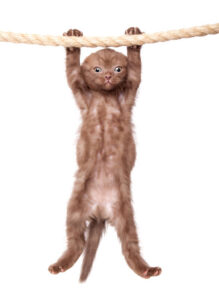 But I see it in my Inbox and on social media and podcasts—many of us are just hanging on to the non-committed side of the mental health line by the skin of our skinless teeth.

[Random digression: I did not know skin of my teeth is a phrase of Biblical origin. Random Digression P.S.: how many of you thought I was going to rant about about pathetic mental health care safety nets in the U.S.?]

I know I am incredibly lucky to have numerous advantages during this unprecedented time. Advantages here referring to factors that mean my life has fewer complications than it might otherwise have. I am a childless, white woman happily married to a white man who is still gainfully employed, living in a home that is humble, hot, and humid, but ours.

These are just the low-hanging fruits of our abundance. And yet… I’m still feeling it in my toofie skin.

So consider this my reminder, to whoever needs to hear it: if your teeth are feeling flayed, you’re not alone. And you’re not abnormal.

Which isn’t to say you and I aren’t also crazy, but I’ll leave the diagnosis of unrelated conditions to the experts. 😜

This grating sensation between what my brain wants and what the universe is manifests in myriad ways for me, not all of which are immediately recognizable. One that is clear: I’m finding it difficult to write. Difficult to settle. Difficult to block out all the things I can only affect in a limited way, if at all, whether it’s Covid drama or political craziness or even our poor dog Fred’s discomfort.

This morning alone, the number of times I rearranged furniture or found myself googling various dog medications… it’s a wonder I made time to hit the loo.

Actually, excuse me for a moment while I hit the loo.

So since I don’t have the mental capacity to share anything elaborately entertaining, I thought instead I’d share something slightly bittersweet that made me smile this week. In the hopes that it will do the same for you.

Longtime blog readers know we lost two of our three dogs in the last eighteen months (Fabulous Fritz in 2019, and Travis the Dingbat Dog recently during the Covid times). And our remaining dog Fred has serious health issues we’re struggling to manage now.

The beast that is our Ninja Kitty was carried around as a kitten by yet another now-dead, big stray dog (ah, Murphy, the Lovable Galoot). Having “broken” and made peace with every anti-cat canine since (though it was damn close to a different kind of broken with Travis several times), the diminishment of his pack is definitely hitting Ninja hard.

Note: it is his pack because he is the non-human alpha. 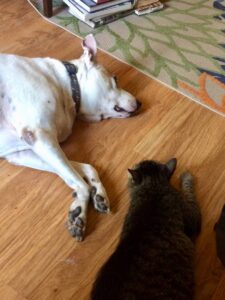 In recent months, Ninja has been alternating between acting out (which is just a nice way to say, trying to piss us off) and being unusually affectionate. Lots of lap time. Lying on my feet while I’m standing. (Did I mention the hot and humid house?) And he spends a lot of time around Fred.

Eating when his dog friend eats. Lying next to him. Touching the 80-lb dog with his paw until Fred can’t take it anymore and rolls over.

Ninja even accompanies us on Fred’s “walks,” which are really slow meanders halfway up the driveway and back.

Well, we’re slow. Ninja swings between stalking us and doing strafing runs, thundering past like a mini-puma as fast (and close) as he can.

A few evenings ago, Fred and Ninja were hanging out in the fenced yard together after dinner, and my Spidey (aka The Pets are Up to Something) Sense started tingling.

I stepped outside and saw Fred standing, sniffing at the ground between a relaxed, Sphinx-posing Ninja’s paws.

Ninja had brought his dog buddy a baby rat… so they could play with it together? I don’t know.

Fred was interested, but not aggressive. And when I picked the little creature up by its tail, Ninja didn’t protest either. Nor did he try to follow while I carried the wriggler out of the yard. Instead, Ninja followed Fred inside and lay on the rug next to him.

I probably imagined his sigh. Aww…

And so I send you on your weekend way with that image (sorry I don’t actually have the image) and some homework.

Find a little something that lets you smile, even if just for a moment, and even if it is bittersweet. A hui hou! 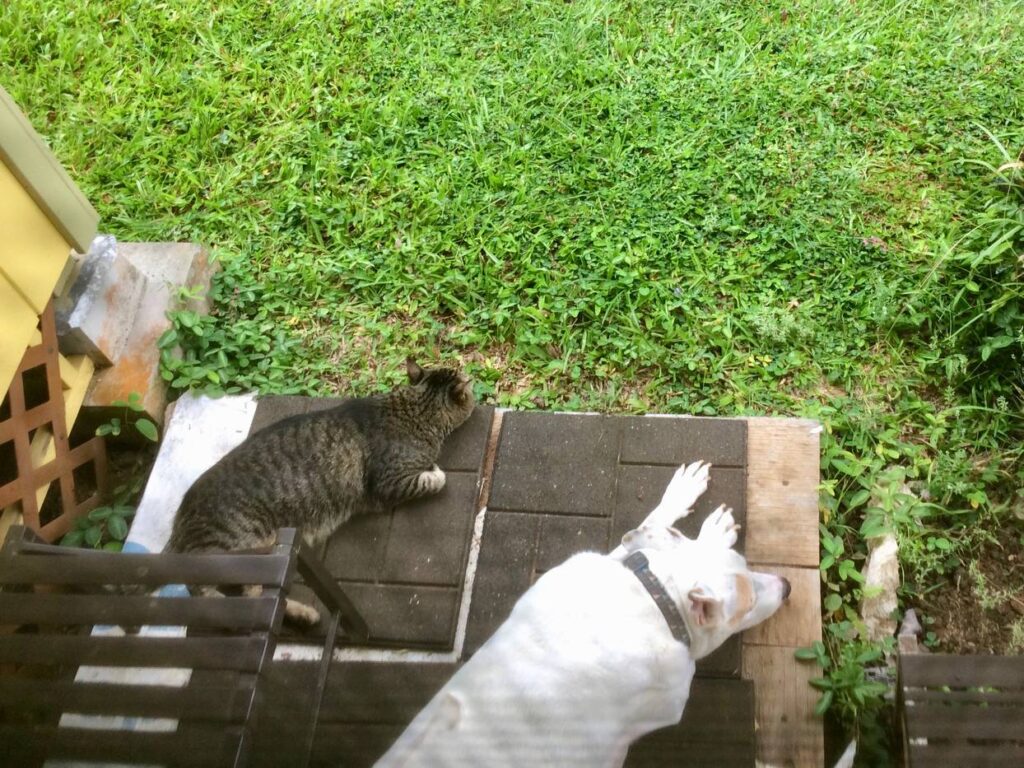