Sometime over the next month, I’ll post about where things are now and where they’re headed, with Sydney and my writing generally. In the meantime, I mentioned over the weekend to my Newsletter folks that I’m hard at work on the fourth Sydney Brennan book. In fact, I should have a rough draft finished within a week (emphasis on rough—there are a lot of yellow comments with things like “IS THIS RIGHT?,” “CHECK THIS,” or “FILL IN”). If you’ve read the most recent Sydney Brennan novel, The Perils of Panacea, the current novella takes place a short time after that book concludes, and in Central Florida rather than Tallahassee. At least, it does now. But it didn’t exactly start out that way.

In case you haven’t guessed, four books into this indie publishing adventure, I’m still making it up as I go along. That goes not just for the publishing part, but also for my writing process. After finishing Panacea, I knew the story I needed to tell next chronologically, even if it wasn’t necessarily the one I wanted to tell next. Originally, I set that story in New Orleans. I lived there for several years, and I go back to visit regularly. It gave me my husband and the wonderful, extended family I’m now so lucky to call my own. Why wouldn’t I want to set the story in a city I love? I came up with a few solid supporting characters, and some fictitious but plausible locations. I even had a good reason for Sydney to be there. And yet, the story didn’t quite work. I wasn’t sure why. I kept pushing forward anyway, but about halfway through, I finally admitted it. The story didn’t belong in New Orleans. 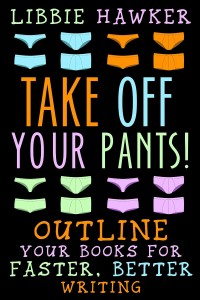 This was around the time Panacea was launching, so I decided to let my brain settle while I was in Florida, to come back and look at the project with fresh eyes. I also read Libbie Hawker’s book, Take Off Your Pants. Although I read it in Florida on vacation in the spring—some might say during my Spring Break—it’s not about public nudity, but rather about a particular step-by-step process for outlining your books. I’m definitely on the Pantsing (speaking of making it up as you go along) end of the writing spectrum by nature, but I’m aware that it’s generally not the most productive way to write. I got a lot out of the book. What Hawker says about how we relate to story and story structure make sense, and her questions exploring the character motivations and themes of your work are helpful. When I returned to Hawaii, I sat down with her book and my notepad and my vague story notions. I did fine until I got to the portion where you actually outline the plot, albeit in very general terms. That’s when I nearly scratched my eyes out. I tried—I really did—but when the dog moved to other room because it was safer there, I decided it was time to stop.

I was starting to feel a little like that dog in the cartoon, trying to find a wily story instead of a fox, but I tried to keep the story principles in mind while going back to my meandering way. This time, I set the story in Central Florida. I threw all the supporting characters out the window, but there were some interactions between the two main characters that still felt right, so I kept them. Unfortunately, I also kept a bunch of other things as well, story preconceptions, but I didn’t know it. I thought I’d made a fresh start, but I hadn’t. So I kept plugging away, but the story still wasn’t working. I dumped all but the first two chapters—again—and made a big structural change, which helped, but didn’t totally fix it.

Finally I took a step away from the screen and asked myself: Why is Darth Vader robbing a bakery? (Fake scenario—there may be Sith in Florida, but not in my Sydney Brennan mysteries.) Answer: because Bilbo Baggins (sorry–there’s not really a Floridian Middle Earth) absolutely must have chocolate cake (totally true, but only because everyone needs chocolate cake). But why? A tiny little voice in my head, just waiting to get yelled at, said, because that’s what you did the last time. That’s when I realized, OMG, I Am the Master of This Universe. I can do anything, change anything. Make Darth Vader a Hare Krishna and Bilbo an Ice Cream Man Serial Killer. (Sorry—I’m reading Stephen King’s Mr. Mercedes now, and it may have leaked in a little.) Well, I can’t quite do anything. I can do anything so long as it is consistent for the characters. The story, and the plot, start with and arise from the characters. That’s where I kept losing my way; I was forcing the plot because I didn’t know the characters. It’s the kind of thing you know intellectually, but occasionally need delivered in a dope slap (with the dope slap here being so much wasted time, so many wasted words). So I took some time to get to know the characters and went from there. I still find vestigial plot points, tucked away in my brain like a corn kernel in teeth. But so long as I stick to the characters, I’ll get there.