That’s how I introduced myself to one of the panelists at the writers’ conference I attended last month. Not that I didn’t appreciate the writing and marketing wisdom I’d gleaned from her interviews and articles over the years. But I was jet-lagged, and sleep-deprived, and super-saturated with everything I’d learned at the conference to that point. So what I could remember and articulate was, “I love your dogs.”

I haven’t shared a pack update in a while because they’ve had some challenges, and I try not share things that might bring you down. There’s enough of that on the news every day. But the pack is where a lot of my energy has been going for several months, and since we’re guardedly optimistic that things are looking up, here goes… 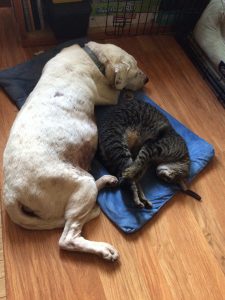 Among their many health issues, our strays Fritz and Travis (aka Mr. Piddles) were infested with heartworms when they arrived on our doorstep three years ago, and Fritz (the pit bull mix) barely survived the treatment. Still, except for regular skin cancer removals, he’d been doing reasonably well until this year. For some reason Fritz’s health has gone downhill precipitously in 2018.

Initially we chalked it up to age, not that we know how old he is—seven? Seventeen? Seventy-four? Then during the lava drama (the nearby active flow from May through August), Fritz had more and more difficulty with walks. But so did we, breathing the lousy air. Of course, he’d also gotten weirdly, selectively fat—thankfully we did not—and he was losing hair. Again, thankfully we’re not balding, either, so we probably couldn’t blame Fritz’s patchiness on the bad air. And he was thirsty and panting all the time.

When the vet stalled out on the he’s getting old explanation, we went down a research rabbit hole and eventually emerged at… Cushing’s Disease. Seriously. Because it’s not enough to get canine diseases. Our dogs have to be special and get human diseases as well.

If you’re not familiar with Cushing’s, the body produces too much cortisol, often as a result of pituitary or adrenal gland tumors. Thanks to muscle wasting, poor Fritz looks simultaneously fat and skinny, with a pot belly and hollow spots on his skull that break your heart. We suspect he was pretty far along by the time we got a probable diagnosis. (It’s not one of those things where you can pee on a stick and say yes or no.) He could barely walk and had to be helped up and down our front steps to use the bathroom. 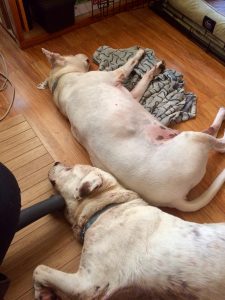 The typical medications for canine Cushing’s are pretty intense and require constant monitoring to ensure—this is only slightly hyperbolic—you don’t completely dissolve the adrenal gland and trigger Addison’s disease instead. And they’re expensive. Plus add in the Hawaii complication factor (most monitoring tests have to be sent off-island, for example). So after another research rabbit hole, with Fritz’s medical history we decided to focus on quality of life by using a combination of supplements in a protocol developed by a veterinary school.

What does that mean? I wrangle delivery schedules, juggling multiple supplements from multiple sources, sometimes sent to multiple addresses (because it’s Hawaii). My husband gives Fritz one particular pill every morning an hour before we “officially” get up, then returns to bed. (He’s the martyr because he—husband, not dog—can go back to sleep). Fritz is fed four-ish times a day (by now I’m employing all the Hobbit terms for meals), usually commercial dog food but with toppings like rice and cottage cheese and pumpkin and tuna. (Don’t ask about the state of our kitchen floor.) We’ve purchased more cottage cheese in the past two months than in the previous two years, and I didn’t get to eat any of it!

We’ve tried several varieties, often because of supply issues (yay, Hawaii), which means all three dogs have tried several varieties. That’s right, dog owners, you know where I’m headed… OMG, the canine flatulence in our house violates Clean Air standards! And my husband and I can tell you more about our dogs’ excrement than any human should ever know. Which dog, how many times, whether it looked “right”… It’s not just a matter of dog health; it’s also a matter of human hygiene. You may recall Travis, the dingbat dog, and his total inability to anticipate his body’s outdoor needs. In case you’re wondering, that is not helped by changing his dog food. 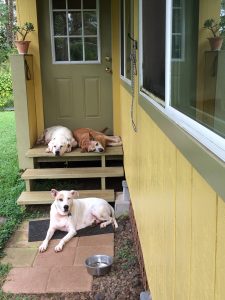 But on the bright side, Fritz recently finished his first full month of getting all the supplements and dietary changes online, and he’s doing better. (The cooler weather helps, too.) He rarely wakes us in the middle of the night to go pee. He still has good days and bad days, but he almost always makes it (carefully) up the steps by himself. He’s more engaged in general, and he can do a slow but steady dog walk without collapsing or even stumbling. We try to push him a little farther every day. He’s even started doing the infamous Three-Legged Pee, followed by occasionally pawing at the ground. Fancy-schmancy!

And of course, he has enough energy to follow me to the kitchen all day. Just in case. Is that second breakfast, human? Elevenses? Afternoon tea? The attention can be wearing, as can the constant canine monitoring. Did I mention Ninja Kitty’s penchant for causing trouble (biting dogs, jumping onto counters and out of bedroom windows onto our heads, etc.) when he feels like he’s being ignored? But all in all, I’d have to say that compared to a few months ago the entire household is enjoying a better quality of life.