I know, I know. No blog post last week. Let the beatings begin. 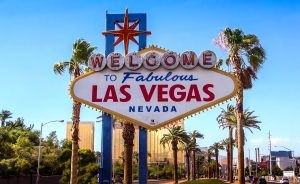 But I had a good excuse, I swear. I was off island in a hotel with truly horrendous Wi-Fi in… Wait for it… LAS VEGAS, BABY! Sin City! City of Lost Wages! Glitter Gulch! (I think that last one is just downtown, but I love the alliteration.) You get the idea.

Okay, admittedly the crappy Wi-Fi didn’t matter so far as writing a blog post goes because I never had a free moment. In fact, I never got more than four hours of sleep in a night and usually less. And for the record, I never touched a single slot machine except once when I walked into one trying to navigate the crush to a restroom. (David Sedaris fans, I suspect some casino goers were wearing Stadium Pals.)

So why was I in Vegas, baby? (Sorry, it’s really hard not to add the baby every time I say the V word.) I went to Las Vegas for the most amazing conference. Seriously, it blew my mind. It was aimed at indie publishers trying to figure out how to make a real, consistent living spinning their stories. In other words, it was much more focused on mindset and marketing than on craft.

That’s not to say there was no talk about how to up our writing games. Many of us chatted about it in the evenings or between panels. And then there was my truly surreal experience… an intersection of the world in my head and the world I inhabit. (Of course such an experience would occur in a desert.)

20Books was a big conference with about 750 attendees, three rooms, and multiple presentations going on at any given time. I almost didn’t stick around for writer Dean Wesley Smith’s lecture in the main hall because it was being recorded and I knew I could watch it later. I’m so glad I did.

Dean Wesley Smith speaking at the 2018 20Books Las Vegas conference—the only picture I took all week!

DWS strode to center stage in a leather jacket and Western hat, which he humbly acknowledged as his version of branding. However, he went on, it was too hot on stage for branding. So he removed his hat and jacket, and suddenly Harlan appeared on stage. I am not kidding you, it almost took my breath away.

[For those of you who haven’t read Dead Hollow (and if you haven’t, why haven’t you?), Harlan is my favorite character from the supernatural thriller series. He becomes a mentor to the protagonist, Adam Rutledge, in the first book. I jokingly described him as Adam’s Obi-Wan.]

Where was I? Oh yeah, DWS spoke about Writing into the Dark, his method of writing a single, complete and relatively clean draft. Or, as I experienced it, Harlan appeared on stage and began describing my natural writing process to a T. I’m not kidding, including a looping thing that some writers will chastise you for, saying you’re not supposed to edit while writing. (It’s not actually editing, because you’re still in the creative mindset, as Harlan/DWS so eloquently articulated.) So Harlan/Obi-wan, my ultimate mentor figure, told me personally (and 749 other people) that the way I write is okay. In fact, it’s beyond okay. It’s damn skippy. (Not actually his words, but I did feel damn skippy.) How cool is that?

So that’s what I was doing last week. Getting affirmation from on high, and learning lots of other stuff, too. Hanging with my heroes and my peeps. Running on adrenaline and coffee and not much else. (Travel Note: Las Vegas is not the most vegetarian-friendly place, especially if you’re in a casino not on the Strip.) I may share more as I integrate some of the things I learned, but for now I’ll leave you with my surreal serendipity and return to the task that’s occupied most of my time this week — hydrating.

Perhaps I’ve been been ruined by East Hawaii, but how people can live in humidity below 75% is beyond me! 😜