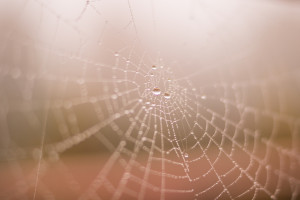 It’s a good thing it’s hard to fall asleep on a yoga ball chair. Yes, it helps your productivity to actually be awake at your desk. (Although I have heard a well-timed nap can do wonders, unless you have three dogs and a cat for whom human napping is anathema.) But right now, staying awake at my desk is a matter of life and death. The day I fall asleep may be the day they eat me. Following is a rough reconstruction of the Arachnopocalypse timeline.

Day One: Oh, that little bitty web at the ceiling is too hard to reach, and maybe they’ll help keep the bum-biting fire ants away.

Day Five: Another strand or two… but I’m helping to perpetuate a natural ecosystem, to maintain creepy-crawly balance in our house, right?

Day Five [night, kitchen]: Jesus God, why can’t the spiders eat that palmetto bug before it carries us off in the night? Heebie-jeebies.

Day Seven: There’s more than one spider in residence. I should do something about that.

Day Eleven: No, I draw the line at engulfing my Season Snow Globes in silk. [Section cleared]

Day Twelve: What the hell are these spiky little things in their webs that look like they’ve fallen from a spider tree? I should really do something about that.

Day Fifteen: What happened to the spiky ball next to the router? Even if it hatched, shouldn’t there be babies or scraps or something? And where’s Dog #3?

Day Eighteen: There are a kajillion (yes, I can count that high) baby spiders in the wall of web at the ceiling. Now I really want to know where the first batch went. As well as Dog #1.

Day Twenty-Three: I draw a second line at connecting my desk to my bookshelf. Sorry, Charlie/Charlotte.

Day Twenty-Nine: The webs are no longer pretty in any light. They’ve progressed to the why-is-there-dryer-lint-next-to-the-ceiling-even-though-we-don’t-own-a-dryer stage.

Day Thirty-Seven: The curtains, lamp, and bookcase are now all connected to each other and the wall in an elaborate arachnid system with multiple failsafes. If I open the curtain, will the south end of the house collapse? [Shift desk farther from their lair] 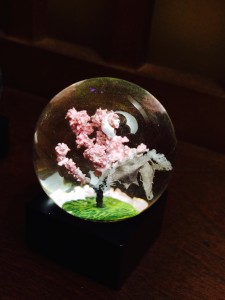 Day Forty-Two: Seven—no eight—mama bear spiders, plus a bunch of teens. I’m afraid to reach under the lamp shade, but if I leave the lamp on all night, it’ll just attract more food for them.

Day Forty-Nine: In addition to the four fresh spider pods by the ceiling, they have now attached pods to Spring. Not cool.

Day Fifty-Three: The matriarch is now so big I can see her mandibles moving from my desk. Maybe I’ll put the dogs (dog?) out where it’s safe and work at the library today.

[No dogs were harmed in the Re-creation of this Arachnopocalypse. Spider web by Skitter Photo from stocksnap.io; spikes on snow globe by me]