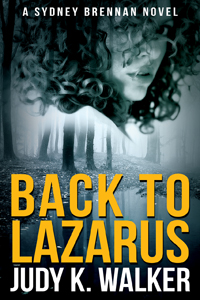 Back to Lazarus is now live on Amazon for Kindle. Yay! (In my best Dancing Kermit voice.) I have to say, the technology hasn’t been as painful as I feared it would be.

The novel was originally written in Microsoft Word, but when I decided to self-publish, I imported it into Scrivener. I cannot say enough good things about Scrivener, although I did have a few heart-stopping moments when I was afraid my Bad Tech Vibes had managed to overcome even its resilient functionality. The conversion to .mobi wasn’t awful either. I had Ed Ditto’s How to Format Your Novel by my side, so that helped. There was only one little thing I could never quite get the way I wanted it, but I decided to let it slide. Next time…

I moved up the timeframe on release a bit because I wanted to take part in Digital Book Day on July 14, 2014. This event is the brainchild of CJ Lyons, who in light of recent publishing kerfufflery, describes it as “A day to celebrate readers, stories, and the authors who create them.” How can you resist? Oh, did I mention all the participating books will be free? I’m making my list now.