I’m about to wrap up the rough draft of a novella, so of course I’m writing a blog entry instead. But, as I like to preface many of the things I tell my closest friends, “This [blog entry] is not a total non sequitur.” (Which implies that it is at least a partial one.) I was prompted to try a novella that follows my private investigator Sydney Brennan by two things: resistance in writing the second Sydney Brennan novel, and the Black Orchid novella award, a contest put on by the Wolfe Pack and Alfred Hitchcock Mystery Magazine for unpublished novellas that fall within the loosely defined tradition of Rex Stout’s Nero Wolfe series. 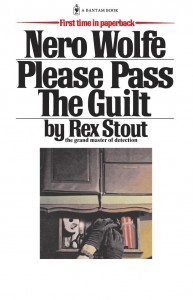 It sounded like fun, but things came up. I missed the deadline, overshot the word count, and let myself go outside the bounds of the original project. It was a great writing prompt, though, and it made me pick up an old Nero Wolfe novel as a refresher. Nothing beats the feeling of picking up a book at the library that was printed the year you were born, looking at the heavy, unevenly bound paper and a sequence of Date Due slips glued and taped inside going back decades, and wondering about the people who read it before you. (Unless it’s a book with explicit sex scenes. Then it’s best not to think about it.) It’s one of the physical elements I miss when I read ebooks, the sense that a book holds layers of reader experiences, strata of human engagement with the text. At the risk of sounding woo-woo, I like to think of it as “book chi.”

I don’t think all books get book chi. Working at a library of rare books in college, I’d occasionally get lost staring at the copy of the Declaration of Independence through its glass. We always whispered, even if (as was typical) there was no one else around. Walking up the metal spiral staircase gave me the goosebumpy feeling of being surrounded by arcana, yet I don’t remember noticing book chi when I was cataloging new acquisitions. Maybe it’s because those books were more collected than read. The best places to find book chi are used bookstores and libraries, where often the evidence that someone was there before you goes beyond a warm and fuzzy feeling. Sometimes people have written in old books, tiny penciled notes in the margin or underlining. I was raised with a reverence for books, so annotations make me cringe. I try to forgive pencil, especially if someone is correcting a typo. (I understand the compulsion.) I’m also not a fan of unidentified food or beverage stains. On the bright side, my husband once found a $100 bill in a used book on Buddhism; hopefully the previous owner was unattached to his bookmark. But I wonder if we changed the way we interact with books even before ebooks hit the scene. It’s pretty unusual to find any thing other than a discarded hold slip in a library book that came out in the last decade. Where are the lottery tickets, the boring play programs, the grocery lists? Where are all the reader artifacts? 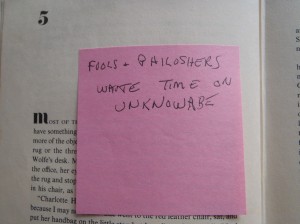 Like my friends when I’ve yet to link the mantis shrimp story with the iced mocha that prompted it, I can tell you’re still thinking book chi was a total non sequitur from my novella. Well, not total. The book I read to refresh my Nero Wolfe-itude was Rex Stout’s, “Please Pass the Guilt.” In addition to being a fun read, heavy with book chi, 30 pages into it I found the artifact you see in the photo. How can you not speculate about the identity of the person who left this pink Post-It paraphrase? (The handwriting reminded me a little bit of my father’s notes, except that my father was an excellent speller.) The original Nero Wolfe quote that inspired it appeared on page 4: “Only philosophers and fools waste time on the unknowable. I am neither.”