A couple of weeks ago, I was driving toward downtown Hilo, glancing at Hilo Bay. After checking the traffic, I merged automatically into the right lane as I’ve done during months (years?) of road work. Only to feel like a doofus.

There was no merge.

Holy crap! The road suddenly felt so expansive, minus the cones and construction detritus in the middle two lanes, that I felt like meandering from lane to lane just because I could.

I didn’t, because—most of the time—I’m not actually a doofus. 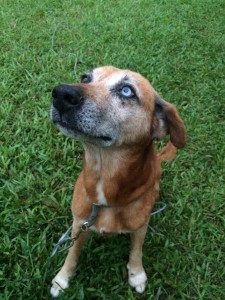 On a slightly grander scale, two weeks ago we were a one-dog, one-cat household. Now my husband and I regularly—especially at walking and feeding time—look at each other and ask, how did we get three dogs? As if they snuck into our house and hid behind the furniture to give us time to get used to the idea.

Let me assure you, these dogs are constitutionally incapable of sneaking.

First was Travis (short for Travis McGee), a poi dog so emaciated and malnourished my husband carried him to our house and the vet doubted he would survive. Then a few days later, Fritz arrived (I know—bad idea when Dog #1 is Fred, but he is so a Fritz), a pit bull mix not nearly as malnourished but still looking for food. (And love—dude is a serious love muffin. But looking with only one eye; he has a cataract in the other.)

Both dogs had been criminally (if I had my way) neglected and were considerate enough to host just about every worm known to dog, including heartworms. We now have a calendar full of medical notations and a framework for dog treatments over the rest of the year, including about six weeks of keeping the dogs quiet. (So far, Travis is not quiet in any sense of the word; he talks to his itches and ouches with a variety of yowls.)

And of course, at least temporarily, our lives have radically changed.

Temporarily, meaning, until we get used to it. 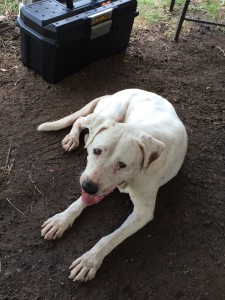 Maybe I’ve been living in Puna too long, but I feel like there’s some sort of change cycle in the air. Even The Muse is mixing things up. I’m working on the fifth Sydney Brennan book now, trying not to panic as life (Yosemite upgrade, geckos on my desk, oh yeah—Ninja Kitty bopping the new dogs…) distracts me and my developmental editor deadline fast approaches. But when I sit at my laptop, things are not happening the way they normally do

If I had one of those Men in Black zappy things installed on my website to make you forget, I’d totally share in detail because I’d really like to share with somebody. Since I don’t, I’ll be circumspect and not ruin the next book for you.

I’ve confessed before that when it comes to writing, I’m a (by-the-seat-of-my) pantser. (Spellcheck, on the other hand, much like Ninja Kitty, wants me to be a panther.) I start with a very basic idea, and I have maybe a pivotal scene or two in mind that I write toward. I almost always write sequentially—in order, from beginning to end—with the rare moment of cheating by chipping away at one of those pivotal scenes.

For this book (here’s a bit of a teaser, the Scrivener file I’m writing in is called Ralph_novel), I started with a basic idea, but it was slow going, even more so than my usual bear of a beginning. Eventually, I decided I could sit there and stare at the computer (or worse, type “All work and no play…” over and over until I hit my daily word count) or I could zip ahead, write a little bit of a future scene and come back. So I did. Several times, always with non-pivotal scenes.

Finally, one day I had a Driving Epiphany: I was having problems moving forward because I was trying to write the wrong story. 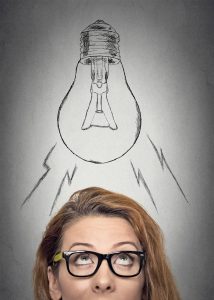 The future scenes that worked were in the right story. See, somehow Stephen King’s boys in the basement (from his book On Writing) had tweaked the original idea until what would have been a small chunk became the focus of the story. Even more importantly, the tone, themes, everything felt different, because the balance of the relationships in the story were turned on their heads. Adding to the cool factor, a later book I’ve had in mind for a while makes so much more sense with the big picture changes to this one.

(By the way, favorite joke in our house lately is by Jon Dore: You know what I just realized? I have never had an epiphany.)

It’s still not easy, though. It’s hard to let go of my old forward-at-any-cost way of writing, to trust this process to get me there when it’s still slow going. Just as it’s not easy to get up early, manage multiple feedings and walks, and keep the peace during dinner doggie integration (our dinner not theirs; we eat and cram old episodes of Dog Whisperer surrounded by our four four-legged friends).

But in the end, it’ll be worth it.