A few weeks ago, I wrote a Magpie Moments post (bits of real life, incorporated into Sydney’s adventures) about the Delta Orlando Resort. This week, I thought I’d write about less luxurious accommodations.

“… I travel a lot, and I always feel funny about using the hotel phone. Like I can feel the last person’s face there.”

Lisa looked at me as if I were wearing my underwear on the outside of my clothes. “It’s no worse than the bed, or—” she almost couldn’t bring herself to finish, “—the toilet.”

“True,” I said. “And, unlike me, Graeme probably never stays in places with dead roaches on the A/C units and hookers smoking on the balcony.”

“That’s disgusting,” Lisa said, setting peppers and an onion to the side, along with a package of some kind of meat.

“Oh, yes. The stories I could tell. But not before dinner.”

Unlike my protagonist Sydney Brennan, I have never been a private investigator. However, I probably have a better appreciation for the less glamorous portions of the job than most people do, especially the road trip.

When I was doing criminal defense work, I spent a fair amount of time on the road with investigators, first as a lowly intern and later as a second chair attorney. Often it was just day trips, but sometimes it was a few days, and once a full two weeks. That one was with someone I barely knew, but thankfully we ended up hitting it off. If he’d had no sense of humor, it would have been a very long two weeks, for both of us.

Of course, anyone who’s ever driven toward a vacation destination and said, Eh, we’ll just stop someplace off the interstate when I get tired, will appreciate that getting decent accommodations can be tricky once you’ve left home.

The more tired you get, the more desperate you get, and it often seems the more limited your options become. What’s that? I hear some of you saying, “Oh, I’m not one of those people. I always reserve ahead.” Remind me to travel with your party, but in a separate car. The fun car.

I’m kidding! In fact, reservations were the norm for investigative trips when I worked for a state agency. Internet review sites were not yet the norm, but some trips were repeated so often by so many people that you knew ahead of time where to stay (and not stay, and eat, and not eat).

After all, a lousy motel is still a lousy motel, whether you book it ahead or unhappily stumble across it. (One boss had a Days Inn-only edict; I challenge you to find a more universally shitty motel chain, and yes, I still have some energy about that one, over ten years later.)

The worst motel I ever almost stayed in was near Huntsville, Alabama.

(Also where I had the worst Chinese food ever; fortunately the investigator and I ate vegetarian, so it was only disappointing rather than hospital-visit-inducing.)

I was still in law school at the time, a fresh-faced summer intern with a death penalty defense nonprofit, thrilled to be on the road with an investigator. She wasn’t just an investigator; she was a cool investigator. Probably a decade or so older than me, she seemed confident and worldly without being old. She dated a musician (who was also on the road at the time), and she shared my appreciation for blues.

I have a vague recollection that something had come up and we’d left New Orleans late, then tried to put as many miles behind us as possible before stopping.

We were exhausted when we pulled over. It must have been around midnight, give or take an hour, the parking lot dim with the coppery light that makes me think of cheap places near the interstate. I’ve already confessed my bias, but I’m pretty sure the motel was a Days Inn. The parking lot was nowhere near full, but the guy at the front desk—working behind what he hoped was bullet-proof glass—told us there were no rooms available with two beds. No problem; we were willing to share (remember, we worked for a nonprofit).

The investigator took a key and we left to check out the room, making our way up the concrete and metal exterior stairs to the second floor. There was indeed a “woman of the night” leaning across the rusty railing, smoking a cigarette. I wondered if she was between clients, and I thought if I were her I probably wouldn’t have trusted that railing with my life. Our room was closer to the stairs than she was. Faster exit in case of fire is a plus, right? Maybe that’s what someone was yelling unintelligbly from behind closed doors at the far end—FIRE! 😉

I had serious misgivings about staying at such a dump, but I wasn’t about to be the first one to voice them. That’s why I bit my tongue when we saw the stained carpet and bedspread and wondered if I could make it until morning without ever setting foot in the bathroom.

If ever there was a room where you’d find a dead body minus a kidney in the bathtub, this was it. 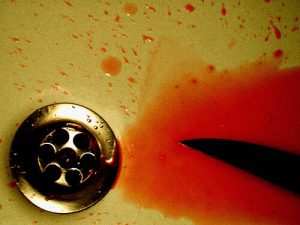 “Oh, no—no way. We are not staying here. We’ll sleep in the car,” the investigator said.

Palmetto bugs are a fact of life in the South. I have found the occasional dead roach in otherwise clean rooms and not held it against the business. (Sometimes they’re just not considerate enough to die where you can’t see them.)

But several roaches on the air conditioning unit—some dead, some still moving (and maybe snacking on their companions)—that crosses a line.

We didn’t sleep in the car. The place we finally ended up in was also dump, with a single bed and no hot water.

But a cold shower never feels so good as when you’re not sharing it with a dead body.