As of yesterday, No Safe Winterport, the fourth Sydney Brennan book, is live! Woo hoo!

Well, the ebook is anyway.

Apologies to my paperback readers. I’m still waiting for a paperback proof copy (yes, I’m that paranoid) to make its way across the wide Pacific Ocean. It’s unlikely that I accidentally uploaded my grocery list instead of the manuscript, but in this unreasonably hot summer anything is possible.

(By the way, I’m one of those people you hate in the grocery store because you think I’m that addicted to my smartphone; I’m actually staring slavishly at its screen because my grocery list is a photo of the whiteboard on the fridge.)

I thought I’d celebrate the book’s release by sharing a Magpie Moment, a bit of real life tucked into No Safe Winterport to make it shinier. Don’t worry—this one isn’t a spoiler since I assume you haven’t all blazed through 46,000 words within 24 hours of the novella’s release. 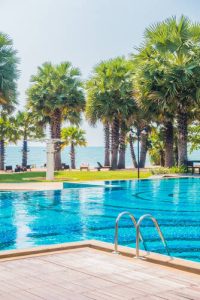 Lisa looked away from the road for an instant to give me an embarrassed smile. “The Delta Orlando. Well, the former Delta Orlando. I’m not sure who owns it now. My treat.”

Her sentimental choice helped me let go of most of the rest of my frustration. Our family had stayed at that hotel after natural disasters, electrical and plumbing disasters, and occasionally just because. (Those were Mom’s words, and come to think of it, she’d been behind the bulk of the non-natural disasters, too.)

-Chapter One, No Safe Winterport

My husband and I stayed at the Delta Orlando Resort many years ago. The Ritz-Carlton it was not. The rooms were generic and unmemorable, as were the restaurant food and the drinks from the poolside bar. It was very much a cheesy Orlando tourist place, and we were very much not Orlando tourists.

And yet, at that moment in time (I was a stressed-out law student accompanying my conference-attending husband), the hotel was perfect.

Maybe it was the anonymity. The demographics deck was surprisingly well-shuffled (people from all walks of life and countries) and it felt a bit like a way station in a Twilight Zone episode, the kind where you’re between worlds but you don’t know it until the end. You could be anyone, with any story, and no expectations.

This included a fair number of business people, I assumed because it was convenient to the airport. The businessmen (I only noticed men) wore suits but didn’t travel in packs, so they seemed freed from many expectations as well: no power breakfasts, elevator huddles, or debriefing dinners.

In fact—in my memory at least—people overall just didn’t seem stressed. (Anyone who says that’s because most of them were on vacation has never been on vacation. You can feel the simmering meltdowns in many hotel dining rooms, of people ripped from the security of their daily schedules and forced to spend time with unfamiliar family members.) Whatever the reason, the dysfunction-free zone was refreshing. Like I said, total Twilight Zone.

We kept walking, past islands of tropical plants that gave a sense of depth and privacy to the landscape. Our feet led us to the Hot Tub Grotto that had fascinated us so much as children.

-Chapter One, No Safe Winterport

Yes, there was a Hot Tub Grotto at the Delta Orlando (you can see it on my Pinterest Board), and yes, we did have a moment of rudimentary German language camaraderie with some tourists in a heated pool. (Though, thankfully, no heated argument.)

Notice the verb tense… there was a Hot Tub Grotto.

Unfortunately, the Delta Orlando is no more.

According to that Oracle of Our Times, Wikipedia, it started out as an upscale Ramada Court of Flags but eventually slid toward budget accommodation. It was the Delta Orlando from 1991-1999. The exact closing date is fuzzy, but plans to remodel it as a Doubletree resort fell through after 9/11. I was surprised to see that it was actually demolished in 2006. I imagine Florida hotels persisting to become future archaeological goldmines, with decades, if not centuries, of remodeling strata.

I’ve linked to a fun website here that shows pictures of the hotel, including screen captures from their old website, and aerial views before and after demolition. But beware: the site is like an Old Florida nostalgia wormhole. Start clicking, and the next time you lift your gaze, shoulder pads will be back in and your Little Leaguers will be kissing your cheek on their way to college.

You’re right–I’m being ridiculous. Shoulder pads will never come back in.