This week, I’m sharing a shameful confession and some book news, both in a rather scattered fashion. First, the confession: I’ve fallen way behind lately on my word count.

Prepare yourselves for the justification/excuses section, without which no confession of underachieving would be complete.

Our household menagerie has gotten complicated lately, what with two stray dogs with health issues and a resident perfect dog that we’re suddenly realizing is not quite so perfect. I suspect single dogs are like only children this way; you don’t realize the level of their dysfunction until they have another dog/sibling to bump up against. (Did I mention I’m an only child?)

Fred has also been wearing a post-eye surgery cone (nothing serious). Let me tell you, the swath cut by a 72-pound conehead dog (he’s getting chunky) resembles that of a small tornado. Then there’s the cat stirring things up the moment everyone settles down. (Lately, I’m thinking Coyote or Loki would have been better names for Ninja Kitty.)

Life got even more complicated over the weekend when my husband and “the boys” had a run-in with another pack of six dogs (at least two of which were off leash).

The resulting melee sent us to both the emergency vet and the human emergency room. Guess which one costs more… 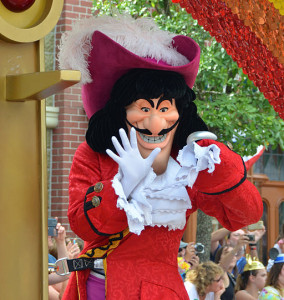 Fortunately my husband has a pretty amazing immune system (except for crazy flu strains—those are his kryptonite), so he will not be dressing as a very convincing pirate this Halloween.

(Did you know that Captain Hook is Capitaine Crochet in France? Seriously.)

As for the dogs, Travis (the stray in the worst shape, not entirely house trained) suffered the brunt of the attacks, so he’s been recovering inside with everyone else. The dogs have been mostly good, but monitoring the three of them (and their water intake) constantly is fatiguing. At night, one of them (I’m looking at you, Fritzenberg) scratches incessantly, and the conehead keeps trying to crawl under the bed. So I’m cranky and sleep-deprived. Have I missed anything?

The regular feedings and medicating (mostly the dogs), maintaining the no-playing-in-the-house edict when conehead starts clobbering everyone with his ginormous head… what else? Oh yeah, Part 2, the post-justification, I-have-news-about-book-things-you-actually-care-about portion of our program.

I may not have gotten much writing done, but I did get the Sydney Brennan books up on another retailer (Smashwords) and do some price adjustments. The first ebook Boxed Set (Books 1-3) has been reduced to $5.99 (USD) because Back to Lazarus is now a free ebook on all platforms. 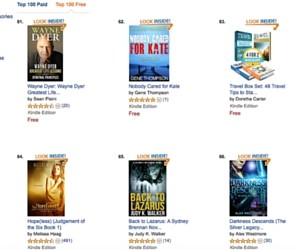 It’s only been a few days, but without advertising, Amazon and iBooks have had consistent downloads, and the other retailers are starting to trickle in as well. On Wednesday, I had one of those inexplicable spikes and over two thousand people downloaded Lazarus on Amazon. I actually made the overall (meaning all free books in all categories) Kindle Top 100–woo hoo! It felt pretty weird to see Sydney on the same page with the late, self-help guru Wayne Dyer.

So why go free? The conventional wisdom among indie writers is to set the first book in a series permafree, reaching more readers and funneling at least a portion of those readers toward the rest of your books. I’ve been very resistant to the idea, but I’m simply not reaching enough people to make the numbers work without a free book, so we’ll try it for a while and see how it goes.

Regardless, I want to thank you, my tribe, my PI Peeps, who took a chance on an unknown writer and purchased copies. One reason I feel able to go permafree is that I’ve broken even on my costs for Back to Lazarus (not including my time, which is apparently priceless). So again, thank you, and I hope you keep reading.

In fact, here’s hoping we all have decadently uneventful, book-filled weekends. 😜