This week, I’m making a shameful confession of a different kind. (Last week’s was word count-related.)

We’re going back to the third Sydney Brennan book, The Perils of Panacea, for a Magpie Moments post today, and back into the recesses of time and memory to find the real world source material that acted as inspiration.

A little context with as little spoiling as possible: in the following excerpt from the book, Sydney is driving a car with … let’s just say, someone with whom she’d rather not be driving. 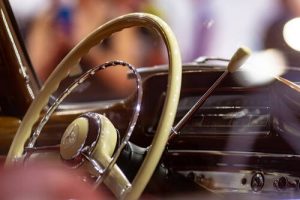 I started the engine and shifted the gear on the steering column, passing Drive the first time and having to go back for it. We lurched a bit when I hit the gas, so I paused to adjust my distance from the pedals again.

“Keep to the speed limit in towns, no more than five miles over outside of towns,” he said.

Chatty Cathy did not respond.

“I totaled the Driver’s Ed car,” I said.

Fine, I didn’t want to talk to him either.

—Chapter 41, The Perils of Panacea

Forget fire fighters and policemen. Forget air traffic controllers. To find individuals who both display exceptional bravery in the course of their jobs—their callings!—and deal with unimaginable stress on a daily basis, we need look no farther than our local high schools: the unsung Driver’s Education teachers.

Keep reading for what those in the criminal defense field like to call mitigating circumstances.

When I was in high school in West Virginia, Driver’s Education was offered as a for-credit course. It was a great opportunity for kids in a rural, far from affluent area. Not only did the school provide instruction, but you could use their car to take the test. (And drive together to get there—the testing center was in the county seat, at that time about forty-five minutes from the town where most of us lived.)

In addition to classroom instruction, we rotated through driving practice. We started by driving in circles on the little hilled cul-de-sac at the school. The first day a friend almost drove us straight off the side of the mountain—I’m looking at you, Miss H! Then we progressed to driving up and down and around the curving hills on the two-lane roads “off campus.” 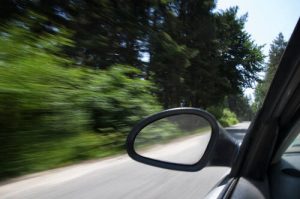 I’d had some hardcore training on hilly, gravel roads with my best friend’s dad—he’d unexpectedly use his damn long legs to stomp the brake while we drove his manual transmission truck—as well as experience in other circumstances I won’t detail for fear of incriminating myself and others. (Hey, Mom.)

In other words, I was fairly confident, and I had what my poor, martyred Driver’s Ed teacher called a “lead foot.”

One week, it was my turn behind the wheel, and we were on our way back to school. That was always a nice feeling because class was near the end of the day, and we’d be catching the bus home soon. We were nearing a convenience store that was a bit of a landmark, being the only one for miles and sitting alongside an intersection.

Let me be clear—I was on the main road, with no reason to stop or even slow my progress, and had the right of way. The car approaching from a side road had a stop sign. And didn’t stop.

My Driver’s Ed teacher said, “Slow down there, Judy,” as we approached the intersection, somehow anticipating trouble. But I was sixteen, I was driving the speed limit, and I was in the right (as only a sixteen-year-old can be). Ah, but welcome to the world of Defensive Driving! When I finally clued in that the other car wasn’t stopping, I turned the wheel enough so they caught the right front instead of hitting us directly head-on.

My friend in the back busted her lip on the front seat because she wasn’t wearing her seat belt. (Remember, boys and girls, this was the olden days, shortly after the horse and buggy.) My arm ached from being jammed into the steering wheel, but I wasn’t about to admit it, especially when the ambulance showed up for the elderly driver of the other vehicle celebrating his… wait for it… 80th birthday. Yeah. Maybe he was under the influence of too much cake. 😂 Bless his heart. 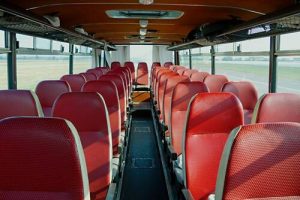 We were just minutes from school so another teacher drove down to meet us. We sat in his SUV while the two underpaid educators did most of the interacting with the police.

I was assured that I hadn’t done anything wrong, and there were no repercussions for me legally. However, the convenience store just happened to be where the fully loaded high school bus stopped to pick up its driver. (Don’t ask—rural busing is way complicated.)

That meant everyone on the bus saw us, saw the crunched car, saw the ambulance.

Thus the birth of my nickname the next day: “Crash Walker.” (It probably didn’t last as long as it felt like it did.)

In other non-legal repercussions, since the Driver’s Ed car was totaled, we had to use the crappy back-up car for class and to take our tests. Also a boat, it had the shift on the steering column, but the little gear-indicating ticker was broken. I’d never quite memorized the gear positions, so I’d just put the car in gear, let off the gas and wait to see if we moved, and if so, in what direction.

I remember asking the examiner before backing out of the parking spot at the Department of Motor Vehicles, “Does that feel like reverse to you?” He admitted, after an otherwise uneventful test, that I should get an automatic fail because of the condition of my car, but he’d let it go this time because it wasn’t my fault. Little did he know.

For the record, in the twenty-five years since then, I have never had another vehicular accident. At least not as a driver. I’ve never had a speeding ticket, or a non-parking ticket of any kind. Though since I’m confessing, I did spend several months dodging police checkpoints in New Orleans because of expired tags.

I do still have a slight lead foot tendency, even in a hybrid, but here among the relaxed (and occasionally stoned) drivers of rural Hawaii, I feel like a speed demon when I reach the speed limit. Still, being able to say you totaled the Driver’s Ed car does have a certain cachet. 😉