I’m posting this on July 1st, so Happy Canada Day to our neighbors to the north! And Happy almost-Independence Day in the U.S.! (Apologies to the Brits if you feel left out; in light of the recent Brexit kerfuffle, you’re welcome to crash our parties so long as you don’t bring Pimm’s.)

This holiday season seems a particularly appropriate time to share a cautionary Magpie Moment (bits I snatched from real life and incorporated into my fiction).

To set the stage, Sydney has just returned from a prison visit that included a detour for a box full of pastries. Her overworked, irritated eyes have become an angry, gooey mess, and her friend Ralph is convincing her to go to Urgent Care before they close.

(Non-Americans, that’s somewhere between a regular doctor’s office and the emergency room, where you can show up without an appointment for something urgent but not life- or limb-threatening.) 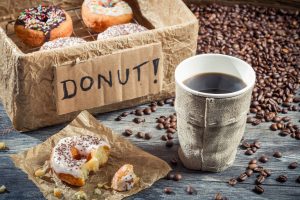 “Give me your keys,” Ralph said. “I’ll drive. Don’t forget to bring the pastries.”

I shook my head and tried to roll my eyes at his one-track mind, but my eyes were locked in place in the socket by some kind of goo.

“What?” he said, indignantly. “You don’t remember the shrimp?”

“Point taken,” I said, grabbing the box. Never have friends over at your office eating fresh boiled shrimp on a Friday evening, and then forget to clear the counters and take the trash out. It makes for a more unpleasant than usual start to the week on Monday. Not that cannoli would reek of fishy death, but I’d learned my lesson on unattended food.

For the record, I did not leave boiled shrimp bits on the counters and in the trash. My boss at the time did. I arrived at work one Monday morning and opened the door to a stench so vile I was sure that either something had died or something needed to be put down. (Zombie apocalypse, anyone?)

Did I mention this was Tallahassee, Florida, in the summer? 😝

An odor like that quickly affects your brain’s ability to process thoughts. Have we been pranked by the State Attorney’s Office? Actually, other defense attorneys or investigators were much more likely candidates. What should I do first: bag up the rot and take it outside, or open all the windows? The correct answer is not, stand there dumbstruck and wait for a house elf to magically appear. Will the ceiling fans help usher the stink out the windows, or simply ensure it’s evenly distributed and absorbed by every piece of fabric and scrap of paper and every pore in my body?

Let’s just say I got a lot of canine sniffs when I got home.

I’m a little surprised we didn’t have any similar experiences when we lived in Louisiana. The couple in the other half of our shotgun did stink up the house and set off the fire alarm in the middle of the night baking some kind of fowl with a beer up its butt, but that’s not quite the same thing. 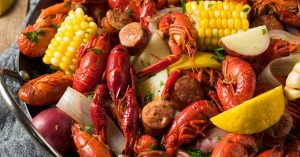 If you live anywhere along the Gulf Coast of the U.S., there’s a good chance you’ll be tucking in to boiled seafood sometime this weekend. Not that the Gulf Coast has a monopoly on seafood binging.

One of my fondest childhood memories is eating Chesapeake boiled crabs during summer visits to my Maryland aunt. My cousin would bring home garbage bags full, and I imagine my aunt struggling to make room in the refrigerator while the rest of us sat at the table for what felt like hours. (Those shells are devilishly complicated when you’re six years old and too stubborn to accept help.)

Occasionally we’d take some home to West Virginia with us, only to ultimately spend the remaining days until our weekly garbage pick-up trying to decide—stink up the house, or guard the garbage cans from dogs, cats, raccoons and other various critters within a two-mile radius every night?

So remember over the coming days, when it comes to your holiday spread, in the immortal words of the decrepit Grail Knight to Indiana Jones, Choose wisely.

Make sure you have a hazardous waste disposal plan in place for whatever you prepare. And if you’re traveling, unless you have a car detailer on speed dial, ignore the siren song of the roadside food vendor, or stick with boiled peanuts. There’s less risk of food poisoning, and your car upholstery will thank you.