I’ve mentioned before on the blog that the Stories I Love (use the Category dropdown to read all of the posts) are those where I feel a real connection with one or more of the characters. Not only that, but character trumps all for me—it’s much more important than the plot. That was driven home once again last week when we watched the latest recommendation from my Facebook Page: Endeavor. (Thanks, Maureen!) 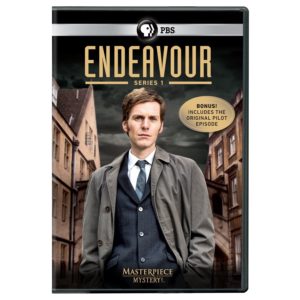 Endeavor is an ITV/Masterpiece series chronicling the early years of Inspector Morse (from the Colin Dexter books and the previous ITV series), the years before he became a Chief Inspector, and before he began driving his ubiquitous red Jaguar. It takes place in Oxford in the mid 1960s when Endeavor Morse is a lowly Detective Constable. He’s pulled from general duties during a murder investigation, and begins drifting from his lowly assigned tasks toward his own avenues of investigation. This doesn’t make Endeavor popular with some of his colleagues or the Police Chief Superintendent, but his intelligence and initiative catch the eye of Detective Inspector Fred Thursday.

Although not a die-hard fan, I’ve seen enough episodes of the original Inspector Morse show to appreciate the parallels Endeavor creates. Inspector Morse is brilliant, but not the most patient man. The younger Endeavor is also brilliant, but he’s inexperienced, and he has the arrogance of youth. Quick to jump to conclusions and confident that he’s right, Endeavor misses things (especially early on) that the older, time-hardened Morse would not. (Not that the older Inspector Morse is infallible; in fact, he’s far from it, which is part of his charm.) Endeavor needs to spend time in the field, and he needs to learn some humility. He needs to learn how to make nice within the political structure of the police force. (He also needs to pass his Sergeant’s exam.)

Throughout the first season, Endeavor shuttles back and forth between general and detective duties, but he always manages to make his way back to being Thursday’s driver and protégé. I love Roger Allam as Thursday (though I forever want to call him Friday), and I love the relationship between him and Endeavor. Thursday slowly welcomes Endeavor into his family, and he tries to protect the young man, but he does admonish Endeavor when he goes too far. A nice relationship also develops between Endeavor and Police Constable Strange (who features in the later Inspector Morse). Strange befriends Endeavor, seeing something in him that the rest of his young colleagues do not. Strange tries to help Endeavor pass the sergeant’s exam (that he himself is sitting for), and Endeavor brings Strange into murder investigations whenever he can. Theirs initially seems an unlikely friendship, but it works. 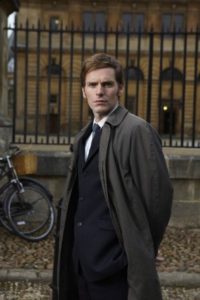 Shaun Evans does an excellent job portraying Endeavor, a vulnerable young man at a transition point in his life who finds it difficult to belong anywhere. He’s not the friendliest person you’ll ever meet, but he has the added baggage of an (unfinished) Oxford education that he received on scholarship. Basically, he doesn’t fit with any level of society. Of course, British society is at a transition point as well. We see this in everything from the contrast between Endeavor and Thursday (a veteran of World War II), to the corruption that permeates the police force in an effort to maintain the status quo, to the glimpses of Thursday’s family life.

Endeavor (the show, not the character) does have an Achilles heel. In all but one or two of the five episodes, the murder’s solution was… [running words through my filter because I do love the show]… flawed. Whodunit is either completely inconsistent with the way the characters were portrayed, inconsistent with the physical evidence, or both. For the record, this isn’t just me being anal because I write mysteries; each time, my husband and I spent twenty minutes analyzing everything that was wrong. Here’s my theory: the writers start with a character arc, build in things they want to happen, and save the murder’s identity for last. And they don’t just want Endeavor to be instrumental to the solution, they want the solution to be something that reinforces how brilliant and unique Endeavor is. In one episode, they actually have him explain the solution to the murderer and his colleagues using flashbacks of things he did off camera. In other words, the viewer doesn’t even get to see all of the evidence until Endeavor does the Great Reveal. Not cool. The ironic thing is that I don’t even care who did it; I’m there for the characters. But it annoys me when a show tries to dazzle me with an impossible solution just to avoid one that’s ordinary.

Despite my plot misgivings, I do recommend the show, and we’ll definitely watch the next season. Maybe we’ll just stop each episode five minutes before the end. 😉