I know—I’ve been mostly absent after a break from the blog earlier this year, which is why one does not break habits! (Year-plus DuoLingo Russian streak, I’m looking at you.) So I thought I’d pop back in for a relaxed check-in and gradually build those blogging muscles back rather than pulling something the first time out.

I’m coming to you from Bizarro World, which isn’t solely a reference to the continuing “Panda Bear” drama, or the “Corbin Bernsen Times,” if you prefer. (In today’s episode of Random Tangent, did you know the actor is married to the lovely Amanda Pays, aka Max Headroom’s Theora?)

Like many states, our case numbers have taken a dive of late. Or rather, what’s the antithesis of dive—a stratospheric jump? As in flinging yourself into space, not falling from it.

But that’s not the only indication our world is upside town.

It’s August, summer here in East Hawaii. Or is it?

Summer is generally our “dry” season, so much as one exists. Except someone forgot to tell that to the cloudy, socked-in sky.

Don’t get me wrong—I’m not complaining! I definitely don’t want the triple digit (F) temperatures many of you have been enduring. Nor do I want the wildfires that are eating up much of the American West Coast and other places around the world, including leeward Hawaii.

It feels weird, though, to be watching our battery levels and occasionally hearing generators run in August.

(We’re not the only off the electrical grid, reliant on solar power folks in our neighborhood. On the other hand, everyone is on catchment water, so it’s nice to have those tanks topped up.) 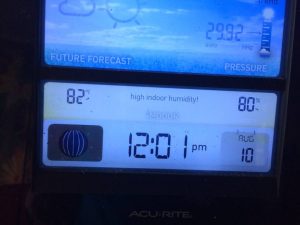 We’re not even getting heavy rainfall—it’s just unremitting wet. All. The. Time.

A few days ago, we had a particularly thick-aired morning when I felt as though I’d never stepped out of the shower, in a bad way. I got excited when our humidity finally dropped below 80% at exactly noon. By the time I snapped a picture, it had gone from 79% back up to 80%. Did I mention that’s the humidity in our house? 😳

Something I’ve noticed about the ongoing nineteen months or so of relentless Crazy Times is that when something seems weird or unusual or wrong, you start to think, Maybe it’s me; maybe I’m crazy. You think this about big, important things and insignificant things alike. You question your ability to accurately perceive own experiences. Whatever that means.

This whole rainy summer situation is a good, non-emotionally-charged example. Maybe it’s not unusually wet. Maybe I just forget from year to year what the seasons are really like. Or maybe, just maybe, it’s not that wet and dark. Maybe I just see it that way.

That’s where my funky, mold-addled head resided a couple of weeks ago—maybe it’s just me. Fortunately, I had four and a half years of rain gauge data jotted on a clipboard and a perpetual fondness for going headlong down rabbit holes.

Several hours of keyboard tapping and clicking later, I was vindicated. July 2021 was the rainiest July we’ve had since we got our rain gauge in 2017. And less than halfway through August, we’ve already exceeded the August 2020 rain. (Please, God, let’s not beat 2018! That’s the year Hurricane Lane gave us nearly 44 inches in four days, propelling us to a stellar 225+ inches for the year.)

Guess what—you don’t have to spend hours in Numbers to be vindicated. (Really, Apple, Numbers is the best you could do?) Because it doesn’t matter what the spreadsheets say.

You are not crazy.

Okay, fine, if you’re reading this in 2021 you probably are. But no crazier than anyone else. Hmm, that didn’t sound as reassuring as I intended. How about, crazy in the best possible way? 😂

In case you’re interested, today’s rain total (from yesterday): 0.6 inches… and a coqui frog. It was still alive, just chilling in the rain gauge, waiting to freak out my husband by jumping in his face first thing in the morning. Happy summer, y’all.