You ever wonder if all of our technology (or maybe artificial sweeteners or gamma rays from another galaxy) is making us stupid? Do you wonder what’s happened to our basic common sense? Don’t worry—this isn’t one of those back in my day we knew our times-tables rants. It actually dovetails with some research I’ve been doing, but I’ll start with a recent personal experience. 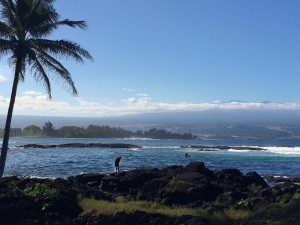 Earlier this week, I drove to town to run some errands and stopped for a snorkel. The lifeguards had put out the High Surf and Strong Current signs. It was sloppy, and the sets rolling in weren’t very impressive, but there were a bunch of boogie boarders and a few surfers out. The sky was overcast and the water was cold (low-ish tide with lots of freshwater pumping in). It was also surgey, with currents running in every direction except back to the entrance, so I hung out relatively close to shore, content to just chill and spend some quality time with the fish. There were a couple of schools sheltering inside that normally cruise deeper water, and everyone was swaying back and forth. When I grabbed on to bottom rocks to stay submerged and immobile, curious saddle wrasses and Moorish idols would swim right up to my face, as if to ask, how do you do that? I’m getting seasick over here.

The fish had more sense than the humans. Every time I surfaced, I’d see another potential rescue, someone else (or a group of someone elses) who believed both that the Pacific is just a swimming pool with fish, and that nothing bad can happen on vacation. A man and his adult son, both sporting buzz cuts, swam past me straight out toward the break, sucking wind the whole way. They looked exhausted before they were halfway there, and I had to wonder what they’d do when they realized they’d been riding the main current out and had to fight it to get back in. I also wondered how long it was until the lifeguards went off duty. 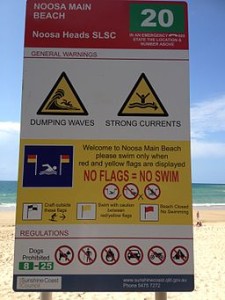 On my way out, a tourist with his young daughter in tow was pressuring his teenaged son (fourteen at most) to get in the water. The son, bare-chested and looking cold clutching a cheap boogie board in his arms, was skeptical. Small but surprisingly powerful waves were breaking in the entrance, so I went over and told the kid where rocks were hiding in the black sand beneath the water so he wouldn’t break a toe. He thanked me, and as I grabbed my gear bag, I saw his dad—standing between the High Surf and Strong Current signs—pointing for the kid to join the locals in the far break. Pointing repeatedly. The urge to slap him—the idiot dad, that is—was almost overwhelming

Another group of tourists by the showers wanted to know where the sand was. My initial answer (on the other side of the island) was met by mostly stares and a single appreciative snicker, so I gave them some pointers on getting in the water and recommended an alternate, more sheltered beach they’d passed on the way to this one. I told one woman it wasn’t a very good day for swimming. “Why not?” she asked, never once looking out at the water. There weren’t any rescues during my short time at the park, but between the recent holiday weekend and the sloppy winter surf (and people disregarding signs), I know the lifeguards have been busy lately. (I have a totally unsubstantiated theory that people pay more attention to the symbol signs than they do ones with words, because they’re bright yellow and it takes a while to figure out the pictures.)

I’m not trying to pick on tourists (being a tourist myself anytime I leave The Rock). After all, accidents happen, whether we’re at home or on holiday. But there is a sense (and some research to back it up) that we often forget to pack our common sense when we leave town. We don’t look when we’re crossing traffic and display abysmal street smarts when traveling to strange cities. We eat things we wouldn’t normally eat that we know will make us sick, and attempt physical feats we wouldn’t normally consider, feats that we know will make us at best sore the next day, and at worst a statistic. We embark on adventures, totally unprepared and with unrealistic expectations, because, hey, we’re on vacation!

This dynamic is on my mind because I’ve been thinking about doing a standalone, non-Sydney Brennan book set in Hawaii, so I’ve been looking at stats on some of the unexpected (or at least underestimated) hazards a visitor might face here. (Listening to the morning news, I’d be careful crossing the street in Honolulu—sounds like pedestrians are an endangered species there.) So what’s the biggest non-ocean attraction on the Big Island? Volcanoes, of course! People traveling to Hawaii Volcanoes National Park have gotten disoriented while hiking, fallen into cracks, succumbed to toxic fumes, and died when newly formed lava benches collapsed beneath them. (Forty people died in HVNP between 1992 and 2002; that’s probably not that many in the big scheme of things, but it still surprised me.) 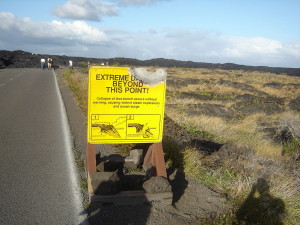 Data diversion: I should warn you, I love data, so the following unpreparedness stats are an example of me being restrained. A 2001 survey of more than 800 HVNP hikers finishing a 4-10 km trail (finishing being either leaving or seeking first aid) found that over half had no previous experience hiking in wilderness areas. Posted signs advise a minimum of three liters of water per hiker, as well as wearing sturdy shoes, long pants and a hat. The reality? 73% of hikers carried less than one liter of water. (Americans, a liter is about a quart.) Only 14% wore hiking boots—7% wore dress shoes. About the same number of people wore long pants (37%) as wore hats (38%). Perhaps the hikers were unprepared because fewer than 25% of them bothered to read the trailhead information signs or speak with a ranger before they hit the trail. But 93% of the 500 or so hikers who made it to the lava’s ocean entry admitted they’d read the warning signs, but ignored the warnings and hiked on past (and off trail) for a closer look.

It doesn’t take much searching online to find numerous articles demonstrating that hikers on Mauna Kea and Mauna Loa (also volcanoes, by the way) don’t necessarily fare better. You may not encounter hot lava, but hiking on those grand mountains (both nearing 14,000 feet) amps up the dangers of exposure. Can we say blizzards in Hawaii, boys and girls? That’s when failing to use common sense means you might not make it home to tell your poor judgment vacation story. Like the man who disappeared after leaving the Mauna Kea Visitor’s Center to try the ascent in only his shirtsleeves, despite a ranger warning him of the difficulty and an approaching snowstorm. His remains were found six years later.

Let’s not forget the gulches. People hiking in remote valleys can also get irretrievably lost, injured in landslides or falls, or drown when they’re swept away by falling into rivers, swimming near waterfalls, or getting caught in flash floods. (There are a lot of falls generally; falling was the third leading cause of fatal injuries and leading cause of non-fatal hospitalizations for visitors from 2008-2012.)

So for those of you planning your vacation now, at the risk of triggering a 1980s flashback, Let’s be careful out there, people. Wherever that plane ticket takes you, don’t forget to pack your common sense.

[Photos: Beach park (on a calmer day) by Judy K. Walker; Noosa Heads SLSC sign at Noosa Main Beach by Kgbo, and Lava-damaged Hawaiian Sign by Kip Robinson, both from wikimedia commons. Statistics: The mentioned HVNP study is detailed in the 2004 Wilderness and Environmental Medicine paper by Heggie and Heggie, “Viewing Lava Safely.” Other statistics are from the Hawaii Department of Health.]