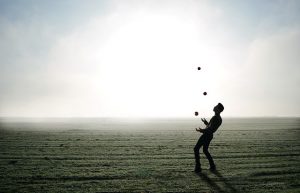 I’ve got a lot of balls in the air right now (the metaphorical kind; me attempting to juggle is a precursor to an emergency room visit), and I can’t wait to tell you about them! However, I think I’ll be restrained this week so I can give you more details when I do share.

On second thought, I will mention one little thing that’s more of a PSA (public service announcement) than something to be excited about. There’s a bunch of shuffling behind the scenes at my website right now, trying to ensure all its pieces are in working order. (Apparently they weren’t before.) If you contacted me in the past week or two and didn’t get a response, your email may have fallen behind my website’s couch cushions. Don’t be shy about emailing me again—if I haven’t responded in a reasonable amount of time, I can pretty much guarantee it was a tech problem. Also, if you run into issues with my website or social media, please drop me an email or a Facebook comment or a shortbread fortune cookie (is there such a thing?) via drone and let me know. I can’t fix—or more likely get someone else to fix—what I don’t know is broken. 😛 End of PSA.

The balls in the air bit wasn’t just meant as a teaser; it’s also an excuse. Last blog post, I promised a teaser of another kind—a blurb for the upcoming Book Two of the Dead Hollow trilogy, Founder. I do have one for you, but with the caveat that it’s rough and will probably change. See above, basket full of balls in the air. Also, for the record, book descriptions are hard! I’ve decided they’re even more difficult when it’s Book Two of a trilogy and one walks a fine line between saying too much and saying too little. You know I find spoilers morally reprehensible, so I’m doing my best not to spoil Book One in case someone stumbles across Founder before Prodigal. They really should be read in order. The upshot is that, while Prodigal had a solid resolution, it did leave some open questions. Founder answers some of those questions, but it also adds a few more. (Imagine a huge, happy writer’s grin on my face as I type.) It is, after all, a trilogy.

So, without further ado… Founder!

Someone has been arrested for the kidnapping of Rachel Nicholson, and the community of Cold Springs is determined to return to normal, to a time when their children were safe. But their complacency creates opportunity for a man in the shadows, a man who’ll do anything to get at Adam Rutledge.

Still recovering from recent events, Adam likewise wants nothing more than to pretend the past few weeks never happened. Instead, he finds himself losing touch with the world around him and falling deeper into the past.

When the unthinkable happens and another child is taken, all eyes turn toward Adam, whose role in finding the previous victim cannot rationally be explained. Soon Adam is on the run searching for answers, about himself and the boy’s disappearance. But can he live with the ones he finds?

Mwah-ha-hah! (I wish I had that as my ringtone, except then I’d have to turn my ringer on.) Okay, so the promise for next time that I’ll regret making the night before: the Founder release date! Actually, let me clarify: I’ll do that in the next regular blog post (in two weeks). But I will be breaking the mold and posting something here next Friday as well, something you won’t want to miss. And me with my mwah-ha-hah for the blog post already spent. Sigh…