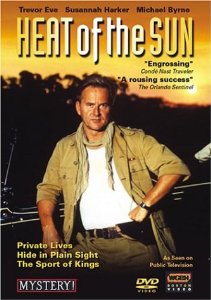 I love Game of Thrones, but Season 3 has been staring at me from its box set for weeks, calling me names, daring me to lose several days of my life to its narrative of bloody vengefulness. I’ve sidestepped any real spoilers, but it’s impossible to avoid the pervasive sense of “bad shit’s gonna happen” that permeates the Internets. And I’m just not quite ready for that right now. I need to build up my reserves before I watch them impale a kitten on a baby unicorn, or whatever it is they have in store.

In the meantime, there are certain stories I return to when I don’t feel like watching or reading anything else, stories that make me smile involuntarily with the opening notes of the theme or first words of the prologue. Stories I Love. And I want to share them, because sharing stories is what it’s all about. So let’s consider this a semi-regular feature.

To set the stage for our first installment, turn off your air conditioning.

The place is Nairobi, the year 1931. Scotland Yard Superintendent Albert Tyburn (Trevor Eve, of BBC’s Waking the Dead) has been exiled to an African backwater for his conduct in a previous investigation. (We witness the requisite dark backstory for our hero in the opening scenes.)

The day he arrives, Tyburn is assured that the worst he will have to deal with is parking tickets and a condescending, overbearing superior. (Burkitt is deliciously played by Michael Byrne, with hints of his Indiana Jones Nazi villain; every time he opens his mouth we add another adjective: racist, misogynistic, anti-Semitic….) And oh yes, there is a missing woman—probably nothing to worry about. Except of course the missing woman is found dead, within 24 hours of Tyburn’s arrival, and the body count continues to rise. Welcome to Heat of the Sun. 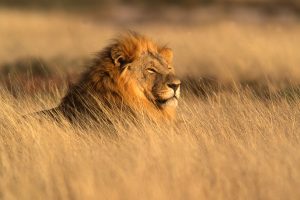 Heat of the Sun is one of the WGBH-produced Mystery! Series hosted by Diana Rigg. She gives some tantalizing, gossipy—I mean, historical context—for the three episodes (only three!) while standing next to a fake tent and sporting tasteful leopard print lapels. (I would fast-forward through her episode introductions on first viewing though; I think they give away too much.) In addition to providing hours of solid entertainment, I think there’s a lot we can learn from the show as storytellers.

1) Start in the middle. Not necessarily with things blowing up or someone being murdered, but with a building tension or expectation that things are going to happen. The backstory I mentioned feels like prologue. The story really begins as the theme and opening credits roll, and we arrive in Nairobi on a train with Tyburn. We join our protagonist in the middle of a huge life change. Change is good (as long as it’s happening to our characters). How comfortable is he in the crowds on the platform? How does he deal with a young pickpocket? With a taxi driver? All of these things tell us about his character, but other seeds are planted there, too. Elements of everything that will happen in the next two hours are foreshadowed in those first ten minutes. The burned buildings he passes, the bright yellow airplane flying overhead, and <ahem> other details crucial to our hero solving the case pass by our eyes.

2) The protagonist is an outsider. He notices things the people who live there no longer see. And because he’s an outsider, people can explain things to him (and to the viewers) that would otherwise seem forced or artificial. They’re usually doing this, not to be helpful, but to remind him that he doesn’t belong. Of course, there are levels of Outsider-ness too, each with its own unique opportunity to observe. The female lead, a Beryl Markham-esque aviatrix, grew up in Kenya but isn’t part of the society scene. (Emma Fitzgerald is ably played by Susannah Harker, aka Jane from the bestest version of Pride & Prejudice ever.)

3) All of the characters are fully formed people. After three episodes, I felt as if I knew what motivated every character. One technique was concise, understated dialogue reminiscent of film noir. Emma Fitzgerald learned when she was fourteen that her father thought she was not his child, and he didn’t support her financially. Tyburn asks how she dealt with this. Her response could come from Lauren Bacall’s Slim, “At fifteen, I learnt poker.”

Another technique—skillful editing and acting that show us without telling. The freshly arrived Tyburn steps from his cab directly into an altercation at the local club. This scene, interacting with a beleaguered servant and drunk ex-pats, does at least triple duty. It demonstrates A) the prevailing values of the society we’ve entered, B) that Tyburn does not share those values, and C) that Tyburn acts in accordance with his beliefs, damn the consequences. (Echoes of his backstory.) The ensuing kerfuffle is relatively short, but one of my favorite fight scenes ever. His fighting style isn’t exactly a Cambridge boxing match either, which goes back to C, or maybe on to D) Tyburn isn’t about appearances; the man just gets his shit done. 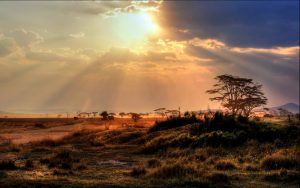 4) I could go on and on (shocker, right?) but I’ll wrap up with, setting is a character. I have never been to Kenya and know nothing about the wealthy expatriate set there 80 years ago. If you did your doctoral thesis on the subject, you’ll probably find things to annoy you, but for me there was total suspension of disbelief. The cinematography is gorgeous and, combined with the score, has an epic romantic feel. (Although the score can feel a little melodramatic; you just have to let go of your sardonic self and embrace it.)

The setting isn’t just a pretty backdrop. Setting helps determine action. For example, scale and remoteness play a role in every episode, and the aviatrix becomes enmeshed in Tyburn’s investigations because he needs her to schlep him around. Characters act the way they act because they’re acting within the framework of their time and place, their culture. At the most fundamental level, to solve the murders Tyburn must answer the question: what would a person in this place at this time (i. e. among the hedonistic “Happy Valley” set) commit murder to hide? It’s the kind of question we need to remember in our own writing.

2 Replies to “Stories I Love: Heat of the Sun”