You may have noticed the absence of Magpie Moments posts lately. That’s because I’ll be releasing the Sydney Brennan novella, Secrets in Stockbridge, on Saturday, November 22nd.

Trying to cross all my Ts to make that happen has kept me pretty busy, and I decided that I’d satisfied the spirit of my Magpie-Moments-until-next-release pledge so I could get everything done. However, I’m also aware that I haven’t talked about Stories I Love in a long time either. And I just happen to be dipping my toes into Season 2 of the delectable Miss Fisher Mysteries right now… 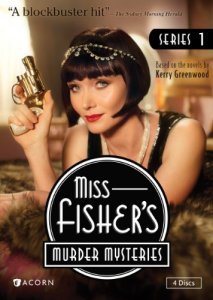 The Australians apparently fall somewhere between the Brits and Americans when it comes to season length; each season is 13 episodes. They feature Miss Phryne Fisher as a (eh-hem—throat-clearing noise) liberated, pearl-handled-pistol-packing, lady detective solving murders in 1920s Melbourne.

The costumes are fantastic, and the set design is pretty impressive as well. Kerry Greenwood, the author of the novels the series is based upon, drools over the set design in the Season One DVD special features. And who can blame her?

Clad in sequined, silk gowns or full, flowing trousers, with tasteful hats or elaborate hair ornaments gracing her perfectly bobbed black hair, Essie Davis definitely looks the part. (Seriously—her picture should be in the dictionary next to “bob,”; hers is the bob against which all other bobs shall be measured and found wanting.) And did I mention her Hispano-Suiza car?

The chemistry between Miss Fisher and Detective Inspector Jack Robinson hearkens back to an earlier time as well, with an almost noir-light feel. One example from the Season Two episode “Dead Man’s Chest”:

Phryne: Jack, shh! (The sound of a champagne cork popping) This is a temperance household; the sound of a popping cork could lead to my eviction.

Jack: More so than entertaining a man in your private parlour?

Phryne: A man? I thought you were a police officer. I’ll try my best to be less entertaining.

But Phryne isn’t the kind to pine for the Inspector, much to her sweet maid/companion Dot’s chagrin. 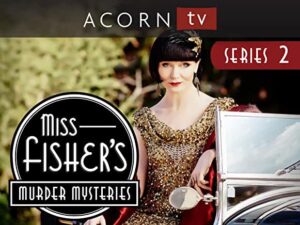 The Great War is over, but it has left its mark on everyone, and societal norms continue to shift in its wake. The clash between opposing ideas and ways of living in 1920s Melbourne is fertile ground for plot, both murderous main plots and character-driven subplots.

There is an ongoing romance between Dot, a good cardigan-wearing Catholic girl, and the Protestant Constable Hugh Collins. (In the second season, we get glimpses into the more disreputable aspects of their backgrounds.) Phryne’s aunt Prudence (aka Professor Sprout) provides entree to the upper crust, while Phryne’s two cabbie assistants Bert and Cec provide blue-collar grounding. Even the unflappable Mr. Butler has a skill set that occasionally hints at another (pre-buttling) life.

Phryne herself is obviously moneyed now, and immensely enjoys all the fine pleasures money can bring her, but we learn that hasn’t always been the case. She grew up in poverty, and apparently didn’t inherit money and titles until a sufficient number of relatives were killed in the war. There are references to her exploits in an all-women ambulance brigade during that time and her life in Paris afterwards, and a long-running thread deals with the murder of her younger sister when she was herself a child.

There is nothing revolutionary about the Miss Fisher Mysteries (although at least one of the cabbies is a devoted Communist), but the show is extraordinarily well-made, both in terms of production value and cast performances. Everything it does, it does well.

I’ve read that the author Kerry Greenwood has gotten negative feedback from some more conservative Americans over Phryne’s bedroom escapades. Her response (as I remember it) was three-fold. First, it’s tastefully done. There are no real sex scenes; everything is languor and inference and innuendo. Second, it’s historically consistent with the late 1920s, and the way the character lives reflects her response to all the senseless death she witnessed during the war. Third, if she were a man, it wouldn’t be an issue, i.e. you don’t see people up in arms over James Bond’s bed-hopping. (And his arguably threatened national security!)

To bring it back to the colonies, how many women did the lovable rogue PIs of the 1980s (Magnum, Nick and Cody, the Simon brothers, etc.) go through in a season?

On the other hand, there is a huge Phryne Fisher following on Pinterest (in addition to show shots, there are new Phryne-inspired clothes including cloche hats) so we are not alone in our Phryne devotion. I say “we” because my husband is a fan, and my mother is a convert as well.

The next time you’re looking for well-written, eye candy, comfort viewing, you could do worse. But be careful—one episode, and you might just find yourself perusing Pinterest boards on your lunch hour. 😉

If you like the Miss Fisher Mysteries, you might also enjoy my Sydney Brennan Mysteries. Sydney doesn’t have Phryne’s fashion sense, but they do share a climate (Australia and North Florida), wry wit, and a certain women-can-do attitude.

[Phryne “My Sins” birthday card is featured on the ABC Australia online store, though the link may have given up the ghost]