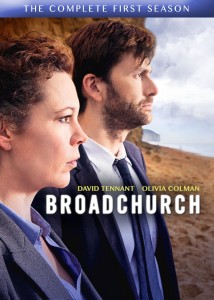 I’m breaking the mold a bit (if I’ve written enough of these to have a mold; maybe just a slight impression) on my Stories I Love series. Usually these are recommendations for mystery shows long past that you may have missed and are my perennial favorites. This time I’ve chosen a show that is (gasp!) still being broadcast, that I haven’t finished and could possibly go south on me before the end of the first season. Why? Because it’s really good, and I wanted to share just in case, for once, I’m not the last person on the planet to discover an excellent show.

This means I’m still fumbling my way through, with half-formed opinions and impressions, rather than having memorized my favorite scenes, so bear with me. It’s a BBC show called Big Cathedral. No, wait, that’s Broadchurch. (I’m poking a bit of fun at my husband, who was trying to remember the name of the show before his coffee kicked in. His version had a street in it.)

It seems that a lot of current shows, some of them very good, aspire for visceral reality through their depiction of murder. It’s almost as if the viewer is supposed to experience the victims’ physical pain by proxy, watching the pain being inflicted upon them in graphic detail. The first episode of Broadchurch is intense, but not because of graphic violence. Instead, you experience, in an honest and unsentimental way, what is usually a token shot or two out of an episode: the family’s grief.

Thankfully, the later episodes pull back a bit. I wouldn’t want to watch something that sustained that level of emotional intensity past the first episode. But when a good portion of the first episode is devoted to the child’s mother slowly, step-by-step, getting closer to the truth, and you never get a full shot of the murdered child’s body, you know you’re watching something different. 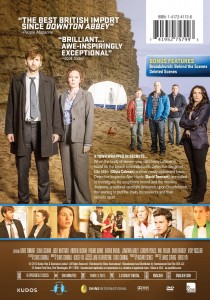 Broadchurch does feature a big, beautiful church, but the show is actually named for the (fictional) coastal English town where it takes place. It’s one of those series that follows the investigation of a single murder for an entire season, in this case an 11-year-old boy. (No idea what the second season covers; since I’m only halfway into the 8-episode first season, I’m avoiding spoilers like Ebola.)

The cinematography is amazing, and you’re immediately immersed in the small town, traveling through in It’s a Wonderful Life fashion, with people greeting each other as the day begins. (The accents may require some acclimation for colonials; I know my ears stumbled a bit).

I was also reminded of Twin Peaks, if someone other than David Lynch had made it. How, you ask, would Twin Peaks look if someone other than David Lynch had made it? First, leave out all the eccentric characters (there is no Driftwood Lady). In Broadchurch, there is that same sense of a small town with secrets, but all of the residents seem reasonably normal on the surface. As with Twin Peaks, the earliest divulged secrets are garden-variety hidden affairs and drugs. But you’re pretty sure some of the secrets aren’t so simple, and you get just a glimpse of them before the camera turns away. For example, why does a plumber need a crossbow in his van? What secrets would prompt an 11-year-old to delete his computer files and texts? And unlike Twin Peaks, the Broadchurch characters still look like normal people after that glimpse, as if they’re trying to maintain their secrets from the viewers instead of sharing their weirdness with the camera. [Note a Twin Peaks-esque image that keeps bugging me: what the hell are they doing in that glowing white crime scene tent on the beach for that long–counting sand grains?]

Even things that we’ve seen before (and sometimes many times before) feel fresh. Detective Inspector Alec Hardy is one example. (I am not a Dr. Who fan, blasphemous as that may sound, but I did recognize Tennant.) Here you have the obligatory haunted officer, trying to atone for his mistakes in a previous case. He’s also an outsider who hates the town, and just all-around a bit of an ass. (My husband compared him to Joel Fleishman in Northern Exposure.) But then he breaks the rules by not drinking himself to death, and he even has a therapist. He and junior officer Ellie Miller, a Broadchurch local and an open, caring person he nonetheless manages to piss off (he took her promotion; and did I mention he’s a bit of an ass?) make a truly odd couple, and I’m enjoying watching their relationship develop.

So, to recap, I’m really enjoying a character-driven mystery with a strong sense of place. Gee, that’s a shocker. Feel free to let me know if you’re a fan, but woe to the purveyor of spoilers. I swear, I will send my Ninja Kitty to wake you at 3 a.m. every morning until someone else commits a more heinous offense (and it’s hard to offend worse than spreading spoilers). Believe me, he can do it. After all, he’s a Ninja.

UPDATE (10/06/14): You’re all safe now from Ninja. We binge-watched the second half of the season last night. It gets less Twin Peaksy and more Police Procedurally as the season continues, but it is still well worth watching.