We’ve been exploring names lately on the weekly Magpie Moments Post, most recently that of my protagonist Sydney Brennan. Last week, we established that “Sydney” came from my childhood pen name. Congratulations to Lissa Weddington for deducing the origins of “Brennan” and winning a signed paperback of BTL! 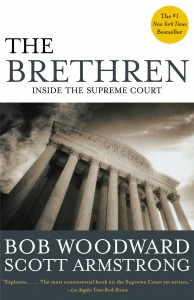 For lawyers that spend much time thinking about constitutional law, handicapping a Supreme Court case is a lot like handicapping a sporting event. Each justice has his or her strengths and weaknesses, pet issues and hot buttons.  There are some swing voters (though not so much lately) that can go either way, and others who will always vote the same way on a particular issue, even if Oliver Wendell Holmes (the Babe Ruth? Ted Williams? of jurisprudence) writes the brief in opposition from beyond the grave. For example, with the current court, if a news story begins: “In a 5-4 decision today, the Supreme Court ruled …”, then 9 times of 10 you already know the outcome, and you know who voted which way. Conservative outcome, with Scalia, Thomas, Roberts, Alito, and Kennedy in the majority, while Kagan, Ginsburg, Sotomayor and Breyer dissent. (By the way, if you enjoy behind-closed-doors nonfiction, Bob Woodward and Scott Armstrong’s book The Brethren: Inside the Supreme Court, about the Court during the years under Chief Justice Warren Burger, is eye-opening, and an interesting read.) 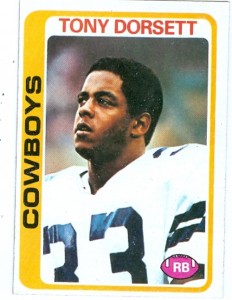 Sticking with the sports metaphor, when I sold my football cards for whatever reason (varsity jacket? college application fees? Pearl Jam tickets?), I held on to Tony Dorsett’s rookie card for sentimental reasons. (Yes, I was a Dallas Cowboys fan, but living a couple of hours outside Washington, D.C., I wasn’t exactly jumping on a bandwagon. Sometimes it felt as if I were taking my life in my own hands.) If there were USSC trading cards, I would preserve Justice Brennan’s in a special glass case, one with fancy lights. William J. Brennan served as a U.S. Supreme Court Justice from 1956 to 1990, spanning courts liberal and conservative and somewhere in between. Most of his beliefs mirrored my own (newsflash—I’m kinda liberal), but I also admire his eloquence and his dignity. I imagine his opinions written in script on parchment with a quill pen, read alongside the words of Thomas Paine or Thomas Jefferson. (After all, someone has to break up the Thomas Convention.) 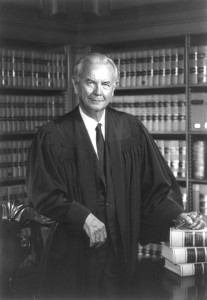 To give you a sense of his writing, I’d like to share a bit from Justice Brennan’s 1987 McClesky vs. Kemp dissent. First, some context: in that case, a Georgia defendant challenged the death penalty by statistically demonstrating that it’s racist. Even taking non-race factors into account, defendants were more than four times more likely to be sentenced to death if they killed a white victim than if they killed a black victim. (A white police officer was killed responding to a robbery by McKlesky and three other guys, so McClesky’s sentence was pretty much a done deal.) In a 5-4 decision (and those always make people happy) the Court upheld the death penalty, basically announcing, we’re not saying it’s racist, but even if it is, you didn’t prove it was intentionally racist against you.

It makes me think of Yossarian in Joseph Heller’s Catch-22:

“They’re trying to kill me,” Yossarian told him calmly.

“No one’s trying to kill you,” Clevinger cried.

“Then why are they shooting at me?” Yossarian asked.

“They’re shooting at everyone,” Clevinger answered. “They’re trying to kill everyone.”

“And what difference does that make?”

But I digress. (Another book it’s time to reread.) Here are a couple of choice snippets from Justice Brennan’s dissent:

“The Court next states that its unwillingness to regard petitioner’s evidence as sufficient is based in part on the fear that recognition of McCleskey’s claim would open the door to widespread challenges to all aspects of criminal sentencing… Taken on its face, such a statement seems to suggest a fear of too much justice.“

“It is tempting to pretend that [those] on death row share a fate in no way connected to our own, that our treatment of them sounds no echoes beyond the chambers in which they die. Such an illusion is ultimately corrosive, for the reverberations of injustice are not so easily confined…. [T]he way in which we choose those who will die reveals the depth of moral commitment among the living.”

Justice Brennan consistently opposed the death penalty (he and Justice Thurgood Marshall were often the lone dissents in capital cases). Think what you will about his position or the death penalty generally, but you have to admit the man could turn a phrase.

Historical Note: When asked after his retirement if he would change any of his votes, Justice Lewis Powell, who wrote the majority opinion upholding the death penalty, said McClesky v. Kemp. He went on, “I would [now] vote the other way in any capital case.” (The Death Penalty in America, Hugo Adam Bedau). Warren McClesky was executed in Georgia’s electric chair in 1991.