Or maybe I should say, she’s alive! She being me.

I know, I know, long time without a blog post. Before the floggings begin, I have to ask…

So what do you think of the new website?

Spiffy, huh? I’ve still got a few things to tweak, but it should be mostly functional. Let me know if anything makes your eyes cross or exiles you to 404 Error Land.

In addition to being pretty, the new design is a lot more user-friendly under the hood. In other words, you won’t hear me swearing while trying to make new retailer buttons for Sydney #8, The Grave Truth, in a couple of months. (If you’re my neighbor, no guarantees on other tech-related swearing; our satellite internet signal has apparently been rerouted through other galaxies lately it’s so slow.)

Yep, that’s still what I’m shooting for, although I have fallen a bit behind schedule. The website stuff took more time than I expected, as has migrating to another email provider. (I’m still troubleshooting, so let me know if you have any weird issues on that front, too.) 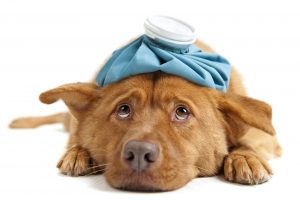 And then there was the dreaded Summer Cold, or as I’ve been calling it The Great Respiratory Plague of 2019. Ah, yes, I hear a chorus of coughs out there, and I know I am not alone.

The worst part was being hit in the productivity (that’s right above the doo-dads, in case you’re wondering) without the benefit of catching up on sleep. Unable to breathe through my nose and choking on phlegm, any attempt at sleep required propping myself precariously upright on the couch like a just-glued child’s woodworking project. And constantly sucking on a Ricola without swallowing it, should I doze off. (Doing so is a gift, up there with my independently moving eyebrows.)

After a couple of weeks, the cough still occasionally hits me as unexpectedly as Ninja Kitty on a strafing run, but I can see the light at the other side of the tunnel. Or maybe that’s just the door to the outside world.

As I said, I’m now a wee bit behind, thus today’s quick check-in.

But I can’t just leave you with images of mucus and misery. How about a snippet of Hawaii life that does not involve feral pigs? (Two minutes ago I watched a pig pluck lilikoi from our fence and crunch them noisily in its jaws; honestly, the pigs could have their own blog.) 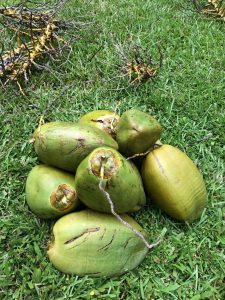 We haven’t had much luck with our coconut palms (or fruit trees, or veggies) here on our cindery lava and o’hia lot. Generally the largest tree alternates between tickling the wind musically with its fronds and scaring the crap out of me when it drops them in our yard and on the fence. However, it recently produced a bunch of coconuts that—for the first time—matured enough to require harvesting. Whether you’re a fan of coconut water/milk/flesh or not, the heavy buggers poised over the yard are a serious falling hazard.

We have a long pole with an attached blade for the purpose, but my husband still had to prop a ladder against the tree and stretch from the top rung like a pilates student to get at them. I stood clear while guiding his blade (up a little, back a little—you know, helpful stuff like that), and I’m happy to say no humans were harmed while harvesting. We’ve only tapped one so far, but yum, coconut water!

Now if only the pigs hadn’t destroyed all our pineapples. 🍹