I haven’t been reading a lot lately. The evening hours when I could do so are quickly lost to blogging and social media and website and retailer admin and all of the other writing-related activities that are not actually writing. Funny how that happens. You can hear me laughing, right? I swear that’s what that jagged sound is.

When I do read, like many people, I am a creature of habit. I recently read Patricia Briggs’ latest because she has two series that I (and my husband, who’d had a birthday) don’t miss. A few months back I read Michael Connelly’s latest Harry Bosch novel for the same reason. But what do you do when your favorite authors don’t have anything new, or you don’t have it to hand? (Also in this category, you have your instant-gratification ereader to hand, but were cut off during a recent group intervention culminating in the confiscation of your chargie cord.) 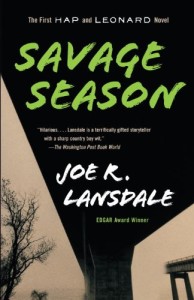 Last weekend, I had a few minutes to kill and a hold to pick up at the library… winner combination. I wandered for a while, pausing at authors I used to follow religiously but somehow lost touch with over the years. For example, Laurie King has a few Mary Russell books I haven’t read yet (featuring Sherlock Holmes’s much younger wife), but she hasn’t returned to the Kate Martinelli series. I picked up the first book in another series she’s started, and another book by an author I’ve heard of but haven’t read.

And then I saw it—a small section of Joe R. Lansdale. There was a tickle in my brain, one of those I know that name, but why? feelings. Fortunately, I know when to trust my gut. I pulled one from the shelf and began the work of finding a first in series. I wasn’t successful, but they did have Much Mojo, the second in the Hap Collins and Leonard Pine series (the first being Savage Season). Score!

Later that day, I fell into the hot, gritty world of rural East Texas of a couple-few decades ago (I’m thinking mid-80s, but didn’t see a date). When I read a book I enjoy, it’s hard for me not to bug my husband with favorite snippets of dialogue or exposition. I try to pace myself, not do it too often, watch from the corner of my eye for him to reach the end of a chapter before interrupting him.

That afternoon challenged my powers of restraint, with me first giving in on page 10. Hap describes at a funeral: “A woman in front of me, wearing a hat with everything on it but fresh fruit and a strand of barbed wire, shook and let out a wail and waved a hanky.” It’s everything I can do to not reproduce a paragraph of Hap’s thoughts on bathrooms in jail (“defecation is not a spectator sport”). Lansdale’s power of description, of getting to the heart of places and people, blew me away on page after page. 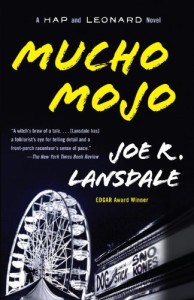 That said, this book definitely isn’t for everyone. Hap’s first person voice is—I don’t know how else to say it—very masculine. A white day laborer who spent time in prison as a conscientious objector to Vietnam, he admits—to himself and a woman he finds attractive—that he’s fueled by his adolescent hormones. (But both he and Leonard describe this pattern of behavior in much more colorful language.)

His best friend Leonard is a Vietnam veteran, a large black man who happens to be homosexual (did I mention this is East Texas in the 1980s?) but is politically pretty conservative. When Leonard inherits a rundown place next to a hopping crack house, things start getting interesting. And violent. Characters argue over sex and race and religion and poverty and everything in between, using words and ideas that blow past politically correct to downright offensive. Their actions range from heinous to ludicrous to downright sublime. But they come from a true place, and the mixture of dark and nasty and kind and faithful, with humor in the face of it all, feels real to me. 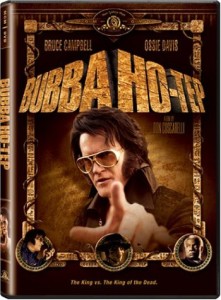 There’s nothing quite like stumbling across a book, finding that this writer speaks to me, and then discovering in your quick bout of mini-stalking that he or she has a pile of books just waiting for you, preferably featuring the same characters. Imagine my Happy Reader Dance (the Happy Writer Dance in mirror image, minus the carpal tunnel hand jive) at discovering Mr. Lansdale has a huge body of work. He’s written just under a dozen Hap and Leonard adventures, and additional dozens of novels and novellas and short stories in multiple genres (having won an Edgar Award and eight Bram Stoker awards). And he wrote the novella Bubba Ho-Tep! (The movie adaptation is a must-see for any Bruce Campbell or absurd mummy fans.)

But if you’re hoping to check him out at your local library, you may have to act fast. The Sundance Network is producing a TV series featuring Hap and Leonard, so I’d expect a run on the books soon (especially with James Purefoy and Michael Kenneth Williams cast as the leads). By the way, according to The Hollywood Reporter, 1980s East Texas is a period drama. Yeah, that’s not depressing.