As frenetic as the energy can be leading up to the Christmas holiday, I love the days afterward when everything seems to slow down. (Except the hopping party at a neighbor’s house last night; the cops silenced their thumping bass just before 3 a.m.) I was apparently a very good girl this year because various Santas gave me a stack of yummy books I can’t wait to devour. I haven’t started them yet. First, because a library book demanded my attention, and second, because… I don’t know why. I’m a doofus. 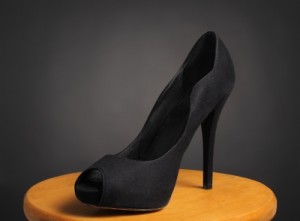 Or because I have a big editing itch now, the kind a cream from the pharmacy won’t cure. I’m adding a chunk here and subtracting a chunk there and making sure the pieces fit and the broccoli is lean. I know that makes no sense; insert something about trimming the fat from the prose or some such. [Aside: as vegetarians, we always joke about living high on the broccoli—instead of hog, for those who’ve never been south of the Mason Dixon.] Some of the changes seem so simple, and yet take so long. For example, hypothetically maybe you have an issue with shoe consistency (not that your own are lumpy, but that your heroine wears different ones at different times). So you go through and figure out what shoes she should be wearing and when and why (because believe it or not, this can have serious action scene implications). And then you go through and find every place you’ve mentioned her shoes, or her shoe, or her sneaker + s, or boot + s, or flip-flop + s, or maybe (no hyphen) flip flop + s, and what other words are there for footwear? and hours later you’re thinking—Dammit! Why can’t all you people on the Mainland just wear slippers like we do?!! (Slippers being the Hawaiian term for flip-flops, the default shoe in the islands, not the “my feet are cold and/or geriatric” footwear.) 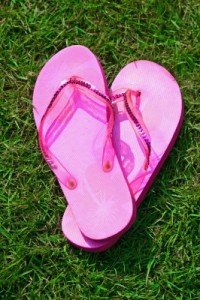 Anyway, despite this brain agitation, I think I could lose myself in someone else’s fiction if I could just figure out a name for my own. Yep, that’s right. The one thing Santa didn’t bring me was a title for the Panacea novel. I still can’t decide. I think I need a dartboard. Or a Wheel of Titles. (That would be almost as cool a gift as my fancy metal WRI-TER bookends—Booya!) Wasn’t one of those classic stop-motion Rudolph movies about the Baby New Year, and maybe a condor? [Wikipedia tells me it was a vulture in Rudolph’s Shiny New Year. And I’m worried about my title.] Here’s hoping the New Year’s Baby Monster Thing will bring me a shiny new title in a few days. Otherwise, I’m downloading an app.

[“Stiletto Shoe” by Boaz Yiftach and “Flip Flops” by James Barker on freedigitalphotos.net]