I planned my blog post yesterday, but got caught up in writing writing instead (things are getting real in Dead Hollow) and left it until this morning to draft. Except today I’m a little frazzled because—you guessed it—we had intense thunderstorms and a trembling, medicated Rhodesian ridgeback (plus a totally chill cat) in our bed last night. 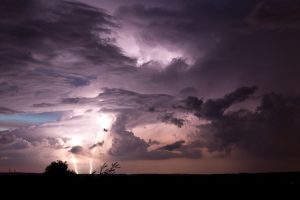 I was going to write about how I can’t get anything done because of the trouble-inciting Ninja Kitty. Except today, it struck me that the weather is the root of my problem. When we moved to Hawaii a dozen years ago, thunderstorms were rare, with maybe a handful of storms in as many years. (We’ve always had a crazy storm dog, including a terrier who broke a toilet, so it’s not that I’m more vigilant now.) For the past six months, I feel like thunderstorms have been ruling my life. And the weather forecasts are completely unreliable. Not a single zig-zaggy line for the four hours of thunderstorms last night, but they’re projected to start again soon and last all afternoon, so hopefully that bit will be unreliable as well.

So I’m mulling this in bed this morning, wondering if I’ll be able to stand after I unwind my body from the dog and cat, when I recall seeing something about the Pineapple Express recently. What is that? And does it have anything to do with our crazy weather? (Short answer, not really.)

Although it sounds like a kids’ movie (it is a movie about a strain of pot, more properly pakalolo in Hawaii), Pineapple Express refers to a meteorological phenomenon, an atmospheric river that flows from Hawaii to the west coast of the United States. The Pineapple Express can cause torrential rain in California, as it did last week. Isn’t it strange to think of exporting your weather to someone else? On the mainland, my recollection is that winter misery was generally blamed on Canada, presumably because Canadians are too nice to take it personally.

By the way, I adore this definition of precipitable water from Weather Nation: “[A]n estimate of how much water would be present if you could snap your fingers and turn all of the water vapor in the column of air above your head into liquid.” Don’t you wish you could do that? Once… 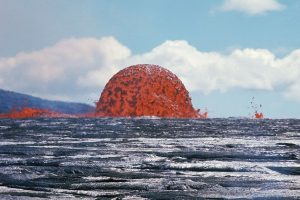 While looking up the Pineapple Express, I stumbled on this crazy picture the USGS took of a lava dome at Kilauea in 1969. Which reminded me of the landspouts we had there a couple of weeks ago associated with the high winds I mentioned last blog post. (Here’s a short article and video if you missed my Facebook Post.)

Do you see what’s happened here? I’ve been afflicted by Shiny Object Syndrome. As a writer (and a human being), I consider SOS both my greatest weakness—my kryptonite, if you will—and my greatest superpower. I’m particularly vulnerable to it when I’m sleep-deprived, wanting to be doing something else (like wrapping up a book), and it’s Friday. Or Monday. One could argue SOS is the reason I have so much student loan debt and so many letters after my name. (I prefer the term intellectual curiosity.) It’s the reason I enjoy caffeine-fueled conversations about random things, and harass my husband mercilessly while reading my Twitter feed. Capybaras! Ctenophores! Keld! (Word of the day.)

SOS is also one reason I occasionally spend hours and hours on a short snippet of a scene. This morning when I opened my browser, there were seven tabs remaining from yesterday’s air ambulance and trauma scoring wormhole. (And last night, I decided I probably won’t use any of it.) But it’s also the reason that short snippet of scene will have the ring of authenticity. I hope. 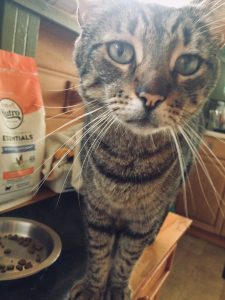 Okay, so maybe I can’t always blame the cat for my perpetually-brimming To Do List.

But for the record, he did mewl his way in and out of the house demanding food and/or recognition and/or homage five times while I typed and uploaded this post.

And once he was wet.