And happy end-of-another-week-you-survived to everyone else!

I know many of you haven’t left the house in a VERY. LONG. TIME. I feel you. Quarantine sucks. But it beats the alternative.

As I mentioned to my newsletter folks, I’ve been fighting a little something for a while. (Something flu-like, not grizzly-like.) That’s means, in an abundance of caution, the only time I’ve seen paved road in weeks is when we took our poor dog Travis for The Final Vet Visit. (He passed in the car on the way, so I barely set foot in the parking lot.)

My husband and I feel so fortunate because, unlike many of you, we don’t live in an apartment. We can’t see our neighbors (though we can hear them), and we can go outside when it’s not dumping rain. If we’re desperate enough, even when it is. 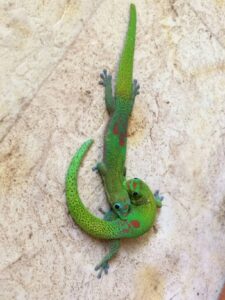 I’ll do another post soon with pictures of Outside, just to prove to some of you poor souls that it’s still there. But first, I want to remind you that sometimes the Outside is kind enough to visit Inside.

Here in rainy east Hawaii, we have a ton of anoles and geckos everywhere, inside and out. The geckos are the gorgeous gold dust kind, so they get all the love. Except when they relocate their poop spots for no apparent reason and make a mess of things. Or when they get crazy noisy and randomly fall from the sky during the Mad Days of Gecko Loving.

Geckos also have personality, so much so that individuals become recognizable by the way they turn their heads when they watch you, whether they run or give you stink-eye or lick honey from your finger.

That said, I really have a soft spot for the anoles, too, and not just because they don’t leave eggs in boxes of tea bags or in my baseball cap.

Maybe it’s my love of the underdog.

Life seems so much more difficult for anoles. They’re slower, less resilient, and they don’t have magic hairy feet that stick to walls with van der Waals forces.

Less cool is that Ninja Kitty occasionally brings me one—alive—as a toy. Often minus a bit of tail.

I try to repatriate the buggers to the Outside World, but that is sometimes easier said than done. One was living in the blinds next to my desk recently for at least a week, and I have to say, it had a gecko-sized personality. We were having an extended cool and rainy spell, and it started venturing onto my desk, I suspect because the router generated heat. (It certainly wasn’t generating internet.)

I thought I’d share a few highlights from a particularly interactive afternoon with you.

I can’t fault his taste in books. 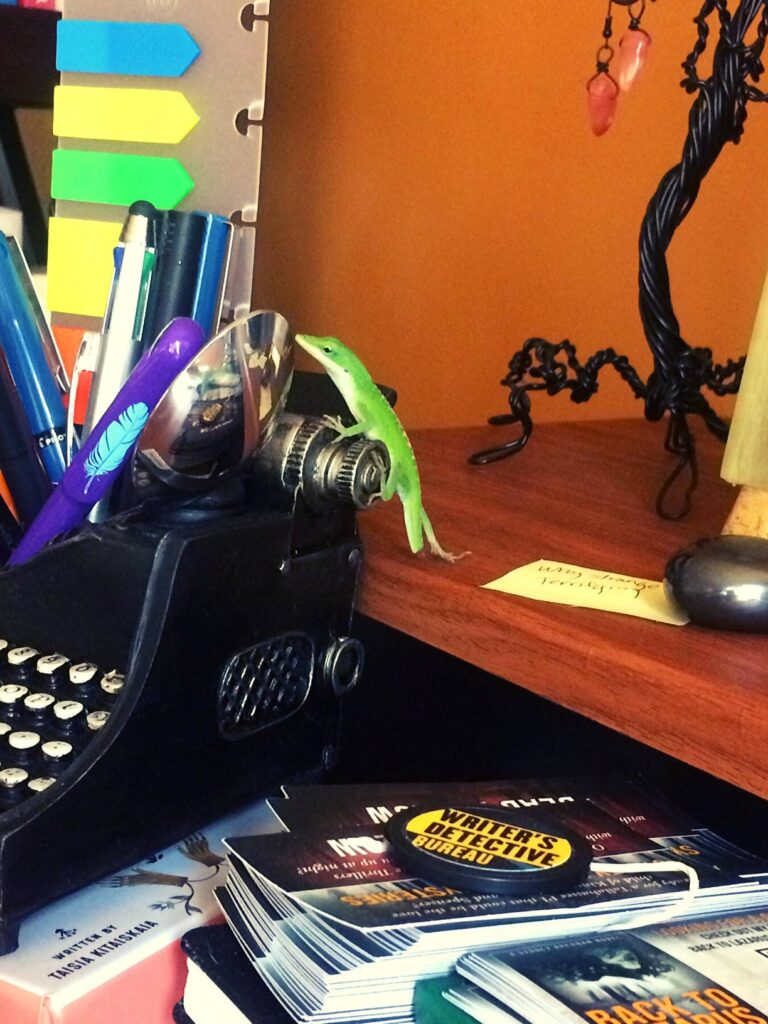 I forget–do I write with blue or black ink? 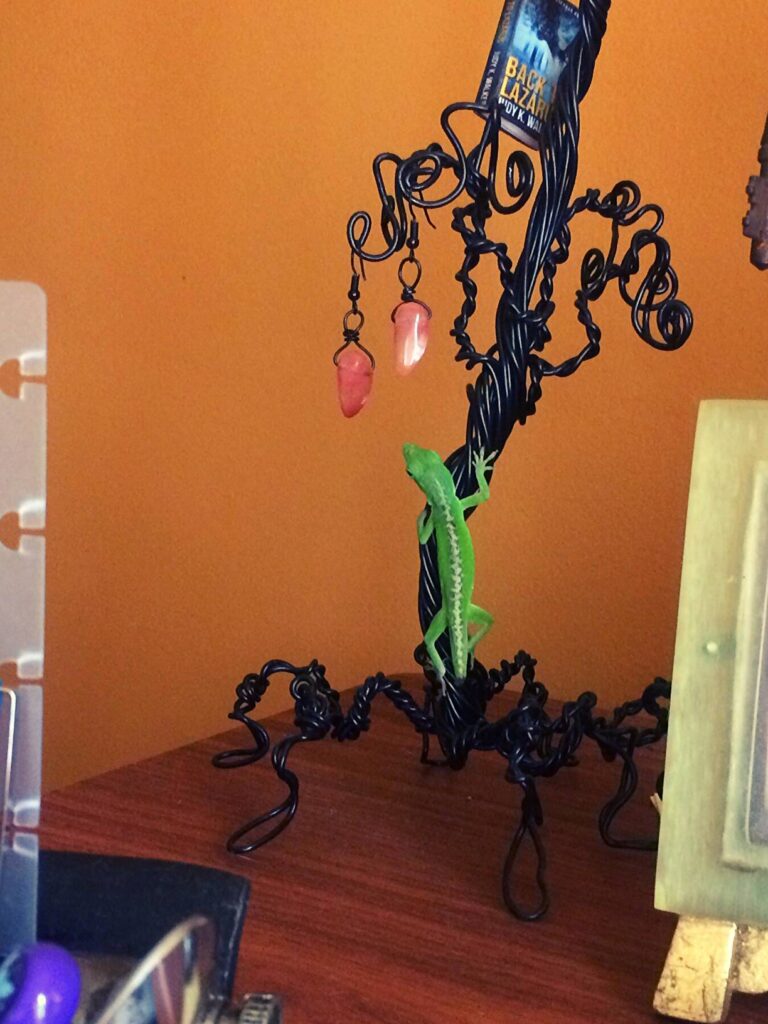 Not the type of tree I typically climb, but since it’s here 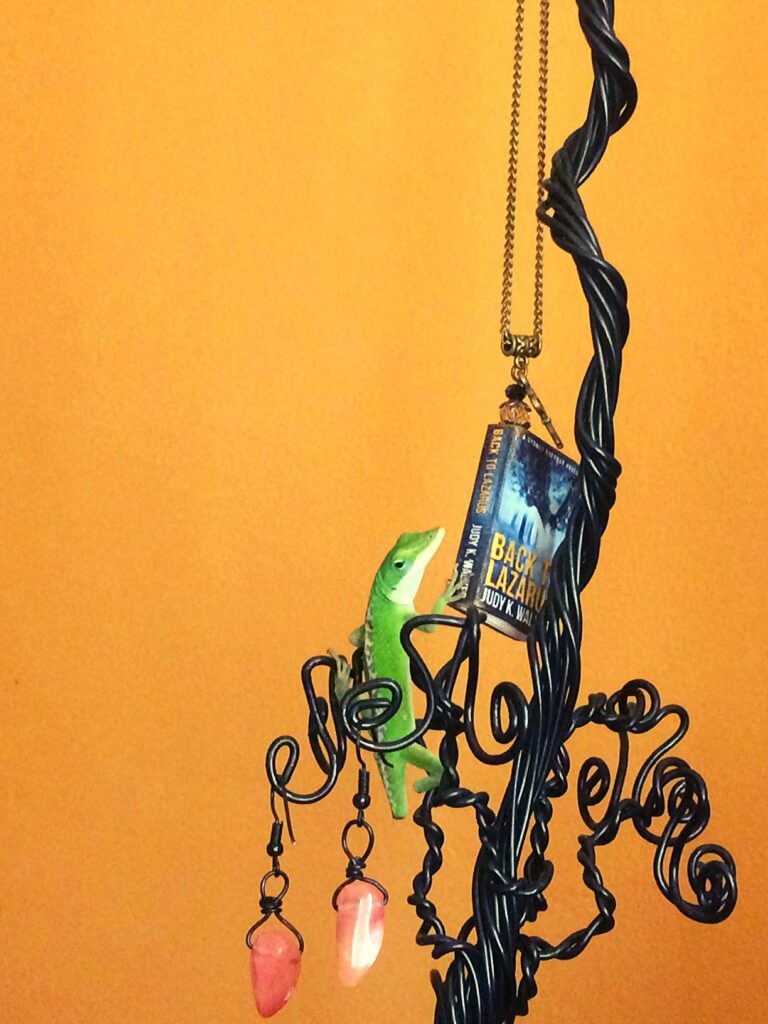 Hey, I’ve heard of this author! 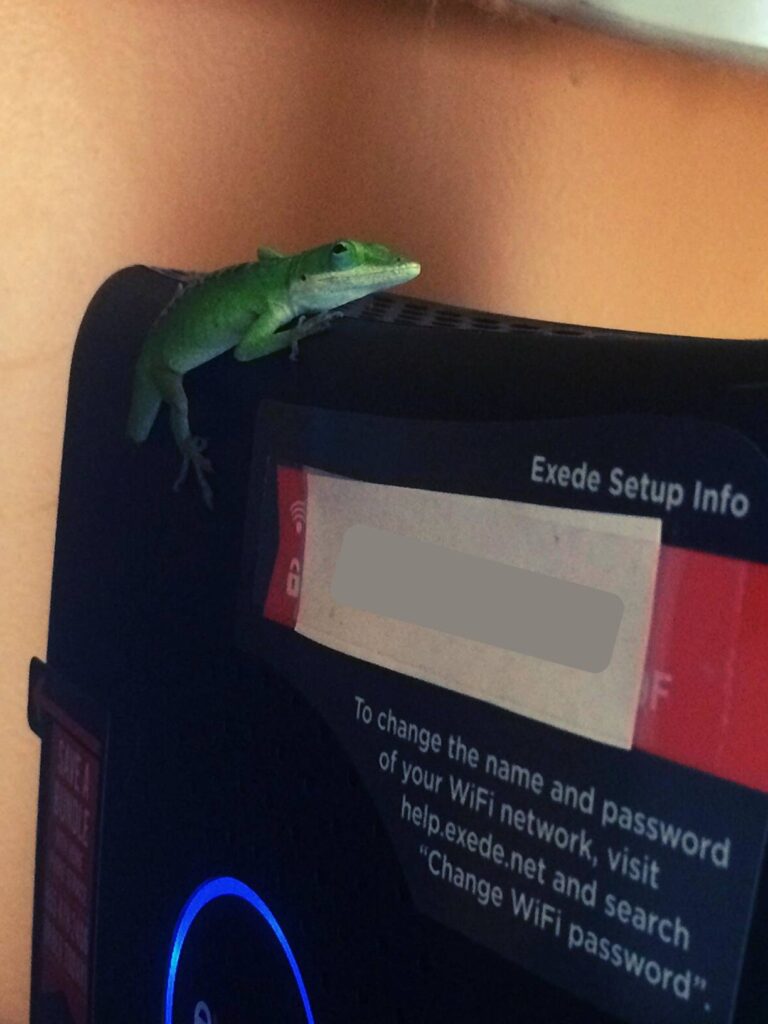 Oh yeah, baby! This is where the power is.

My writing buddy really kicked into collaborative mode after chilling on the router for a few minutes, which you can see in the video evidence below. (Apologies on the video quality; it got shakier when I cropped the phone video of the little slippy-slidey bugger.)

And for those who get squeamish around lizards, at least it wasn’t a roach! 😂