This week… yeah. Wow. I generally don’t talk politics on the blog, and I won’t start today, but not acknowledging that this has been a momentous week would be dishonest. Whether you’re elated or devastated or somewhere in between, I suspect many if not all of us are feeling pretty wrung out by the past year, coupled with the release of a burden being lifted. Since I’m being honest, I’ll share that I figure every day this week I managed to put on pants (albeit yoga pants) and not put vodka on my cereal or eat grass (wait—the dogs do that) was a good day. Obviously we don’t all share the same views, and as I’ve gone to the post office or the grocery store or wherever (but not the liquor store), I’ve been trying to leave a little extra space for people to do whatever they need to do as we reach equilibrium. At the risk of sounding like Gandhi making an appearance in a Hill Street Blues episode, Let’s be kind to each other out there, people.

That out of the way, I did get an early draft of Prodigal off to the developmental editor this week, and I’m starting on beats (something like a loose outline the way I do them, just laying out the high points) for the second book. I think most of the work with my developmental editor will be structural, trying to ensure I’ve done everything I can to give you guys the most exciting read possible. It’ll definitely be a different experience from a Sydney Brennan book. For example, Sydney’s books are longer than I anticipate the Dead Hollow books being (Braving the Boneyard is the longest Sydney book, at a whopping 127,000 words, and at this point, Prodigal is just under 95,000 words). Syd’s book chapters tend to be the same length (around 2,000 words), while Prodigal’s chapters rarely go that long and range all over the place. And, as I’ve mentioned before, Sydney’s books are in her first person point of view, while the Dead Hollow books are in multiple third person points of views (there are no Is in Dead Hollow). In front of the last of the avocados, which we ate a couple of weeks ago

Like many writers, I sometimes have little tricks to get my brain in gear and make sure it knows where we’re headed. For the Dead Hollow books, I’ve dusted off an old mug I found in a Salvation Army shop while looking at used books. I cannot imagine how a West Virginia tourist mug made it all the way across the Pacific to Hilo, Hawaii, intact. But since Dead Hollow is a fictional Appalachian place and the fall cabin on the mug could have been lifted from Prodigal’s pages (not to mention I’m incapable of writing or otherwise functioning without morning coffee), it seemed like a good fit.

I came across another serendipitous writing aid recently. On November 1st, I flipped over the page on my Nature Conservancy calendar and thought, wow, that’s pretty. That could be West Virginia. Except there was an inset photo of a cute little bear creature that looked like it belonged in South America somewhere (if not Middle Earth), so it couldn’t be West Virginia. Did I mention my eyes have been locked on my laptop screen for the past couple of months? Well, nearly a week into the month, I glanced over, did a double-take and actually read the caption: Panther Knob Preserve, West Virginia, USA. Duh! I actually have photos from Panther Knob on my Dead Hollow Pinterest Board (sorry, still secret). I guess I better get writing on Book 2 while the inspiration is still hanging in front of me. By the way, the magical creature is a fisher. I’ll have to ask around, but I don’t know anyone who’s actually seen one where I grew up in West-by-God-Virginia. 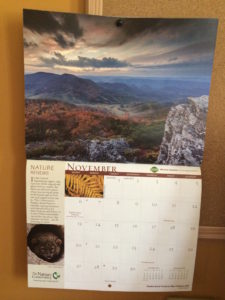 I’ll update you with any fisher information, just as I have a brief update on last week’s Post-Performance Funk, where I talked about the letdown after finishing big projects, using the example of a concert in high school. When I talked to my mom over the weekend (hi, Mom!), she said she’d read my blog post, and the first thing she thought of was us hitting the deer. Yes, hitting the deer. Let me first say, there are shit-tons of deer where I grew up (that’s an official Department of Natural Resources unit of measure), so seeing one on the road is like breathing air, and nearly hitting one is not uncommon. But you’d think I’d remember actually hitting one. (Not counting the infamous story of a deer strike I was too young to personally remember, but have had drilled into my memory banks.) But then I did remember the incident she was talking about, specifically that I was lying down and slid/flew off the back seat onto the car floor when Mom hit the brakes. There was definite contact between the two, but the deer didn’t seem to be hurt (just a bad-ass story for its friends), and there was no damage to the car. (Nice braking, Mom.) But until Mom reminded me, I had not made the connection between the two–that we’d hit a deer on our way home from the Region Band concert.

Memory is a funny thing. See, there’s a reason the Buffett Bard calls them Semi-True Stories. 😉