Today, I thought I’d tell you a little story, hopefully one I haven’t told you before. As with all my stories about anything that happened longer ago than yesterday, it comes with the Jimmy Buffett caveat, it’s “A Semi-True Story.” In other words, the years tend to make for a better story, but the accuracy of the details tends to suffer. 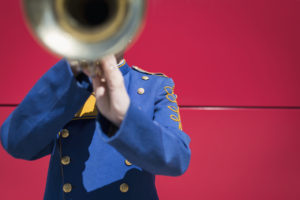 I was in Band growing up, the kind with polyester uniforms, halftime shows, and folding chairs, not the kind with groupies, torn clothes (except once, in a wardrobe malfunction, my polyester pants), and screaming fans. It began when we gathered in the gym in fourth or fifth grade and the eighth graders had set up stations for the younger kids to try out their instruments. (I believe that gymnasium later underwent asbestos remediation, so clarinet cooties were the least of our health concerns.) I ended up playing the oboe, I suspect because I was the only person who could get a sound out of the double-reed instrument. In the hands of a ten-year-old, that reed is like a call for extinct beasts. Bless my mother, if there were any dinosaurs left, pterodactyls and pteranodons would have swooped down upon our home every time I practiced.

When I reached junior high and marching band, I discovered that not only is most marching music not written with oboes in mind (shocker!), but marching and playing without snagging that delicate double reed between your teeth takes more coordination than I possess. My brilliant band director’s solution: alto saxophone. I loved the alto sax for the pure fun of it. You only needed to know about four notes to belt out a passable imitation of the You Belong to the City solo (wonderful Miami Vice cheese), heady stuff for someone stuck sitting next to the flutes for a couple of years. (No offense, flautists.)

I was an okay sax player, but Kenny G wasn’t exactly knocking down my door. (Remember, late 80s.) For me to experience the annual Regional Band Festival, my band director and I faced a conundrum. Unlike the All-State band, you didn’t have to audition, but there weren’t many available spots for alto saxophones, and they were very competitive. My oboe skills were rusty, and they only needed two oboists at most. Clarinet, on the other hand… there were a lot of chairs for clarinet. Too bad I didn’t know how to play the clarinet… And that’s how I ended up performing in Region Band on an instrument I’d only been playing for about a month. 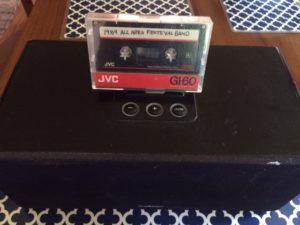 I can’t imagine why this won’t play

Again, semi-true story, so it may have been a little longer, or it may have even been a little less. The Concert Band met at a college performance hall an hour or so away, and we had a couple of days to learn a pile of music that ranged from pop to classical, style-rich to technique-heavy. It was intense and like nothing I’d ever experienced before, which is probably why I still have a handful of vivid memories: my first middle C, when the director tuned the band individually (unlike the girl next to me, thank God I was in the right neighborhood); the smell and metal-hawking sound of the trumpets next to me perpetually blowing spit from their valves; the clothes I wore the first day (WV Mountaineer bowl game T-shirt and acid-washed jeans with legs that tapered, but not nearly so bad as today’s skinny jeans); and the feeling of a totally blown out embouchure, with sore, red lips that begged no more. I can’t play the concert from memory, but I can still replay most of it in my mind. The cassette of the performance is one of those things I’d really like to digitize. It includes a squeak during the relentless tu-tuku-tu—tuku-tu of (I think) MacBeth that was either me or the girl next to me; I’m unwilling to commit to either at this point.

I’ll be honest, part of the intensity was becoming instant besties with the first chair trumpet players to my left, who, in addition to being amazing musicians, were irreverent, funny, and, oh yeah—boys. (I was fifteen at the time.) And part of it was being surrounded (mostly) by people who’d rather be there than anywhere else even though it was hard, and alongside them, pushing myself to do something I’d never done before, to be better than I’d ever been.

Squeak or not, afterwards I felt pretty jazzed (sorry—couldn’t resist), as did everyone else. Of course, it didn’t take long for the reality to set in: that it was done, and that I’d never see these people again. My deep funk lasted a lot longer than the car ride home.

I’m sharing, not so you can add to your making-of-an-author psychoanalyst’s file, but because that’s how I felt this weekend after finishing the rough draft of Prodigal. My husband kept telling me on Sunday to do something to celebrate, but all I could manage was dragging my butt around the house, looking over my shoulder mournfully at my laptop. I desperately wanted to start my edits, but knew I should take one day off after six weeks of solid writing. My mood did improve Monday afternoon when I dug back in to edit, but I really think I’m one of those weirdos that gets depressed rather than excited when she finishes a rough draft.

Fortunately, I plan to send Prodigal off to my developmental editor in a few days. I guess then the remedy for my funk will be to start Book 2. 😉