You know how you’re standing in line behind someone at the post office, or maybe waiting for an appointment, or for someone to serve your beverage of choice, and you overhear a story that ends something along the lines of, I’m telling you, you can’t make this shit up. Well, just in case you’ve never had the experience… 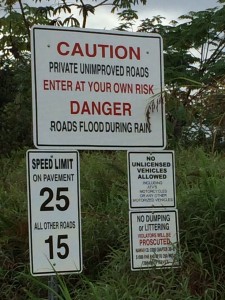 I’ve shared before that rural east Hawaii has a hint of Wild West flavor. We live in a development (using the term loosely) where everyone is on catchment water (i.e., if it doesn’t rain, you don’t shower), where electricity poles run down the streets but not necessarily to individual houses (we are totally off the grid, so HELCO can kiss our shiny solar panels), and where the roads are privately maintained (again, using maintained loosely) through the payment of road fees. (By the way, that’s an old picture of our road sign; it has since been struck by a very large vehicle and I would no longer describe it as “upright.” Also, for a while, our Stop sign was four feet tall.) I’d mentioned last year (Magpie Moments: Using the Whole Road) that our community association meetings are the stuff of legend, with regular attempts at intimidation and threats of violence. I’ve actually never been to one because I prefer my crazy people to stay on the page. And also, I wouldn’t be sure which meeting to go attend.

What’s that, you say… which meeting? It seems we have two Boards of Directors, each claiming the other is an imposter. And unlike superhero movies, neither one is considerate enough to wear dark costumes or crazy eyebrows. We recently received—not for the first time—two newsletters from the two different Boards of Directors, with two different logos. They meet in different locations on different nights. (Members of one group were allegedly banned from two meeting halls in the area after physical assaults.) During this battle, our community association’s Post Office Box and bank accounts at three different banks have been frozen, but apparently the PO Box is now accessible to one group and one of the bank accounts is accessible to the other group. (You really need one of those logic puzzle grids to keep it all straight.) Also, the PO Box group have sued the other group and asked that the association be placed in receivership, and they allege that the unlicensed contractor who resurfaced our few paved roads is being prosecuted. (I’d prosecute him if doing a lousy job is a criminal offense; each time it rains we get another pothole, and in Lower Puna that’s about once every thirty-seven minutes.) Plus there are allegations of other shady expenditures and shenanigans. (Sorry, I just really wanted to use the word shenanigans in a blog post.)

Yes, I could not make this up.

Well, maybe I could, but I didn’t. Feel free to use it in your own writing. See, I’m not just sharing our community association dysfunction to take the shiny edge off living in Paradise as you Northern Hemispherists enter winter. I’m also sharing to demonstrate that there is all kind of crazy in the world, and your next story idea is as close as your mailbox (or inbox). See, a novel isn’t a product of having the perfect idea; it’s a product of dedication and actual butt-in-chair time. And in case you haven’t looked at your calendar, it’s almost November, which means… 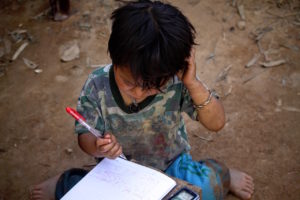 NaNoWriMo! Also known as National Novel Writing Month, when writers from all over the world—both amateur and professional—come together with the goal of writing a 50,000-word novel in thirty days. You can set a more modest goal as well. The point is to do something creative and life-enriching in a supportive environment. And when I say supportive, I don’t just mean people who nod and say uh-huh in the right places; I mean people who will give you a kick in the pants when you need it. (For me, that would be every day at 1:16 p.m., and various other times TBD.) You can join Facebook groups, library groups, coffeehouse groups, etc., or just pull up the NaNoWriMo map once in a while and get the warm and fuzzies without actually having to interact with other humans. 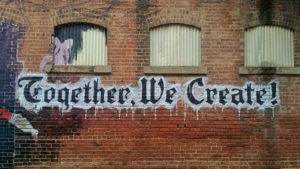 Although I am a NaNoWriMo evangelist, I’ve (gasp!) never done it myself. I toyed with the idea of writing Dead Hollow Book 2 for this year’s NaNo, but I have to do some work on Book 1 and get it off to my developmental editor first. Still, I’m hoping to get a good chunk of Book 2 written in November. So, at the risk of sounding 50 Shades, what do you say to some rough draft bonding? You have nothing to lose. Writer’s PSA: Except your manuscript if you don’t back up, so safe saving, people!

[Puna, Hawaii, road sign by Paul Normann; Boy writing by Tien Tran and Together We Create mural by My Life Through a Lens, both from stocksnap.io]