Last week, in addition to eating yummy foods we usually don’t take the time to fix (mmm… gravy), my husband and I indulged in another Thanksgiving tradition. Almost every year for—let’s just say a lot of years—we’ve watched the same movie. (I even stuffed it in my suitcase when an earthquake sent us to England during the month of November, but that’s a story for another time.) And it never gets old… 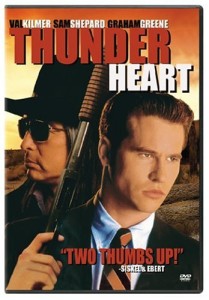 Thunderheart is the story of a gung-ho FBI agent, Raymond Levoi (Val Kilmer), assigned to investigate a murder on a Native American Reservation in South Dakota. Tensions on the reservation are running high, and Levoi is sent there as part of a Sensitive Operations Unit because his biological father (a man he notes at every opportunity he can’t remember) was half Sioux. Levoi soon learns that “Sensitive Operations” is an understatement, and nothing is as it seems on the reservation…

This movie has so much going on, on so many levels. Released in 1992 but set closer to 1980, it’s a time capsule (check out the RayBans and push-button radio in the early minutes) with a historical/political edge. According to the opening titles, the story was inspired by events that took place on Native American reservations in the 1970s. In fact, director Michael Apted released a documentary about Leonard Peltier and the events at Wounded Knee (Incident at Oglala) the same year he released Thunderheart. (If you want to fall down a 700-page rabbit hole about all the craziness that was going down then, I’d recommend Peter Matthiessen’s In the Spirit of Crazy Horse.)

It’s also a murder mystery that opens with one of the most hauntingly beautiful shots of a man being killed I’ve ever seen. I know that sounds wrong, but it’s true. (Much of the movie, filmed on location in the Badlands, is stunning in its gorgeous desolation.) The murder investigation is influenced by so many secret agendas, from the multiple government agencies with overlapping jurisdictions to the tribal groups with radically different agendas, that it could give House of Cards a run for its money.

In addition to being a thriller, Thunderheart is a classic hero’s journey of transformation as Levoi comes to terms with the past he’s always denied and a culture he’s never known. But for me, it works best as a heavy-on-the-drama buddy movie. Levoi is assigned to assist legendary veteran FBI agent Frank Coutelle (Sam Shepard). The two agents have a—let’s say strained—meeting with tribal police officer Walter Crow Horse (Graham Greene) when they go to examine the crime scene. The relationship that develops between Levoi and Crow Horse is why I watch the movie year after year. The chemistry between Kilmer and Greene is just so good. They trade insults (and rude hand gestures) like teenaged boys. Or, as frustrated tribal elder (okay, “medicine man”) Grandpa Reaches says:

Walter Crow Horse: Yeah, only when he’s really pissed off.

But they also have each other’s backs and, like any good relationship, together they’re greater than the sum of their parts.

I’ll be honest—there are a few moments of cheesy dialogue. But Apted was lucky enough to have actors who can pull the script off 99% of the time. I could go on and on about Kilmer and Greene, but the movie is full of solid performances, some of them by non-professional actors. (I don’t know if the three-legged dog was a professional or not, but if he’s not, he should be.) Shelia Tousey’s portrayal of schoolteacher/activist Maggie Eagle Bear is also excellent. She’s a key player in an intense sequence of events, marking the turning point in the first act of the movie, that gets to me every time. An otherwise strong character, her vulnerability in that scene is so genuine, it’s heartbreaking. Come to think of it, she may be in the turning point of the second act as well…

In the end, I can forgive Thunderheart for the occasional bit of corny dialogue or feeling of slight heavy-handedness (I know—oxymoron alert!) because those are moments when it tried too hard. And really, as readers and viewers, how lucky would we be if that were the worst thing we could say about all stories?