This week’s blog post is a quick (or at least somewhat scattered) combination rave and rant. The rave is me sharing a show I’ve been enjoying lately. As for the rant, you may remember a post a while back on things that can jolt you out of a story (How Factual Do You Want Your Fiction?). This week I stumbled upon another very specific story jolter, and I thought I’d share.

A lot of people claim we’re in a Golden Age of TV, and there do seem to be a lot of quality shows on television now. I don’t have cable or streaming or an implant or whatever everyone else is using to consume entertainment now; I’m still kicking it old school with DVDs, often from our local library (communist old school?). That means I don’t have everything on demand, at my fingertips at all times. Often I’ll hear enough good stuff about a show (say, Vera, a Story I Love) for long enough that I decide, OK, let us start the journey of requesting the same show everyone else in Hawaii wants to see. And waiting. Other times, I’m slow enough that I’ll stumble across something on the shelves, years after everyone else has watched it. Several weeks ago, I did this when I saw Homeland waiting to be checked out. 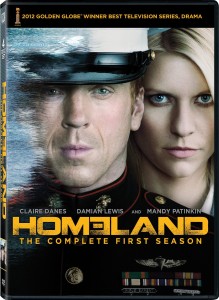 For those of you who aren’t familiar with Homeland, Claire Danes delivers an amazing performance as female CIA agent Carrie Mathison, obsessively pursuing a rescued Marine POW—a war hero—that she believes to be working for Al Qaeda. To be honest, I was wary of watching a show about domestic terrorism by the producers of 24, but I’ve really been impressed by it. There are so many layers, to the plot and the characters, that are slowly revealed while still delivering a fast-paced, suspenseful narrative (that is not a torture-fest, which is my impression of 24). I mentioned Claire Danes, but the rest of the performances are also superb, especially Damian Lewis as the rescued POW and Mandy Patinkin as the CIA agent’s mentor. (I do not want to meet any person who does not love the man who played Inigo Montoya; live is too short for people like that.)

Another of the things I like about the show is that it has a sense of realism. By that, I don’t mean that I think this is what it’s really like in the CIA post-9/11, but that it feels like what it could be like. Not a lot of things happen that pull you out of watching the show to cough <bullshit> under your breath. The writers did something brilliant by giving agent Carrie Mathison a mood disorder. Once you get past the fact that she’s worked for the CIA for a decade without them figuring out she has a clinical diagnosis, this allows for all kinds of crazy things to happen without it feeling contrived. It also adds more layers of suspense—will the CIA find out her secret? And are her ideas about the war hero as crazy as she may be?

So where’s the rant? After checking out Season One multiple times (and paying enough library fines to buy popcorn and Junior Mints), I finally watched the season finale this week. Don’t worry—I’ll do my best to share while giving at most a very mild spoiler just in case you’re also five years behind in your TV watching. At the end of the episode, Carrie is undergoing something that may cause short-term memory loss (usually not permanent) as a side effect. Without giving more detail, this is a completely reasonable (verging on inevitable) turn in our story. But then, just as this process gets underway, Carrie has an epiphany, making a crucial connection between something she witnessed a while back and something she’s just learned. She mumbles the epiphany, says not to let her forget, and the treatment begins. Of course, no one can make out the words and they dismiss her rambling.

Seriously? After twelve episodes of exemplary, cutting-edge writing, they’re reverting to daytime soaps and playing the amnesia card? For those of you who never watched your babysitters’ soaps while pretending to play Legos, amnesia—convenient amnesia—was an epidemic medical condition in daytime television in the 80s. Anytime the writers had written themselves into a corner, or they wanted to pump the suspense back into a storyline and revive it for another few months, the hero or heroine had a car accident/fight/general head bump on the way to revealing the big secret to their lover/priest/local law enforcement. Still, those writers had to fill an hour a day, five days a week, fifty-two weeks a year, so you can give them a little leeway. But come on, Showtime in 2010—amnesia?

Here’s the thing. Again, it’s a good show and I don’t want to ruin the story for you, so I’ll just say they did a good job of making everything up to that point plausible enough and inevitable. I’d have done a head smack, but I would have been okay with Carrie having a realization and thinking it to herself as you watch her consciousness slip away. But an eye-popping epiphany shared out loud, ignored, and presumably lost? That’s just too much.

Don’t get me wrong—I’ll still watch the next season. Someday. Now that I’ve got the rant out of my system. (Thank you, by the way, for taking part.) In the meantime, I thought I’d share a scene from the inimitable 1991 farce Soapdish that popped into my head immediately after watching the Homeland finale. In it, a soap opera writer (played by Whoopi Goldberg) complains because she’s expected to write someone back into the story who was killed years before. But this wasn’t just a lost at sea kind of death; the guy was beheaded. “How am I supposed to write for a guy that doesn’t have a head?” Yeah, good luck with that…

So what are some of your storytelling pet peeves, the ones that make you throw down your (hopefully paper) book or click the remote in disgust? I’d love to hear them on my Facebook Page.