I’m not counting on many Americans reading this post the day it goes live. Most of you are probably either lying in a dark corner in a food coma, still reeling from overeating, or jacked up on adrenaline from elbowing little old ladies out of the way to grab the last [insert most popular item of the 2015 holiday season that will be forgotten by January 4, 2016]. Yes, boys and girls, it’s Black Friday, according to the History Channel not the day retailers traditionally finally go into the black, but the day lamented by Philadelphia cops in the 1950s who had to work extra hours to cover the shopping and traffic chaos that arrived ahead of the Army-Navy football game. Consider yourself edified, insofar as that as possible on the internet.

So what am I doing today? I am not suffering from a food coma (another perk of being a vegetarian; in addition to having fewer opportunities for food poisoning, it’s harder to eat so much heavy food you hate yourself the next day). I am not shopping, both because I’m avoiding supporting the retail machine (sorry, REI, it’s raining way too hard for me to #optoutside today) and because I’m not a masochist (notwithstanding my weakness for underdogs in sports and stories). Obviously, what I’m doing is typing this blog post. But I almost wasn’t. Don’t worry—I’m not delving into alternative universes and quantum physics. I’m just talking about the mini could-have-beens of life. I had another post partially written (a Stories I Love Thanksgiving tradition—you can look forward to it next Friday), but I decided to write about something else instead. And what was that? Oh, yes … it was about deciding.

There are many reasons I would not make a good president (as I get older, I seem to get less rather than more tolerant of certain types of stupidity), but perhaps the biggest is that I am not a good Decider. I hate making decisions! If you’ve ever taken a personality test (a real personality test, not one of those What Harry Potter character Are You? tests), you’ve probably found there are some things that really resonate and some that you’re like, meh. (It’s fun to take one in a group and then argue over what things are “right,” with friends tossing out some of your more charming quirks as proof.) For me, the combination of Intuition and Thinking and Perceiving (shout out to the Myers-Briggs fans) means I feel like I never have enough information to make a decision. On top of that, like many people regardless of personality type, I’m afraid of making a wrong decision. So I wiffle and waffle and I end up wasting time and mental energy that is better used elsewhere. 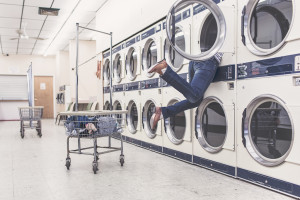 Sometimes the small, relatively unimportant decisions are the worst. I’ll use this morning as an example. I really need to do laundry. (Remember the Police song, Don’t Stand So Close to Me? Yeah, like that, minus the compromised educator ethics.) But because of other things going on, if I were going to the laundromat today, I would have to do it this morning. But morning is my prime writing time, and I was a naughty writer and haven’t finished today’s blog post. Maybe write while the clothes are drying and post at the library after? But it’s dumping rain, and I’d have to put all three dogs outside. (Formerly inside, as of this week Number One is also banished without supervision; story for another day.) We do have a big doghouse to keep them dry. But only one dog will use it. We also have an overhang. But the dogs might kill each other fighting for the prime top step location in front of the door. Black Friday might be an excellent day to have the laundromat to myself since they have nothing for sale there except Vitamin Water and Cheez-Its. But Number Three is still healing from some nasty sarcoma removals earlier this week. So here I sit, typing my blog instead of fighting for dryer space, after all that hemming and hawing. And yet I still have in the back of my mind, maybe if it stops raining… so long as I left by eleven… and on and on.

Of course, this isn’t always the case. I’m sure that we all have at least one area of our lives where we’re consistently in the zone, almost incapable of indecision. We’re simply able to get out of our own way, make a decision and move on to the next one, right or wrong. Maybe it’s in competitive sports or in the kitchen or playing an instrument or painting a canvas. We don’t stop and say, does this sky need cerulean or azure? It probably depends on the time of year and time of day. Plus the latitude. Maybe I should do some research… Hell, no! We slap some blue on there and move on, knowing that we can always paint over it. Because life is a series of do-overs (until it’s done). Whatever it is, we can always start over tomorrow. Or better yet, we can start over now. All we have to do is decide. 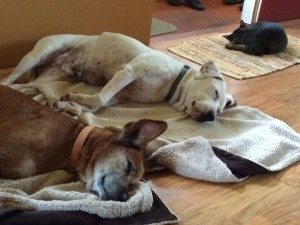 Besides, how could I make these guys move when they’re so comfy?

So I’m sitting here typing, no longer thinking about doing laundry. Next decision: work on my newsletter or Sydney’s novel? Well, it is the 27th, but I’ve got more creative juice for drafting in the morning… You know, it’s like dog training. These things don’t happen overnight.

[Laundromat by Ryan McGuire from stocksnap.io; cutest dogs ever by me]