It starts innocently enough. A little movement around the edge of the sink, maybe an impromptu gathering under your sponge? In a few hours, you go back and look. Hunh. Are you sure they were actually there? Maybe they’re just not active in the afternoon. Or perhaps you’re a little sleep-deprived thanks to a late-night allergy attack and have eyes full of floaters (you know, those little buggers that make you look back and forth, back and forth, and maybe swat if no one’s looking, trying to decide if you’re crazy or a bug-infested Pigpen).

But the signs mount.

You’re wakened in the night by an unpleasant piercing, burning sensation(is that a bite?) in your calf. Your pets scratch incessantly. Desperately. You see creeping movements inside the Nutella jar. And is the wood grain on your dining table… shifting? You look away, afraid you’ll be drawn into, what? Another world? Another dimension? Or just a more frightening version of this one?

Finally, you’re typing words that make your characters’ lives miserable (but your readers’ lives exciting) when a mark on your screen becomes distracting. Is that the ding from the laptop’s near-death experience of desk-flinging  by your dog? No, the spot is moving. Independently, with apparent agency, so it’s not a floater. It is an ant. You try to grab the tiny, malignant being, accidentally dislodging it from the screen. Where is it?? Not in the coffee cup… Not on your desk, or at least not visible on top of the Post-It layer.

Later, there’s a second one. You grab it and flick it away from your desk. Wait… won’t it just sneak up on you again from behind? Maybe climb your chair? And is that movement at the back edge of your desk, beneath the Post-It with the license plate numbers of vehicles doing suspicious things in your neighborhood. No… they’re back. The ants are back—ARGGHH!!

Okay, I don’t think the ants are back—not really back in a catastrophic way, that is. Most of the above was dramatized, although I did sneeze my brains out last night and I did—gasp!—physically remove two ants from my laptop yesterday. Long-time Blog followers may recall when my laptop was an ant death chamber (Welcomed Home by the Other Red Army), which was both terrifying and scarring.

I didn’t share this to boost local exterminator businesses (note to self/husband: call the exterminator before it’s too late). Instead, I’ve been reflecting on how often there are elements of horror in our everyday lives. I don’t specifically mean the easy button of politics, although I’m pretty sure no matter where we fall on the spectrum individually, we’ve all got something to be horrified about right now. I mean everything, all of the myriad, crazy things that can go wrong at any instant: gun violence, natural disasters, disease pandemics, water shortages… I’d go on, but some of you might feel like leaving the house this lifetime. 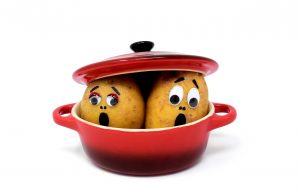 Not that horror has to be that dramatic. How about when you’re saving your current project and it “beachballs”—is your computer about to freeze or, worse yet, wipe out your entire project? Or you’re in a hurry so you snarf some leftovers from the fridge that might maybe be past their prime, then jump in your car, get up to highway speed, and feel a suspicious rumbling gurgle in your belly… mwah-ha-hah!

The first definition that comes up when you Google horror is “an intense feeling of fear, disgust, or shock.” So naturally horror fiction is geared toward generating that response in a reader. H.P. Lovecraft said, “The oldest and strongest emotion of mankind is fear, and the oldest and strongest kind of fear is fear of the unknown.” (From the the website Literary Terms, quoting his essay Supernatural Horror in Literature.) I love that idea of tapping into deep, juicy, archetypal stuff.

Of course, it’s likely the first thing that pops in your head when I say horror is Stephen King. For good reason; the man reigns. But have you done much book browsing lately? (I have a theory that every time Stephen King burps, Amazon adds a new subgenre.) Book genres seem to be all about getting in each other’s business, sliding and smearing and blurring, and horror is no exception. To be fair, thrillers have always included elements of horror—think of all the moments from Silence of the Lambs that gave you the heebie-jeebies—but I wouldn’t necessarily have browsed for thrillers in horror. Now, I’m not so sure, especially in the digital book ‘verse. 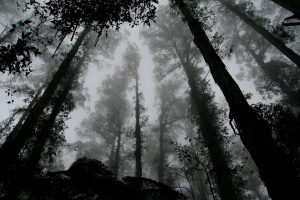 I’ve been mulling this because I’m struggling with marketing my Dead Hollow Appalachian thriller series, including getting it in the right categories. Keep it in straight crime thrillers (specifically kidnapping), and some people twitch because there’s a psychic. But even though the protagonist is psychic, the story is too realistic to fit very well in Psychic Suspense, where most of the covers feature attractive young women holding swords or flaming spheres. Believe it or not, I think there might be an argument for Horror. At least one of the Horror categories features a bunch of books I also see in Psychic Suspense.

What do you think, those of you who’ve read the Dead Hollow books, or even just seen the covers and blurbs—To Horror, or Not to Horror? Keeping in mind, of course, that Mr. King may have just eaten burritos, and tomorrow there could be another dozen or so categories to choose from.