[Rushes to microphone because if Dragon doesn’t fritz too much, it’s faster than typing.]

In my defense, I knew it was Friday a few hours ago, but then it slipped my mind beneath a cascade of urgent To Dos. And beneath the weight of lingering jet lag. I went to a writers’ conference in Austin over the weekend and returned Wednesday night. I’ll be honest—the travel part reminded me there’s a reason I don’t often leave “the rock.” 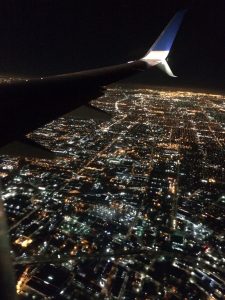 LA, as asleep as it ever gets…

I took a redeye flight to the mainland Saturday night, and one of my eyes remains red enough to shoot lasers or summon demons. To make the trip even more fun, I hadn’t realized beforehand that my flights were cobbled together from multiple airlines. Every time I changed planes, I had to go to another terminal and pass through Security again. Navigating across LAX from Terminal Two to Terminal Seven at five a.m. was almost enough to bring me to tears. Or screaming, apoplectic rage. Instead, I alternated between mumbling profanity under my breath (I hope) and repeating the mantra, this is the city that brought you Harry Bosch, to maintain the profanity volume at a mumbling level.

But it was worth it. Three days among so many creative people was invigorating, sometimes too much so. We were the rowdiest bunch of introverts you’ve ever heard! (Many people joked that this was their socializing for the year.) I averaged about three hours of sleep a night because our animated conversations kept carrying over into the wee hours. And the later I stayed up, the more my brain became convinced that of course I should be awake because I was still in Hawaii. (This time of year, midnight in Austin is eight p.m. in the islands.) An airport shuttle was scheduled to pick me up at five a.m. Wednesday morning, so Tuesday at midnight when someone began diagramming story structure approaches on a napkin, I said, “I’m sorry, but I can’t listen to this. If I start thinking, I’ll never get to sleep.” (I hadn’t packed yet, either.) Ha—nice try! On my way to the elevator I ran into another friend, went from a goodbye hug to an in-depth conversation about email lists… Did I say three hours? I might have exaggerated. 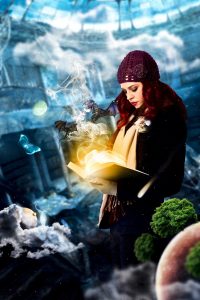 Conversations ranged from storytelling process (Plotter or Pantser? Scrivener or Word? Three Acts or Four? Character or Plot?) to genre conventions, from editing experiences to production models to marketing and even to—gasp!—our personal lives. The writers there came from all genres, with many writing in multiple genres. We often had different career goals and were at different stages in our careers, but we all had one thing in common: we love stories, and we love sharing them with our readers. (Okay, two things, but see above re jet lag.) And that’s what the conference was all about—making a living by making your readers happy. Because really, it doesn’t get any better than that. 🙂

I started this post by claiming I knew it was Friday a few hours ago, but it had since slipped my mind. What brought it back to mind was the closing of an email from one of my collaborators: Have a nice weekend! Hmm, weekend… so today = Friday. Cue flurry of activity. But wait, you say, one of your collaborators? Please indulge me as I do a brief tease. This morning I was distracted because I was working on a couple of projects with my cover designer. One will remain secret for now. Mwah-ha-ha! The other was the cover for—drumroll, please…

My first audiobook. And the collaborator who reminded me it was Friday was my narrator. We are in the final stages of production for the audiobook of Prodigal, Book One of the Dead Hollow trilogy. Woo hoo! Since it’s my first audiobook, I don’t have a good sense of how long the final stages and uploading to various platforms will take, but I’m guessing it will be available in about six weeks. I’ll keep you posted. In the meantime, I know what I’ll be doing this weekend—reviewing audio files! Happy Writer Dance! And hopefully very soon, some Happy Reader/Listener Dances. 🙂