As I confessed to folks in my Newsletter—which was sent a day late—this has been one of those sluggish weeks for me.

I am far too lethargic to saddle my words with extraneous letters (colour? really?), but the Brits have many other quirks of verbal expression worth adopting.

The word treacle comes to mind.

This has been a week of wading through treacle to get anything done.

(Doesn’t that sound so much nastier than warm and fuzzy molasses? Except—for the record—molasses will mold, i.e. get gray and fuzzy, if you live in a tropical climate. And it is not pretty.)

Standing at my keyboard, I had the intention of sharing a fun bit of armchair travel through space and time, until something else loomed into view. Well, next blog post…

That looming something else is the reason the pace has picked up lately, against my wishes and inertia—Hurricane Douglas is heading toward Hawaii. There’s a good chance it won’t really hit us, and even if it does, a good chance it will be substantially weakened by then and won’t cause significant damage. However…

Having been adjacent to, though thankfully not entirely hammered by, a fair number of natural disasters (multiple hurricanes, flooding, major earthquakes, and lava eruptions), and having friends and family with more direct experience of the same, the hubs and I have learned a few lessons.

Among these lessons: FEMA helps those who help themselves. Maybe. Eventually.

[Non-Americans and those from areas of the central U.S. that aren’t yet tornado or flood-prone, that’s a dig at the federal agency tasked with coordinating disaster response.]

In other words, it is always good to be prepared.

But it is not always easy. 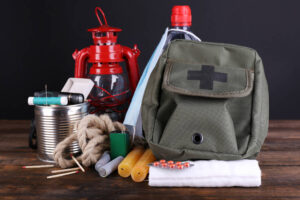 I tend to be a <ahem> relatively prepared person when it comes to regularly keeping supplies on hand, but living on an island means you can’t always get everything on your list when you leave the house. Covid adds boldface and neon green highlights to that fact of life.

I drove “into town” yesterday (remember, rural Hawaii) to fill in around the edges of our larder. (Larder feels like a Southernism, not a Britishism.) I was completely unsuccessful, at least so far as human provisions are concerned. I tried three major chain stores, couldn’t get a parking spot at the first, and couldn’t endure the massive outdoor lines at the other two. But the pet store was accessible, which means should the worst occur, the dog and cat will be eating kibble rather than eating humans.

Ninja Kitty would do it, too.

I’m happy to say I had much better luck today at the local health food store. Come what may, at least we will have a dragonfruit this weekend! How bad can the world be if you’re able to eat the most Dr. Seuss fruit ever? And I picked up my requests from the library. Priorities, people!

Now it’s time for all of the other nitpicky errands ahead of a major storm. Things like taking trash to the transfer station (we don’t have trash pickup here, but we/me do have a stellar husband). Making sure the dog has an adequate supply of drugs. (I don’t know who is looking out for the human pharmaceutical needs, but I did pick up a bottle of wine). Charging batteries ahead of the storm, and ahead of tomorrow’s outdoor prep, which may require some tree or branch (but not finger or hand) removal before securing anything else that might go airborne.

And so that’s where I’m headed. Soon. In my slow, slug-a-bug way. Right after I stop chuntering at y’all.

I’m pretty sure chuntering is a Britishism. Maybe I need some iced coffee first. Definitely coffee, not tea. 😉