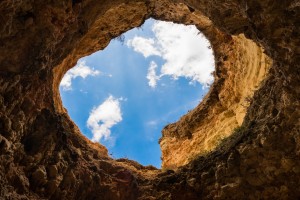 My husband and I had a bunch of holes dug a few months ago while we were getting some other things done on our property. “Dug” isn’t really the right verb, though. Not quite blasted—pile-driven? Our whole neighborhood rests on relatively recent lava flow with a thin veneer of cinder, the perfect habitat for native ohia trees and lots of non-native, invasive green crap. In other words, we don’t do a lot of “digging” around here. We’d already transplanted two trees we’ve had for several years—a bonsai (not intentionally, just stunted) avocado and an unidentified citrus (it’s never fruited and we can’t remember what is is). Over the weekend, we picked up a few more fruit trees to plant. (I don’t even know if I like kumquats, but the flowers smelled yummy and the little fruits just looked so darn cute!)

You would think planting a tree in a pre-dug/pile-driven hole would be easy-breezy. And you would be wrong. The area has no shade (thus planting trees) and the fine, black cinder gravel gets hot fast. Broken-up rocks had been shoved back in the holes, largely to prevent distracted writers from falling in while conversing with muses. Once those are removed, more “digging” is required to give the poor tree’s roots as much of a head start as is possible. Then you have to fill the hole with the lime and organic matter and nutrients you hauled over, of which our “soil” has none. To complicate matters, two of the holes were accidentally buried under a subsequent cinder delivery and leveling. With no Xs to mark the spots, we (by which I mean, mostly my husband) began by working out in lines from their two unburied neighbor holes with a shovel and a pick-axe. We eventually recognized the first buried hole by the pile of rock fill. The second hole, not so much. In fact, we never found it. There were broken rock chunks scattered all around the general area we expected the hole to be, as if a mythic beast had sprung from the passage in the dark of night. (And then covered the hole back up and leveled the cinder, because obviously it was a portal to another dimension that should not be disturbed.) My husband did the best he could to clear a space for the kumquat that was—we hope—hole-adjacent. (If our kumquat remains a bonsai, we’ll know our hope was ill-founded.) 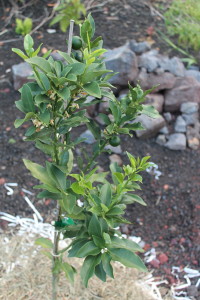 I won’t bore you with the details, but filling out the Story Grid spreadsheet to edit my latest novella was a similar process. Searching scenes for story events and value changes and other book-nerd bits sometimes felt like excavating without a map, or rather, excavating just so you can draw a map after you eventually find something. If you find something. A few of my scenes remained as indecipherable as that buried fruit tree hole, and I contented myself with knowing they didn’t work and guessing at what I’d been trying to accomplish. Finishing the spreadsheet helped give me the micro editing view. I’ve since completed the summary page that provides the macro editing (Shawn Coyne calls it the thirty thousand feet) view and have begun the actual edits. Huzzah!

I will share one random, non-Story Grid-type edit to to give you a sense of how my writing brain works. Or doesn’t, as the case may be. I mentioned last post that No Safe Winterport (working title, so feel free to drop me a line with mad inspiration) will feature Sydney’s sister, Lisa. I’ve been sharing brain space with Sydney off and on for about a decade, so I’m not sure when I named Lisa’s husband, but he’s always been Britt to me. The problem: Sydney’s ex-boyfriend in a previous novella, Secrets in Stockbridge, is named Bran. Seriously? What was I thinking? (It’s only just now writing this blog post that I’ve remembered I did know a Britt in college, though not well, but I’m still pretty sure I’ve never met a Bran.) I recognized my brain glitch part way through the Winterport rough draft, but finished the book with Britt so as not to throw myself off even more. Fortunately, my consonant blend fixation was a relatively easy tweak. Graeme has now risen from Britt’s ashes, thanks to a quick find and replace. I did have to change some dialogue as well—Sydney can no longer ask her sister what it’s like to be married to a nationality, for example, and he no longer has a double-barreled B name (Britt Bargas) to make Sydney question his parents’ sanity. But all in all, I wish the rest of my edits were so simple.