It’s Friday, and that means it’s Blog Post Day! Bet you didn’t know that, did you? Well, that’s just one of the status-type things I’m going to share on my two-days-early Summer Schedule Post. (Please–no songs from musicals; I am so not a musicals person.) 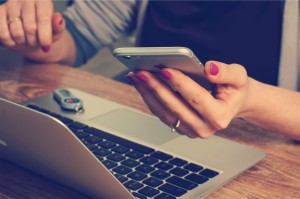 Until recently, I’d been writing a couple of blog posts a week, but with no set schedule, just posting one every four or five days. That meant within a couple of days of posting, I was thinking, Is it time yet? When did I post? What am I going to write about this time? Not that it’s really a hardship—I enjoy writing blog posts—but it’s one of those things that was always hanging over my head. Then I noticed I’d passed seventy blog posts; this one will be Number Eighty. (Is that a chocolate or paper gift? If it’s chocolate, I prefer mine dark, FYI.) Suddenly I was overcome by a math compulsion: if my posts average 500 words (and I’d guess it’s more like 750), that’s more than 35,000 words total, i.e. a novella. As much as some people (my blog peeps) enjoy reading my digital ramblings, I’m guessing more people would rather have another book. My compromise, to help my sanity and my production schedule, is to have a regular Friday blog post. I may occasionally post at some other time if the mood (probably for procrastination) strikes, but I will always post on Friday. (That way you have something to read at work when it’s too early to walk out the door, but you’re honestly done for the day.)

Of course, I don’t want to be too productive—I might break out in hives or something. So I’m thinking I’ll experiment with some audio this summer. I mentioned on a previous post how much I’d love to do audiobooks of the Sydney Brennan Mysteries. My sales just aren’t consistent enough yet to tempt a narrator to do a royalty split, but as soon as they are, I am all over it. I do love (seeing a pattern here?) the idea of making your daily commute or workout a little less Circle of Hell. In the meantime, I’m leaning toward recording a few things myself and posting them here, like the opening chapters of my books, maybe some Magpie Moments posts or whatever else strikes my fancy. I am open to suggestions, so feel free to put something in the comments or drop me a line through the contact form. 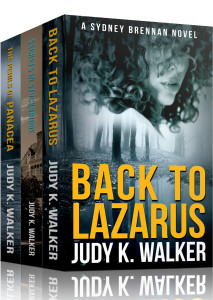 This summer I will be releasing my first Sydney Brennan Mysteries box set—no exact date, but probably by the end of the month. The first three ebooks will be bundled together for $6.99, and it will be available with the usual suspects (Amazon, Kobo, iBooks and Nook). Not all retailers are crazy about 3D box set images, and they can be a little difficult to make out as a thumbnail, but they’re just so darned pretty on the screen!

Finally, what’s the status of the next Sydney Brennan Mystery? It’s a novella, and the working title is No Safe Winterport, although, as I told my newsletter folks, that may change. Sydney visits Central Florida in an effort to reconcile with her estranged sister, but when they witness the murder of Mickey Mouse—just kidding! About Mickey Mouse, that is. She does visit her sister, and non-theme park complications ensue. I wrote last month about the challenges I’m having with this installment. [Slight digression: I recently learned that Michael Chabon spent five years and 1500 pages on his second novel before finally abandoning it. He then wrote The Wonder Boys in seven months, and followed it up with the Pulitzer Prize-winning The Amazing Adventures of Kavalier and Clay. Bless his heart (in the sincere, not Southern ironic way), now I love him even more.] Okay—back to Syd’s novella. I have a rough draft. I’ve filled in all of the what’s that plant called? when was this hotel built? do they say snow cone or shave ice? kind of notes. But overall I’m still not happy with it, so I’m taking this opportunity to hone my editing craft. 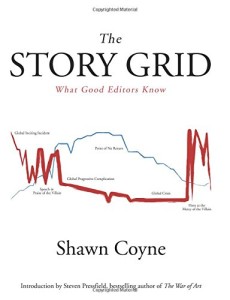 Shawn Coyne’s The Story Grid is his treatise on editing (and creating) fiction, distilled from twenty-five years in the publishing business, working with many authors whose work I admire (including Michael Connelly and Ian Rankin; by reading this book, do I now have two degrees of separation?). The Story Grid is a way of understanding the foundations of Story and Genre, but it’s also an analytical system, complete with spreadsheets and graphs (and posters—oh my!) that get the geek in me all kinds of excited. Winterport is my trial run, my guinea pig, my taking her for a spin. I’ve started the spreadsheet, and let me just say this is not the most fun I’ve had with Excel, a program that isn’t exactly associated with rollicking good times to begin with. But it is helping. Believe it or not, just numbering every scene in the book highlighted some big issues. The acts of quantifying word count and value shifts and duration (and ten other columns) forces the distance necessary to be in Editorial Mind. I’m really excited about the process, but it is time- and brainpower-intensive. I’m not sure how long it will take, but I still anticipate releasing the novella by the end of summer.

As every elementary school child knows, summer seems to end almost before it begins, so what else lies on the horizon for Sydney? I haven’t started them yet, but the next couple of novels are banging around in my head saying Pick me! No, me first! (Especially on dog walks; I’m lucky I haven’t broken an ankle stepping in a lava tube.) Rather than introducing a bunch of new characters, I’m tentatively thinking the next book will focus on one of the people closest to Sydney. That’ll be followed by one that features someone you know in parallel with someone you don’t, while revisiting some several of my favorite characters I hated to leave behind (I’m doing a little Happy Writer Dance about that). So there you have it–both vague and unhelpful, yet so exciting in my head. With that, I’m off to walk the dog and listen to the voices. If you see a cute white dog whose leash disappears into a hole, please stop and give me a hand.

[Woman with laptop by Wilfred Iven from stocksnap.io]