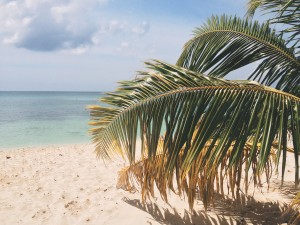 It’s a sad day when you notice that the boogie boarding scab from your vacation is gone.

Sorry—was that TMI for everyone who doesn’t work in a medical field? My 13 year-old niece gave me lessons. I’m afraid I wasn’t a very good student, perpetually raking my knee across the sandy bottom in the shallows, trying to ride a little bit of water foam on a bent piece of synthetic foam, but it was fun. I even caught an almost-wave my last day out that made me whoop in a manner she would have approved of, if she hadn’t already returned to school. In fact, I started my day and capped off most afternoons in the Atlantic while we were on vacation. Easy to do when you can walk across the highway to the beach. Back at home, I can see the Pacific if I drive toward Hilo, but I haven’t so much as touched its chilly shores since we’ve returned. Sigh.

But if the physical evidence of fun is gone (the Florida tan has faded, too), so are the mental scars from the less-fun bits. Lessons learned on this trip: don’t go on vacation immediately after ebook launch (and before paperback launch); if you do, make sure you’re going somewhere with internet access; and, if you think you don’t have internet access, make sure you actually have no access before you go on multiple internet pilgrimages. I was most concerned about the logistics of The Perils of Panacea paperback launch before we left Hawaii, imagining bizarre scenarios when I clicked to have the proof copy delivered to Florida. However, the paperback launch was, surprisingly, the simple part. The ebooks turned out to be a pain in the tookus. (That’s a word meaning the bum, the bottom, the tush, not took us, in case I lose my battle with the spell checker in the end—ha! Another synonym.)

I sort of had limited internet access on my phone, when the moon was right and I stood on one leg with both arms in the air. My phone would do a Google search, but I couldn’t click through to the results, and it would show me my list of emails, but I usually couldn’t open them. My phone also didn’t work as a phone in the traditional telecommunications sense—I couldn’t receive incoming phone calls, but I could receive texts. (The phone apparently thought the mainland was a foreign country; at times I did,too.) No problem, right? It’s 2015—no internet access is just a good excuse to go to a coffee shop. There were no coffee shops. (You should read that in an booming, all-hope-is-lost kind of voice.) The closest wifi was across a bridge (over the river and through the woods…) at a Starbucks on the mainland. (Entrepreneurs take note of this stellar business opportunity that doubles as a service to the community.) 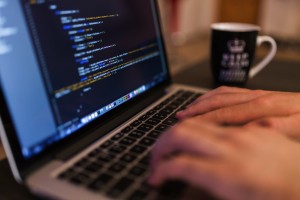 In addition to the general stress of having no internet access to indulge my post-launch compulsions, a sharp-eyed Kindle reader (bless you, Lissa!) gave me a heads-up that there was a typo in the ebook. Except it wasn’t actually a typo. Apparently, ereaders have no sense of geek humor, being unable to read the symbol π. (WordPress doesn’t do a great job with it either.) Fortunately PDFs are practically Trekkies with their geekitude, so there was no issue with the paperback, just the four versions on four platforms of the ebook. I’d skimmed through each and checked what I anticipated could be problem areas before publishing, but obviously I’d missed Chapter 29. It looked fine in the Kindle Previewer, but pulling out my iPad, I was horrified to find that Mike’s T-shirt “π r , π r round” was populated with alien heads in square boxes instead of pi symbols. (The Kindle Previewer also shows Panacea’s cover as the Scrivener default cover, literally “My Name My Great Novel” on a gray background, so for me it’s rapidly approaching the Nook Previewer in its lack of credibility.) Cue the multiple trips to Starbucks over multiple days to post my problem to a Scrivener forum, check for a response, get a response (AmberV rocks—what a genius!), change my text to raw html, output and upload the new files to all the platforms. And download from at least one of the sites to make sure the change held. Phew.

Of course, a day or so after I resolved this issue, I figured out that the secured wifi I picked up everywhere in Florida (seriously—how do they get that out to manatee-loving lagoons and through the walls of houses? I probably don’t want to know) could be purchased for an hour, a day, or a week. Thus Lesson #3, hopefully learned. And I’m back to sitting at my keyboard, wondering when I can get another vacation. After all, if I’m going to boogie board in the 2016 Olympics, I have to get on my training…

[Sandy Beach by John Price and Coding on laptop by Negative Space, both from stocksnap.io]