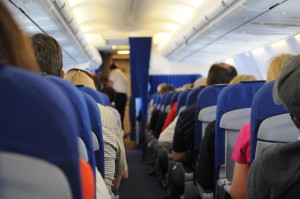 My husband and I just got back from a couple of weeks on the mainland. Florida, to be more precise. Not Tallahassee, but close-ish to Sydney’s childhood home. Not that this trip was anything about Sydney; it was about seeing our families. But it is hard not to think in terms of Sydney’s context anytime I set foot in Florida. We had a good visit, one that can’t even be marred by the fact that travel has become such a monumental pain in the ass. I was going to treat you (ha-ha) to a mini-rant on the subject, but the mini-rant quickly matured into a full-blown one, so you’re spared this time. I’ll just say that from the Escher-esque toll roads to the spin-the-wheel security procedures to the overbooked airlines, we’ve decided the next time we leave the Hawaii, it might have to be by boat. (What are the permissible carry-on dimensions for traveling by outrigger canoe?)

We arrived home after 18+ hours of travel to find that, in the absence of humans and canine and feline, squatters had moved into our house. I suppose we should be thankful it wasn’t the meth lab variety, but rather four-legged ones, specifically rodents with a taste for fine beverages. There were shards of Kaū coffee beans from a previously unopened bag of the good, company coffee all over the kitchen floor, and the side of a bag of raw cacao powder had been removed for easy access. We already knew our neighborhood rats have a taste for Kiss My Face olive oil soap (no idea why; perhaps they were introduced from Italy), so we’d hidden our open bar in a plastic container before leaving. Not to be thwarted, they chewed through the container and gnawed on the soap corners. (I thought perhaps they were on the Paleo diet since they didn’t bother the grains or granola bars while we were gone, but their tastes have expanded as the rat removal saga continues.) We cleaned up, then settled in bed with books, trying to time the onset of sleep coma to overcome our six-hour time difference jet lag. We fell asleep glaring daggers skyward at the sound of the occasional rat running across our metal roof. 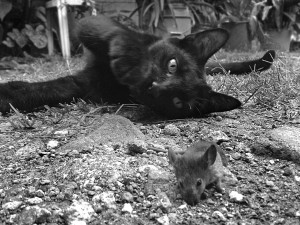 Both of us woke intermittently throughout the night, pointing cellphones and mini-flashlights at various noises (imagined or otherwise) without success. Finally at around 3 am, a metal lunch container fell to the kitchen floor with a bang. It was on! We leaped (okay—stumbled) from the bed in hot pursuit. My husband apparently wasn’t wearing his rat-hunting glasses, so there was a lot of me pointing and him asking, Where? I found myself face-to-tail with the not-so-little rodent bugger when he climbed the back of a bookshelf and came to my senses while reaching for him with a bare hand. Instead my husband chased the rat into the bathroom, slamming the door behind them. I felt like I was watching a Tom & Jerry cartoon, or at least listening to one, as the two mammals of dramatically different sizes thumped around inside, occasionally casting shadows across the crack below the door. Finally, there was a cinematic moment of silence… and my husband—my hero!—flung the door open, triumphantly holding our tatty lavender laundry bag aloft. The rodent inside was still with humiliation.

However far my husband trekked with his defeated foe, either it wasn’t far enough or the rat had called for reinforcements. The next night, our cat didn’t perform nearly as well as the humans had done. Ninja woke us several times, but just for grins and giggles, not because he was defending the realm. Meanwhile the rat(s) expanded their menu to include 7-grain hot cereal and grits. I’m willing to give the cat one freebie—24 hours to shake off his kennel trauma—but after tonight, we may start interviewing new rat-catchers.

[Photo of plane interior by Skitter Photo and of cat with rat by F Romero from stocksnap.io]