You may have noticed that I have—I mean, Sydney has—a thing about food. Okay, so most of the food on my blog has shown up in my Magpie Moments, bits of Sydney’s world that I snatched and repurposed from real life (bad iced tea, no-bake cookies, Italian restaurants, and coffee shops; but the fried corn nuggets were all me). I guess that means we both have a thing about food. It was only a matter of time before I made my way to donuts. 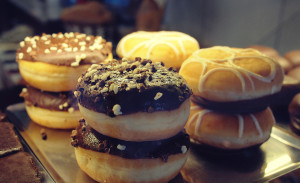 “You want to get something to eat?” I asked. We’d had toast with our coffee, but it would be something to do.

“Why, you think it’s the last meal I’ll get? That they’ll try to starve a confession out of me?”

“No, that’s what Roger’s here for,” I said, except that he wasn’t here yet. “How about that bakery where everything tastes like donuts?”

JD laughed. “I know the one you mean. I think it’s over in Milton, and it’s probably not open on a Sunday morning.”

-Sydney Brennan and JD Devereaux, The Perils of Panacea

For about half my time in Tallahassee, I worked for a state agency doing death penalty appellate work. It was supposed to be a regional office, with most of our cases from north Florida, but they were really scattered all over the place. Our office had a warehouse-like area with huge wooden shelves of case files, reminiscent of the last scene in Raiders of the Lost Ark. No matter how many of these cases you were assigned to, as an attorney or an investigator, in practice you were usually focused on the hottest fires in front of you. Missing a deadline in a death penalty case is not an option. Misread the law or miscount the number of days since your client was convicted, and he could lose his right to a federal appeal. No matter how compelling your evidence of mitigation or misconduct or even innocence, a court would not hear it. But I digress. (To paraphrase Richard in Back to Lazarus, Don’t get me started …) The upshot is that I went a good, long while without spending much time in the Florida Panhandle (west of Tallahassee, that is). Then a particular case near Pensacola, one of my favorite clients, became active. Suddenly I was spending time visiting Panhandle prisons and meeting with family and witnesses. And buying donuts.

I’d vaguely heard about the Milton bakery before, but I suspect the investigators were much more attuned to those kinds of things than the attorneys were. Spend enough days and nights on the road, with no guarantee of accomplishing anything for your client, and you’re bound to want a cookie, metaphorically and literally. I don’t remember anything about my first bakery trip except my investigator car-buddy taking pastry orders. It wasn’t one of those, make-an-announcement-over-the-intercom or fill-in-a-doodle thing (being long before the days of online doodle things), but we did have a few requests. I never placed an order myself, but I did do pick-up a couple of times and took advantage of the kindness of people who brought back extra. I learned that it didn’t really matter what you ordered: everything really did taste like donuts. (Everything being cookies and pastries; it wasn’t exactly the kind of place you’d shop for a loaf of bread.) Maybe they used the same oil or something. Whatever the reason, it wasn’t necessarily a bad thing, so long as you liked donuts. And who doesn’t like donuts? (If you don’t, I don’t want to know; some clandestine government agency could be monitoring my website and, while you don’t have to want them every day, a blanket aversion to donuts is clearly un-American.)

Incidentally, I think the bakery is still there, and I pinned a photo of their display case on my The Perils of Panacea Pinterest board if you’re feeling hungry.