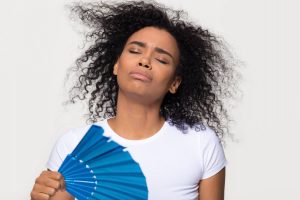 I had planned to write a Stories I Love post this week—even had the subject picked out. (No spoilers, I’m not saying.) But you know what? I can’t think straight. You know why? I’m assuming you read the title and can guess. Everyone together now—it’s too fricking hot!

We had a few blessedly cool, overcast days over the past couple of weeks for a taste of much-needed relief, but not enough. I was chatting with a local woman the other day who said, “I never thought I’d see the day we needed air conditioning in Hawaii.” Of course, no matter how hard you try, it’s difficult to have any kind of objective perspective about weather, or anything else that has such a direct and pervasive effect on every aspect of your life.

We have a rain gauge at our house with pages of data I haven’t bothered to enter into my spreadsheet. If I had, maybe I could tell you whether the rain patterns have been off (feels like it). We don’t have a thermometer, so I can’t tell you if it’s been hotter than usual (feels like it). Nor do we have an anemometer (wind speed—tuck that one away for your Sunday crossword), so I can’t confirm whether the trade winds have been falling down on the job (feels like it). And we don’t have a hygrometer (a device to measure humidity—won’t you be rocking that Times this week?), so I can’t tell you if it’s been disgustingly drippier than usual this summer… 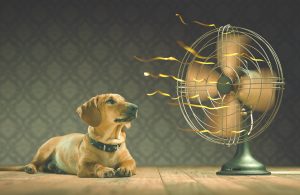 Screw scientific objectivity—the humidity has been ridiculous! Appalling! And I will fight anyone who says otherwise. Don’t worry—it won’t be a death match. We’ll both pass out in a minute or two.

Even poor Travis, the lovable dingbat dog whose brain doesn’t always know when his bladder or bowels are going to strike, has learned to communicate that he’s hot. Other than by panting, I mean. Living off the grid, we don’t have A/C and conservatively turn the fans off soon after the sun goes down. Travis stands in front of the immobile floor fan looking pitiful, his eyes saying, Please put your opposable thumbs to good use before I die. Which brings me (finally) to my Friday Five.

Travis hasn’t been at his best lately, so to help him stay cool we aim a cordless fan at him when we retire. We’ve trained ourselves not to trip over it if we hear him or Fred or feral pigs wandering in the night. The bigger issue: battery life. Even our savior Ryobi batteries only last so long (best guess—three to five hours on Low, depending on the model). That means waking up when Travis starts panting and switching out the battery pack by the light of a glowing phone screen. Or just by touch, preferably not the touch of the heavy pack landing on your toes. 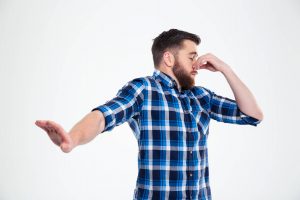 We keep Mason jars of grains and legumes and whatever else is supposed to keep for a while on a kitchen counter. I opened the neglected brown rice recently and thought, Gee, that’s an interesting smell. It wasn’t bad enough to make me retch or drop the jar, but just aromatic enough for me to wrinkle my brows and reach for Google.

Turns out the extra oils in the outer shell of brown rice make it more vulnerable to our hot kitchen than its pale, nutritionally bereft cousin. The unopened brown rice tucked in the cooler corner cabinet smelled fine, but tiny bugs had teleported through the plastic bag. (Obviously the universe did not want us eating rice that night.)

Did I mention hot kitchen? After the rice, I checked the rest of our containers. If my sunflower seeds had been gone, too… well, there’s really no way to open a can of whoop-ass on a kitchen you live in, so I guess I’d have settled for being very sad.

4.  Redneck A/C (placing ice in front of a fan) may or may not be effective.

Beware—this one is a rabbit hole, and there is no internet consensus. Where is the Mythbusters episode when you need it? Lots of people get hung up on the energy required to make the ice, which only matters if you’re trying to be more efficient versus less uncomfortable.

5.  My latest favorite iced beverage indulgence in this heat is—promise you won’t injure yourself rolling your eyes—matcha latte.

You might have noticed I am all about beverages, especially the caffeinated ones. It’s French press first thing, though recently I’ve done the occasional small batch of “regular” cold drip coffee for the mornings when the heat hits too early and I can’t live without my fix. I usually hold off on iced tea until the afternoon (touch of mint, not-quite-Southern sweet). Then if my husband makes it home at a reasonable hour, we partake of home-brewed, cold drip French Market. But sometimes the amount of milk and agave needed to mellow the strong chicory flavor make it feel a little heavy. 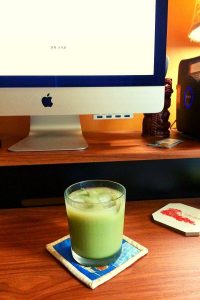 Matcha is a shade-grown Japanese green tea that’s ground to a fine powder. It contains caffeine—not as much as coffee, but it does give a nice, non-jittery alertness. Supposedly this is because of an amino acid, and the tea is good for you with concentrated antioxidants, blah, blah, blah… Bottom line for me: it tastes good. Just a teaspoon dissolved in water and topped up with some almond milk and a touch of honey.

Disclaimer: I’m one of those weirdos who prefers eating greens to fruit.

Here I am toasting The End of Sydney’s latest adventure, Grave Truth. By the way, I blurred the text on the screen. You cheeky buggers. But maybe I’ll be coherent enough to share something about that next time. Like maybe, just maybe, the brand new gorgeous cover. 😉