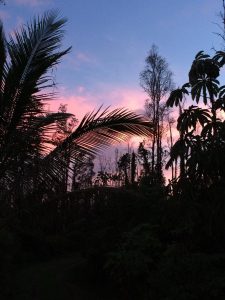 If you’ve been reading my blog long, you’ll know that 1) living on Hawaii Island isn’t like living in most places, and 2) it probably also isn’t what you expected.

Oh, yeah—you may recall a few posts ago, I’d just returned from a trip to the mainland and promised video of something that awaited us here. Well, I’m a little slow, but today’s the day.

It was dark and rainy and we’d been crossing continents and oceans and weren’t sure what we were seeing in the shadows of our carport. Whatever it was, it wasn’t going anywhere. Yes, something had moved into our carport. No, it wasn’t a feral chicken this time (see Hunkering Down).

Feral pigs are a regular visitor to both my life and my blog. In fact, this isn’t even the first Feral Pig Friday. But the level of activity on our property has been unusual this summer. It accelerated when a young sow had a litter of eight—or nine? maybe ten?—piglets shortly before went to the mainland. Seriously. We’d try to count them running across the driveway in front of us and I swear they multiplied like something out of a science fiction movie.

Apparently while we were gone, they moved into our carport.

We—humans and pigs—spent the next couple of weeks surprising each other. (They’re little, especially when they’re cuddling, and they don’t seem to hear very well. Maybe not see very well, either.) And we’ve been dealing with all of the other random annoyances that occur at the intersection of nature and human habitation.

Feral pigs will eat anything and everything—including ornamental plants—except for collard greens. They knock things over, dig holes, peel the thin layer of cindery grass from the lava rock. Rude much? But they are also fairly adorable. 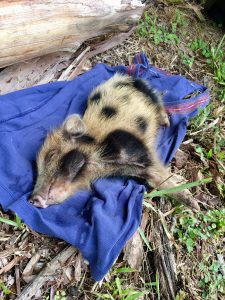 A few weeks ago, we were running behind (of course) and I was walking a reluctant Travis up the driveway to avoid a post-breakfast poop in the house while Paul left for work. Suddenly something at the edge of the carport caught my eye.

Paul has been stripping an o’hia post, and curled up right under its edge was this piglet. Poor little bugger. He’s still alive in the photo, but obviously wasn’t much longer for this world and had returned to a place where he felt safe.

I checked on him periodically and tried to keep him comfortable, making sure the fire ants weren’t swarming him and giving him fluids when he’d take them. (Despite his size, he didn’t know how to “eat” yet.) When he died a few hours later, I was both sad and anxious.

How long do you really want a dead piglet lying next to your car in a tropical climate?

Obviously I had to bury him.

Did I mention we have no soil? I roamed our driveway with a shovel and a pick, trying to find a puka along the side I could transform into a sufficiently deep grave. Yeah, not so much. So I topped it off with more rocks and hoped for the best.

In other words, if you ever wonder why it takes me so long to finish a book, it’s not because I’m sipping Mai Tais.