I’m about to share something that won’t come as a surprise to anyone who’s ever lived with me, met me, or perhaps even read my blog posts.

Shh… Don’t tell anyone, but I’m not very organized.

Yeah, I know, big shocker. I don’t consider it a character flaw exactly, but it is something I need to work on. And yet, I can’t help feeling that sometimes the universe doesn’t help. Case in point: the release of the next Sydney Brennan novel, Grave Truth.

This is where I gratuitously whip out my new cover again and do a happy writer dance.

(Excuse me for a moment while I scare my pets.) 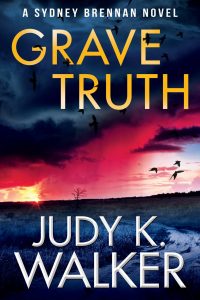 Hired to track down a teen runaway, Tallahassee PI Sydney Brennan knows that staying on the right side of law enforcement won’t be easy. But when she also agrees to help a dying man investigate a long-shuttered juvenile detention center, it becomes downright impossible. And she’ll soon discover that losing her PI license is the least of her worries.

I’m so excited to share Grave Truth with you next month! But note, I said next month. I didn’t give a specific date. (Refer to the “not organized” part above.)

I have so much to do over the next thirty-ish days that it’s a little bit like the night sky over rural Hawaii (when it’s not raining): a vast field of scattered, shiny lights that are hard to distinguish or prioritize. Oh, that looks pretty! But what about that light, with a hint of red? Is it a star, or a planet? Or, if you’re an imaginative mystery and thriller writer, a weapon’s laser sight illuminating the limbs of a nearby dead tree. Duck and cover!

Being organizationally-challenged is a lifelong pattern for me, but I believe I get a freebie this week. My body is still rehydrating and my brain recovering from last week’s indie author conference in Las Vegas. And what a conference it was! I learned so much, including that Weezer’s Sweater song (Undone) is hard on your throat after a long night of karaoke in a dry climate.

On my return, the first breath of humid, East Hawaii air felt amazing in my lungs. It felt less amazing on my body after a shower the next morning. Although I’d quickly learn not to complain about the finer points of showers. (We seasoned writers call that foreshadowing. 😉)

So, now that I’m back I’ve hit the ground running with my launch prep and three-page To Do list from the conference, right? Yeah, nah. (I’m practicing for my grand Kiwi vacay, per the Late Night Bret Mckenzie and Lucy Lawless instructions.)

And this is where I start blaming the universe.

November 2019 has been dry in East Hawaii, with about a quarter-inch of rain on a single day all month. That probably doesn’t sound horrible, especially to drought-stricken Californians, but November is typically a wet month for us. It’s also more than enough time for grass to begin browning and for our neighborhood to become the backdrop of a Mad Max movie. Within a few dry days, gray dust from the gravel roads (using both of those terms loosely) coats the shrubs and trees. Our white Rhodesian ridgeback Fred returns from walks looking like the cover of the classic Harry the Dirty Dog picture books. (Mentioning Fred, yep, that would be another instance of foreshadowing.) 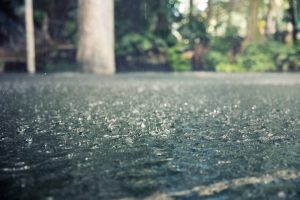 Saturday night, the day after I returned home, our dry spell broke. But not just with rain, with thunderstorms. From midnight to 5 AM. And then again on Sunday, midday. And at night. And on Monday. And Tuesday. Cue the endless phone notifications of flood advisories and road closures. Needless to say, our doggie drug stash is running low! As is our sleep.

Wednesday morning, my husband and I had to juggle scaredy dog care, which meant a prophylactic chill pill for Fred. Of course, then Wednesday was our first day without thunderstorms. Not that I’m complaining, but poor Fred! He may have to go into detox.

I picked Fred up around lunch at my husband’s office. I knew we were in trouble when one of my husband’s colleagues tried to give Fred a farewell treat, and Fred couldn’t quite figure out how to sit. I don’t mean on command; I mean on his butt. His hips seemed to dissolve, his tail bent at an uncomfortable looking angle, and his hindquarters slid on the carpet. The carpet he would trip over on his way to the car.

Getting him in the car was challenging, but getting him out of the car when we arrived home was even worse. Fred was perfectly content to lie on the backseat indefinitely.

My fallback strategy when dealing with stoners of all species: snacks. 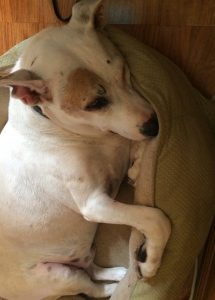 I was able to coax Fred to stand with treats, but still not to exit the car. My desperate manhandling (woman-handling?) resulted in a seventy-five pound dog stuck sideways between the front and back seats, back leg at an awkward angle that I prayed would not do lasting damage. I nearly gave myself a hernia wrenching him free. But he did not fall on his head in the carport.

I’m writing this on Thursday, and though Fred (thankfully) hasn’t been medicated again, he’s still doing a lot of sleeping, punctuated by incessant and aimless licking.

Yeah, so not a lot of human sleep, and difficulty with focus.

Also, did I mention our water pump went out on Sunday. Of course on Sunday, when nothing is open to buy a new one. So no running water. Monday’s “shower” was… invigorating. Yes, that’s a positive word. It was an invigorating adventure with bucket, hose, and very cold catchment water. At least it wasn’t cold outside, and I have an excellent DIY husband who installed a new one in time for Tuesday’s shower.

By the way, you know what else you can’t do without water? Stinky Las Vegas laundry. The conference venue was a casino hotel with fifty years of smoke and broken dreams permeating every fiber of its being. And consequently every fiber of my clothes.

So where was I? Oh yeah, prepping for Grave Truth’s launch. Maybe I should get back to that while I’m still… focused? 😂