The date was chosen to celebrate the birth of Eugene Francois Vidocq in 1775. Apparently a master of disguise, Vidocq was a criminal who escaped from custody and spent years on the run, only to eventually turn informant and secret police agent.

Vidocq founded the French state security police force Sûreté Nationale, and in 1833 he started the first known detective agency. Many consider him to be the father of modern criminology.

But there’s another reason today is the perfect day to celebrate private investigators.

On July 24, 1916, a man was born who would revolutionize the private investigator fiction genre.

I was the kid who read all of the Nancy Drew and Hardy Boys books in our small library. (I’m still waiting to reread The Westing Game. It made such an impression I’ve never forgotten the twist at the end.)

I also grew up in the Golden Age of cheesy PI television shows. The Rockford Files theme was imprinted on my brain as a toddler. Then there was Remington Steele, Magnum P.I., Simon & Simon, Riptide. (I suspect Spenser for Hire was relatively short-lived because it was in frigid Boston instead of somewhere sunny.)

But it wasn’t until I reached adulthood that I really fell in love with the private investigator genre.

I was in law school in New Orleans at the time, and I didn’t really have a lot of time or inclination for reading fiction. It’s like when you’ve gone too long without eating and lost your appetite. It takes just the right dish to bring you around.

My husband (then boyfriend) and I stopped at a used bookstore in the suburbs, and something caught my eye. I’m guessing it was Nightmare in Pink (that cover is very eye-catching), but it doesn’t matter which one it was. It was my introduction to John D. MacDonald’s Travis McGee, and I didn’t stop with the first one.

Travis McGee was my dish. So to speak.

McGee is the kind of man you either want to be or be with, depending on your proclivities.

Living aboard his houseboat the Busted Flush (so-called because he won it in a poker game) in Fort Lauderdale, he takes his retirement in chunks. When the kitty gets low or a friend needs help, he comes out of retirement and shifts into private investigator mode.

McGee is always in philosopher mode, railing against the destruction of the Florida coast, rampant consumerism (“A man with a credit card is in hock to his own image of himself”), and the other ills of modern society. My husband probably read 60% of that first book because I read it aloud to him. As an example of MacDonald’s brilliance, watch him take a nothing’s happening moment—just the protagonist hanging out waiting for someone on a New York street—and turn it into classic McGee in Nightmare in Pink: 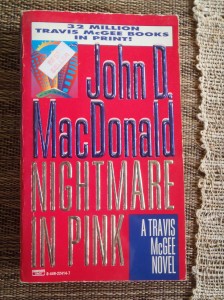 I whisked the soot off the wall by the entrance steps and sat and waited for her, and watched the office people bring their anxious dogs out. You could almost hear the dogs sigh as they reached the handiest pole. There was a preponderance of poodles.

This is the most desperate breed there is. They are just a little too bright for the servile role of dogdom. So their loneliness is a little more excruciating, their welcomes more frantic, their desire to please a little more intense. They seem to think that if they could just do everything right, they wouldn’t have to be locked up in the silence—pacing, sleeping, brooding, enduring the swollen bladder. That’s what they try to talk about. One day there will appear a super-poodle, one almost as bright as the stupidest alley cat, and he will figure it out. He will suddenly realize that his loneliness is merely a by-product of his being used to ease the loneliness of his Owner. He’ll tell the others. He’ll leave messages. And some dark night they’ll all start chewing throats.

By the way, this is just where I randomly opened the book. Two out of three pages has something compellingly quotable.

The man broke me for other genres. I’ve read some of MacDonald’s other books and enjoyed them as well, but nothing compares to Travis McGee. Oh, and did I mention that today also happens to be John MacDonald’s birthday?

So, who’s your favorite private investigator?