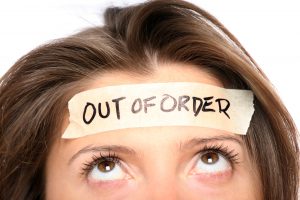 Guess who’s frizzle-frazzled this week? Honestly, I’d guess at a minimum most people in the United States, but I can say without equivocation that I AM. And how.

There’s the baseline political insanity. I don’t talk politics here, but if you’re reading this post far enough in the future that you’re no longer memorably scarred, just an FYI that we’re in the middle of Kavanaugh Confirmation Crazy. (It took remarkable restraint to use the word crazy rather than a much naughtier and far more satisfying word that starts with c and ends with a similar sound.) I’m proud to say I’m very disciplined about my news consumption while working. Unless I’m in the car (wily radio), I don’t check what’s happening until my evening iced coffee, conversation, and Twitter feed binge with my husband.

—Yes, I said evening iced coffee. And you thought my language was naughty.—

But I still catch snippets in text messages or email subject lines or when searching for something totally unrelated online, hints of shiny, crazy headlines just a click away that are hard to resist.

On top of that distraction, we’re having dog health issues: one simply itchy and scratchy, one licky, and one much more serious. The kind of serious that prompts deep internet research rabbit holes. My husband has gotten far too proficient at gathering dog urine in a cup. (To be fair, with the massive amounts Fritz pees it’s not as difficult as it sounds, but if you’re going to try it at home, I’d advise you to have lots of paper towels and soap handy just in case.)

I’ve gotten far too proficient at bifurcating my brain while trying to work. Does Fritz need water? Does Dingbat Travis need to be reminded to pee outside? Is that sound a feral pig (they’re very active now) or a dog determined to get Leptospirosis by drinking out of the fish pond? That’s right, we’ve got three dogs. So I’m tri-furcating my brain. Who’s eating dirt? (Or worse?) And then there’s the cat. Is Ninja killing something inappropriate? Sleeping in Travis’s crate on his new-ish bed, which might cause a reversion to the bloodbath days? Brain quad-furcating. Plus there’s (hopefully) the me working part of my brain. Quint-furcating or penta-furcating? (They both sound like words we might have heard during the Kavanaugh hearings.)

Yep, I’m frazzled. There are plenty of other minor contributing factors to my frazzledom (most involving me sitting in front of a computer screen squinting at a program or interface I thought I remembered how to use), but there’s one more major one.

Psstt… I hear there’s this new book coming out. 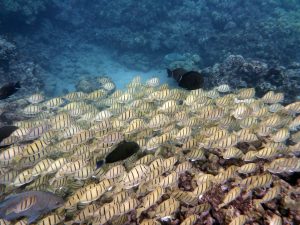 YES!!! Because good things can be frazzling, too. Heir, Dead Hollow Book 3, is now on Preorder everywhere with a release date of October 15, 2018. (It’s only on Preorder so I could put the links everywhere ahead of time instead of waiting.) I’m so psyched to share the trilogy conclusion with you, but there are so many manini tasks involved in making that happen. (Manini is your Hawaiian word of the day. It often means stingy but in this context it’s small or insignificant; it’s also the word for the convict tang you often see schooling on reefs and nearshore. You’re welcome.)

One of my less onerous tasks was posting Heir Preview chapters on the website, which you can read here. But DO NOT read anything from Book 3 before you’ve read Books 1 and 2! This is a true trilogy and the books must be read in order. You have been warned. And by the way, you think we’re frazzled… poor Adam Rutledge! And JJ. And Luther. And don’t get me started on Harlan.

To celebrate the upcoming release, last blog post I ran a Dead Hollow-themed Giveaway. Congratulations, Andrea from Syracuse! She’ll be getting her Harlan Country mug just in time for hot chocolate season. I attended college in almost-neighboring Western Mass and still have eyelash-freezing flashbacks—she’ll need it! 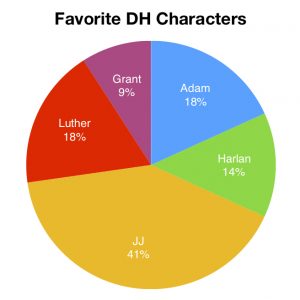 Just as with the Sydney Brennan mug Giveaway a couple of months ago, I asked everyone who entered the Harlan Country Giveaway the identity of his or her favorite character. And just as with the previous survey, the results kinda surprised me. Jennifer Jane (JJ) Tulley was the winner by far, getting more than twice as many votes as the characters who tied for second, our main protagonist Adam Rutledge and Deputy Luther Beck. (Admittedly it was a small voting pool, but we won’t discuss how my own favorite Harlan Miller performed.)

Of course, not every Dead Hollow character was a survey choice. Inclusion was roughly based on their significance in Prodigal and Founder. Two other characters that weren’t in the survey get much more page time (and go far beyond frazzled) in Heir, and one even gets a point of view. In fact, you can probably guess which two if you read the Heir Preview. Not that I’m trying to tease you or anything. 😉