This morning, I was awakened by loud, endless dog licking.

But after that, I was nudged (you’re still awake, right? because the dog’s still licking) at around 6:20 a.m. by a military-sounding helicopter. (A pair flew so low earlier this week, I could feel it in the floor and had flashbacks to Airwolf. Ahh, Stringfellow Hawke…)

A few minutes later, someone in our neighborhood starting mowing with one of those monster machines big enough to mount a gun turret. Who mows before 6:30 a.m.?? My mower husband’s answer: someone who wants to get it done before work.

But back to the helicopter.

We’re still hanging on in jostling, lava-burbling Lower Puna. But still crazy times, too. I wrote last week’s post before Friday’s Richter 6.9 earthquake. Yeah, exciting stuff. Paul was home between meetings, making lunch, and had the foresight to turn off the stove on our dog-herding way out the door. Have I mentioned before, I’m glad to have him on my post-zombie (or lava) apocalypse team? 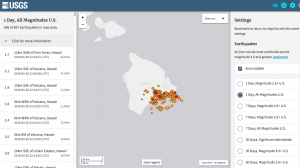 Saturday morning I woke to find we’d had over 500 earthquakes in the past 24 hours. Granted, most of those were small, but at some point you start feeling like you’re on a boat. Not the good kind of boat, where your body acclimates to the regular, rolling rhythm of the waves and you feel like you’re part of the ocean. More like a boat on a choppy sea, where you think you’ve got the hang of it until some random intersection of waves throws you sideways into a bulkhead. Then you stumble on deck and a wave breaks over the side, drenching you. So you feel like you’re part of the ocean.

It quieted down over the weekend and early this week, which seems like a good thing, except for all of the ominous speculation that maybe it’s a bad thing. (An explosive eruption at Kilauea’s main crater seems likely.)

Some residents have been able to retrieve important items they left behind in their flight, but the 2,000 or so people in the directly affected area remain evacuated. At last count, there are fifteen fissures, not currently erupting lava but spewing gases. The vog has been heavy, with occasional whiffs of sulfur and other funk, now punctuated with a hint of burning. 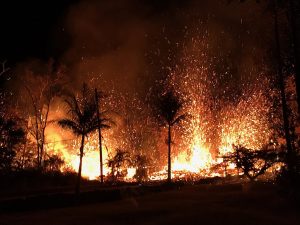 Leilani Estates on May 5, 2018, by USGS, via Wikimedia Commons

Of course, this is a fluid, ever-changing situation, and it’s easy for your mind to either spin out, or get fixated on something trivial. I thought I’d share a few of the things that can run through your mind in these unstable times.

Lest you forget about Dingbat, I must admit Travis is the most calm dog for the big stuff, but he is perpetually challenged by the day-to-day. Like recognizing when it’s time to go out. Just yesterday, I interrupted the morning feeding to chase him outside yelling like a drill sergeant, Go, Go, Go! He barely made it out the door, pooping on the door mat.

As Paul pointed out, barely is better than almost.

That’s a life lesson, there, folks.